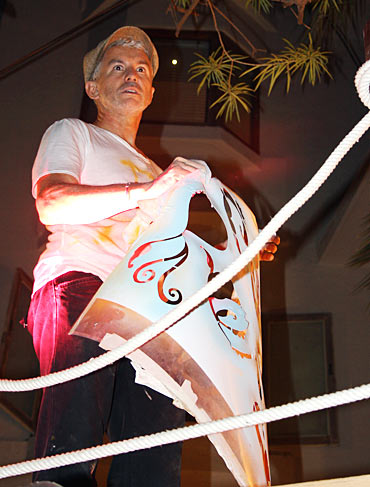 Media managers are a funny lot. They will promise you the world but when time comes to deliver, you'll see them giving sheepish smiles and excuses among many other things.

You can't blame them entirely. They usually get it from both ends -- the celebrities they handle sometimes make them feel miserable.

I often like to empathise with my friends in the profession. But today I'm far from impressed. They have pushed a scheduled interview meeting with Australian director Baz Luhrmann (Moulin Rouge, Australia) back and forth, cut the interview duration to less than half and finally make me share the already reduced slot with someone else.

The most ironic part of it is that usually clients of most such PR managers are unbelievably genial folks, or at least very media friendly. Will Smith, as far as I remember, was just that. As is Baz Luhrmann, nursing a broken finger.

Luhrmann and his painter friend Vincent Fantauzzo have been in India for a while now. Fantauzzo is an Archibald Prize winner but is perhaps better known to the world outside as the guy who painted the late actor Heath Ledger.

Luhrmann does most of the talking though he insists that the latter be part of every interview that is being conducted. You make a mental note of this as you walk past the gallery spotting the Ledger painting on a side and the one of Australian child actor Brandon Walters, which won the painter an Archibald Prize recently.

The two have just returned from a biking trip. They were travelling from Rajasthan to Delhi and have now returned to Mumbai's Le Sutra Hotel, a first of its kind art hotel in India. The photographs they've shot during this trip will be sold and the proceeds of which will go to Deeds, an NGO for the hearing impaired.

There is a casual air around the two. They walk out of a makeshift studio where they were shooting a show for a local television channel and invite us for a quick-fire conversation.

'It was an adventurous time with a rough moment' 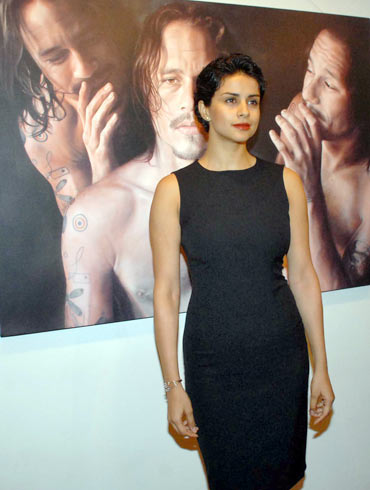 You seem to have had a rough ride in India.

Let's just say it was an adventurous time with a rough moment (laughs). I was driving on the highway to Delhi when a chap jumped out of the moving bus right in front of my bike! And there I was on the road in freezing temperatures! But overall, I must say that this has been a fulfilling journey. We'd set out to mix art, bikes, spirituality and fun. And you always need to take a certain degree of risk.

How did this whole thing come together?

We were rather disgusted with the situation (in Australia). Vincent's wife is Indian and around Christmas we decided we had to do something. Vincent has worked with Deeds with which the owners of Le Sutra are associated. So we decided to make a piece of public art (they have painted a mural outside the hotel in the Mumbai suburb of Bandra) and make the experience the art. That's where Royal Enfield came in and we went biking! Of course before all of it, I had to get a crash course in driving. And I mean a crash course (shows his fractured finger and laughs).

'Gatsby may not be my next film' 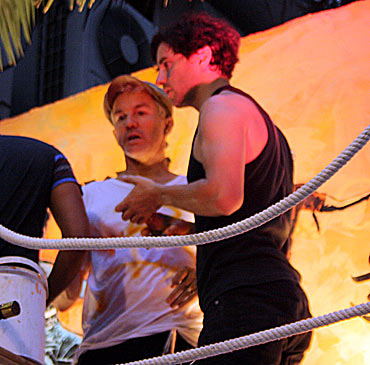 What are you taking back from your visit to India, besides of course the images and impressions from your biking expedition?

It seems like my synapses -- if I can call them that -- are open again. So there seems to be a change within me and in effect a change in my course is afoot which will get me get to the place I needed to be.

Talking about The Great Gatsby, supposedly your next film

Jazz Age in which The Great Gatsby is set is perhaps the most exciting of all phases in American history. What draws you towards it?

It's relevance to today's time. Jazz Age was when America believed that there was no top to economic expansion. Technology exploded, a lot of people became rich overnight, fabulous fortunes were made. People, who were nobodies, became millionaires the next morning. And then soon after like Icarus it all fell to earth. It all seemed relevant in the present day.

'Amitabh Bachchan is an incredible actor' 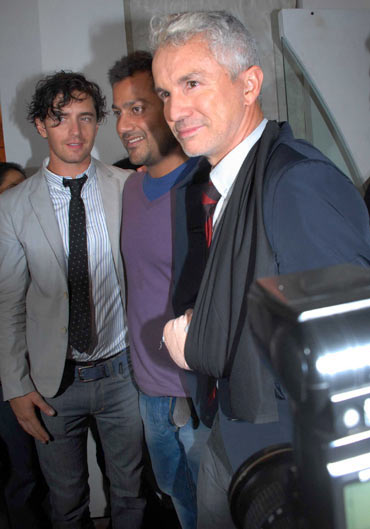 You mentioned you were looking for a suitable Indian story. What's your idea of it?

I have a suitable Indian story. It's the story of my relationship with India for the last 20 years. India is a great land of storytelling. I relate a lot to Indian actors and philosophy. My films show it. What is Bollywood -- it is Hindu mythology mixed with Hollywood. And as it happens, I love both!

What Indian actors do you hope to work with?

A whole lot of them actually. We just met Amitabh Bachchan this morning and hung out with him. He is such a down to earth person and what an incredible actor.

What draws you towards Bollywood music?

Bollywood music in essence is music of joy and life. And that is what fascinates me the most.

What do you do in between your films?

Well, I do what I am doing now. I lead a rich, fulfilling and beautiful life.

Do you watch cricket?

Unfortunately, not. Although I do enjoy the game.