Kajol's only regret in My Name is Khan 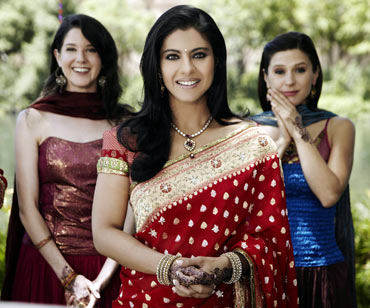 Image: A scene from My Name is Khan
Arthur J Pais in New York

In the office of 20th Century Fox in New York, I am assigned a suite to interview Kajol. The actress is in the city to promote her film, My Name is Khan, releasing this Friday. Fox is distributing the film worldwide.

I tell Kajol that I am 60 years old but that particular morning, I felt like I was 120. Why, she asks, rolling those luminous eyes. I tell her that I had interviewed her grandmother, actress Shobana Samarth, several times, and both of us were on the jury to select films for the National Awards in 1980. I was the only journalist on the panel that included such people as the novelist Sunil Gangopadhyay and the filmmaker Kantilal Rathod (Kanku).

I also tell Kajol that I have interviewed her mother Tanuja. She smiles, saying, 'You know the family...'

At the end of the interview, I ask her about her daughter. She is seven, Kajol says. I tell her may be after 12 years I would be interviewing the daughter, in case she joined the movies too. Then I will feel I am 180 years old, I say. She laughs.

Later in the interview, she says her daughter does not like to see her weep on the screen -- or for that matter in real life. 'She closes her eyes whenever I am crying in a scene, Kajol says.

Are you looking forward to My Name is Khan this Friday? Tell us!

'When you are working with a friend, say Karan, you make more sure everything is clear' 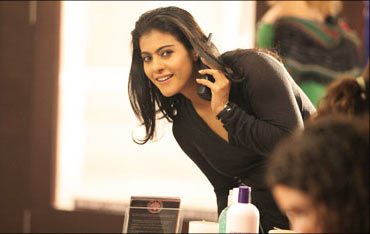 One of the earliest movies Kajol acted in was Duplicate, a comedy produced by Yash Johar and his son Karan Johar, in 1998.

It was more of a guest role but in less than a year, she was playing one of the leads in Karan Johar directed smash hit Kuch Kuch Hota Hai. Three years later, she had a major role in another Johar mega hit, Kabhi Khushi Kabhie Gaam.

And now, she is opposite Shah Rukh Khan in what Johar calls his biggest and most complex film, My Name is Khan. She plays the wife of SRK (Rizwan Khan in the film), who gets separated from him, thanks to events out of her control.

Since Karan is one of her closest friends in the film fraternity, does she say yes to him if he were to call her and then ask what the film is about?

"It is only fair that I hear from him about the story and read the script and make sure I can do justice to it," she says. "I take the decisions, whether they turn out to be right or wrong, in choosing my films. I do ask a lot of questions with every film I do, even though some of them may end up far less interesting than they had seemed about a year ago. But when you are working with a friend, say Karan, you make more sure everything is clear."

'It is okay to be imperfect as a human being' 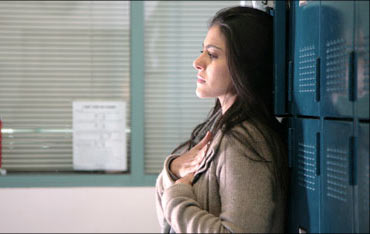 When he narrated the story of My Name is Khan, about a man with a kind of autism whose life is turned upside and marriage is threatened by the events he had no control over, she asked Johar if he really wanted to make the film.

It is an intense, life-affirming love story about one man's journey to prove his love to the world but it is certainly Johar's deepest film, she felt.

Johar's earlier films, including K3G, also dealt with life issues. "But there was more masala in them compared to this film," she adds.

She plays Mandira, Rizwan's wife in the film. "I knew I had a part that I could sink my teeth in it," she continues. It is a complex character. And she learnt a big life lesson from it: 'It is okay to be imperfect as a human being.'

In real life, too, she has learned to take imperfection in her stride. "Even if you falter as an actor, you should tell yourself it is alright to fail," she adds. "I don't wait for 10 years to find out what had gone wrong with a performance or a film. I want to find out today."

She can think of a hundred things why she loves the new movie, and how much she loved working for it. But she has one small regret, she says chuckling. "I love the songs in the film, especially Sajda (composed by Shankar-Ehsaan-Loy) but there is no lip-syncing. I love doing that. It is amazing fun, especially when the music is awesome."

'Shah Rukh does thorough research about his role' 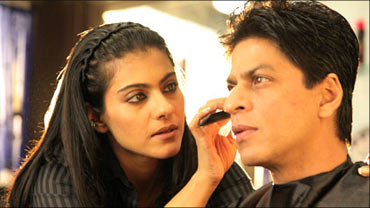 Shah Rukh Khan has said that having Kajol as a co-star has no parallels. She inspires him by the interest she takes in his work. Even when Johar has okayed a shot, she whispers into his ear that Shah Rukh could do better.

"She wishes greater success for Karan and me," Shah Rukh had said. "She is more concerned for us than for her own self. You don't find many human beings like Kajol."

She, in turn, says that working with fine artists, stars and character artists, enhances her own performance. She is always awed by the pains Shah Rukh takes to make his role realistic. He hasn't received the fullest credit he deserves for doing so, she adds.

"After I have read the script, I am wired to the film," she continues. "I imagine how someone like me would behave in a particular situation. I depend a lot on the director to put me in the right place. But Shah Rukh does thorough research about his role."

'I was stunned seeing SRK's transformation in the film' 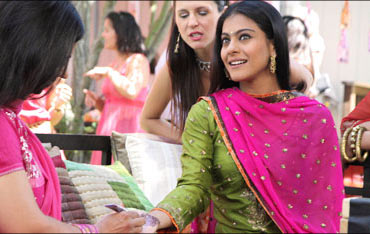 Having worked with SRK in several films, she feels he is one of the few actors in the Hindi film industry who understands well what his role is -- and what the roles of his co-artists are.

"Working with him means I am not thinking of something else, and inadvertently confuse myself. We never felt while working together that we are working on two different films. We are always on the same page in any film, especially with this one."

Kajol also says she discovered a new SRK in My Name Is Khan. "On the first day of the shoot itself, it was obvious we were seeing a totally different actor," she says. Though he is a versatile actor, some of his mannerisms stand out, she pointed out. "But in this film he had become Rizwan Khan from the very first day. I had never expected how real Shah Rukh would be in this role. I was stunned seeing the transformation. Rizwan Khan is his biggest triumph as an actor."