Rana Daggubati, a Leader with a difference 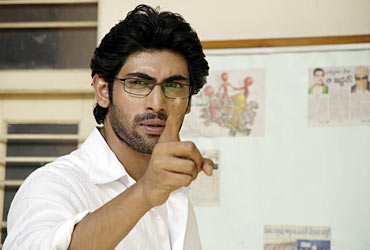 Image: A scene from Leader
Radhika Rajamani in Hyderabad

February 19 will see the dawn of a new actor in Telugu film world. The actor in question is the tall, fair, handsome and accomplished Rana Daggubati.

He is making his debut in Leader directed by Sekhar Kammula.

Even though he has an illustrious lineage -- he is the grandson of veteran producer D Rama Naidu, who entered the Guinness Book of World Records for having produced the largest number of films, the son of producer Suresh Babu and the nephew of superstar Venkatesh -- Rana was an entrepreneur first. He ran Spirit Media, a company specialising in visual effects and made it a force to be reckoned with.

Now even before the release of Leader, Rana has already bagged another project with Abhishek Bachchan and Prateik Babbar. Rana unwinds the whole journey of being an actor and working in Leader:

'I took the corporate approach to acting' 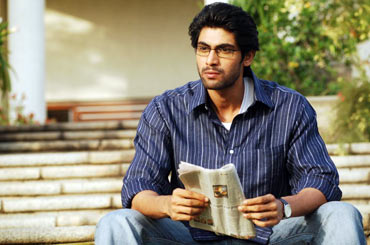 You trained yourself to be an actor; learning dance, action, voice modulation etc. Why did you feel the need to do so?

I have always been that way. Any skill requires training. I took the corporate approach to acting and wanted to develop the necessary skills. I learnt theatre under Barry John and went to the United States to undertake stunt training. I returned to Hyderabad to learn dance. It took me about two years to do all this. Then Sekhar came up with the script.

What did your family want your launch to be like?

They have a lot of knowledge about cinema. Each member of the family had an opinion on how the film should be like. Some wanted me to do an action film, while others wanted a classic love story. A political drama was not in the loop at all. But when I heard Sekhar's story, I was blown away. 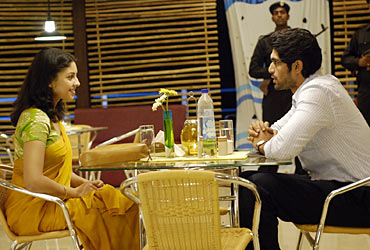 Did you, in your wildest dreams, imagine that your maiden film would be with Sekhar Kammula?

No. It's really funny. I was this tall kid who spoke Telugu and Tamil. No one except Sekhar knew how to slot me. He told me that I can do something out of the ordinary. He saw that in me.

Initially, I didn't meet Sekhar to do a film. I did a comic strip with him along with my friend when I was with Spirit. He told me that he cast me because of my managerial skills. I am happy as Leader is in the same genre as Nayakan, which is one of my favourite films.

How did the family react to the Leader offer?

They felt it was okay to do it as my second, third or even fourth film. But Venky pushed it. I would have done it anyway.

When you started the shoot, how much of your training was put to use or did you have to unlearn some things?

More than unlearn, I used the parts I needed. Doing a character study helped me understand the character of a politician. I know of politicians but don't have friends who are. I wanted to learn their body language. So I watched some of the world's famous leaders like Abraham Lincoln, John F Kennedy, Rajiv Gandhi as well as younger leaders like Sachin Pilot, Milind Deora, Stalin (Karunanidhi's son) and Jagan (the late Y S Rajasekhara Reddy's son) on Youtube.

Somebody in my unit remembered me speaking at the Spirit office during an international convention and other places. I looked at those tapes too. So it was a mixture of character study of politicians and myself that helped. Plus the voice training which I had done enhanced the acting.

What is Leader about?

Leader is a political drama. It's the story of a character who understands what the people want. 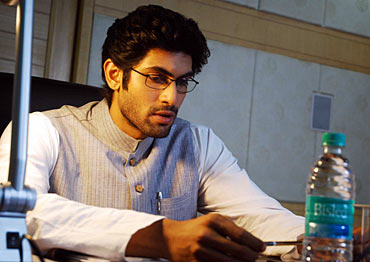 What were the challenges you faced?

Being in a serious mood day after day for 130 days was hard. The first shot was with Suhasini. The next day was with Kota, Suman (these were people whose films I had seen growing up) and then Rao Ramesh. These were veterans in the acting field. But there was a connection that became my strength; they gave me comfort. The entire unit was solidly shielding and protecting me. Everyone helped me.

I think you shot the film in real locations too. How was the experience?

We shot at many locations. I went to a lot of villages where I could see and feel things for myself first hand. We shot during the rainy season without rain when the temperature was 45 degrees. It was an eye opener for me in understanding all these problems.

People in the interior areas know much more about politicians than in the urban areas. In Peddanandipadu (a village in Prakasam district) people were discussing assembly proceedings. I went deep into the interiors. It was a good experience as I could not have learned about all of this simply by watching movies.

Is Leader entertaining? Is there a message?

Yes, it's definitely entertaining. And yes, there is a message.

Could you talk about the experience of working with Sekhar Kammula?

As a debutant, I couldn't have asked for a better director than Sekhar. I am a big fan of his writing. He's a calm, relaxed guy and a terrific human being. We both had a common corporate past (as Sekhar was in IT), so the way we think is similar.

The ad campaign has been interesting and well thought out. Was it a conscious decision?

It comes from the nature of the film. It's an interesting film with a unique story. Sekhar is also switching genres. The debutant is a star's son but doing something different. As it is a new, concept-based film we needed to phase it out.

'One doesn't get too many second chances' 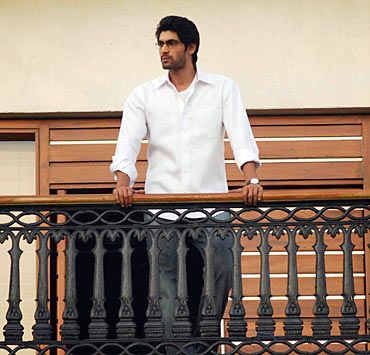 Mickey has given interesting music. Like Sekhar, he too thinks out of the box. He delivered hit music for Happy Days and Kotha Bangaru Lokam. He's young and yet produces a unique sound. He combines seriousness and fun. He used his skill and brought in the flavour of Andhra Pradesh.

There are two heroines -- Richa Gangopadhyaya and Priya Anand -- too in the film...

There's a love story too hence the two girls. Richa, a former Miss India USA, is a Bengali. She is pretty and Leader is her first film. She is a hardworking girl and has done a brilliant job. Priya is making her debut in Telugu. She kept the whole set alive. She has a natural sense of timing. It was fun when she was around. She even did the dubbing herself.

What are the kinds of films you want to do?

I want to do films in as many genres -- action, fantasy, period, classic love stories -- as I can. I don't want to pigeon-hole myself.

Expectations are high. Are you nervous?

I didn't gauge the size till the audio function. So many people came to that function. Most of them were happy that I have chosen a unique path. The Censor Board people too had positive things to say about me. The first weekend will matter. It will all hit me the day the film releases.

How is it carrying on the baggage of being Rama Naidu's grandson and Venky's nephew?

It's a huge responsibility. I wouldn't have been here without them. I need to work harder. We can't make mistakes. One doesn't get too many second chances.