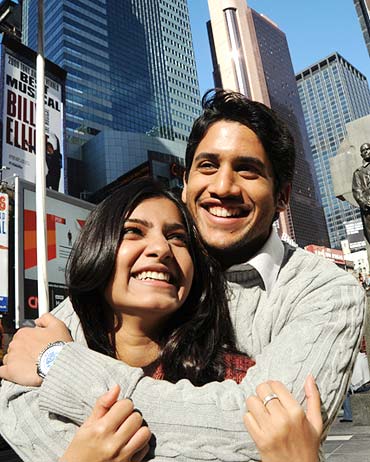 Naga Chaitanya boasts of an impressive pedigree. After all his grandfather is thespian Akkineni Nageswara Rao while his father is superstar Nagarjuna. Naturally expectations were high when the young actor entered Telugu films.

However, his first movie Josh released last September didn't do well as expected. But that didn't faze Chaitanya, who is now ready with his second film Ye Maya Chesaave -- a bilingual (the Tamil version is titled Vinnaithandi Varuvaya and stars Silambarasan and Trisha) -- directed by none other than Gautham Vasudev Menon.

In a sense Ye Maya Chesaave will be a 'litmus test' for this young lad who has embarked on a career in films. The boyish looking, warm and affable actor talks about Ye Maya Chesaave and also what went wrong with Josh.  Excerpts:

What made you say yes to Ye Maya Chesave? Is it because of Gautham Vasudev Menon?

I am his biggest fan and love his films. I listened to the script and loved it. My dad and I wanted some changes and the director agreed to them. After Josh, I was looking for a love story and this was it.

There are innumerable love stories being made. How different is this one?

If you see the trailer, it says another love story yet again. If you are looking for a movie with a twist, it's not. It's a normal love story. It's the feel, the chemistry and the natural way of creating love which the director has created. It's all about deep emotions. You can walk out of the theatre with a nice feel. The way the director has dealt with the film is real.

'The characterisation of Karthik is simple' 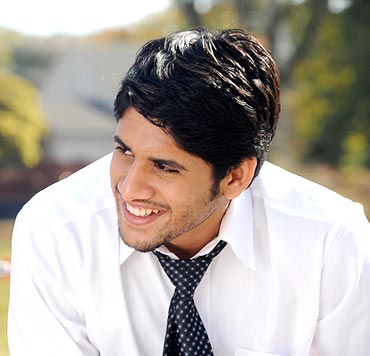 What's the film about?

The basic line is the story of Karthik -- a struggling assistant director who wants to get into films while his parents want him to become an engineer. At this stage, Jessie comes into Karthik's life. She is a Malayalee Christian and two years older to him. How the love connects both and takes Karthik forward in the profession also forms the story.

How did you prepare for Karthik's role?

The characterisation of Karthik is simple. I've been seeing a lot of films and learning a lot. I have been observing assistant directors, their mannerisms, body language etc. This helped. Also the director enacts the scenes. He gives you immense freedom but doesn't believe in rehearsals and finishes the shot within the first four takes. He prefers the first take as he feels there is a lot of spontaneity in it.

So was it a dream come true working with Gautham Menon? Was the experience enriching?

Of course. I never dreamt that I would get to work with him. I didn't know whether I could live up to the expectations. I was pretty nervous on the first day. But hats off to Gautham sir. He's awesome to work with and made me feel comfortable.

'Rahman is the hero of the film' 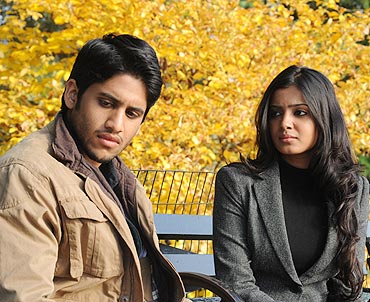 There's a new heroine Samantha in this film. How was it working with her?

There aren't many characters in this love story. It's mainly the two of us and there are a lot of conversations. It did help to get immense support from her to get the chemistry going. We worked well together and I hope it shows. Samantha has done three Tamil films but none have released yet so this is her first Telugu film as well as her maiden film.

A R Rahman composing music for this film must have been a huge plus...

Yes. Even Gautham sir says Rahman is the hero of the film. The audio is getting a huge response. The visuals and music gives the film a poetical feel. There's a lot of music in the film.

'The Tamil and Telugu versions have different endings' 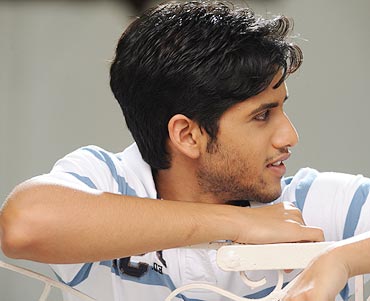 You mentioned some changes were made in the Telugu version (Ye Maya Chesaave). So are the two films different? Were they shot back to back?

When I started to shoot the Telugu film, 60 per cent of the Tamil film was over. The climax was shot together in New York. Both the films have different endings. The Telugu one has an ending tailor-made to suit the Telugu audience while the Tamil film has a different approach -- a more realistic ending.

It was shot in Hyderabad, New York, Alleppey (Alappuzha in Kerala since the heroine is from there in the film) and a bit was filmed in Goa too.

Do you have a word about the production house?

I would like to thank them for coming to me with this film even before Josh released. They brought great production values and good technicians due to which the film is technically brilliant.

'If Josh was my fourth or fifth film, it would have done better' 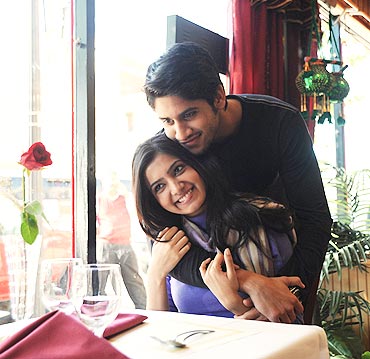 Puri Jagannath is supposed to be essaying the role of the director in the film...

That's as real as it gets. He's supposed to be the ace director and I am assisting him. He said acting is a whole new experience. I think he had a good time. As for me, it was weird as I have known him for a long time behind the camera. Acting with him took some time. He was chosen as it was necessary to have a known face.

Were you disappointed that your debut film Josh didn't do as well as expected despite everyone praising your performance?

The disappointment was there as I thought at least it would reach everyone. Somewhere, the judgement went wrong. I'm learning about the audience.

Was it because the expectations were too high?

Expectations were high because people went with a particular mindset of how the film would be like. There's nothing wrong in that. If Josh was my fourth or fifth film, it would have done better. I can't blame the expectations because they got me the openings. People were curious, so they went to see the film.

How is it carrying the baggage of being Nagarjuna's son and Akkineni Nageswara Rao's grandson?

Well, it has its pluses and minuses. I want to take advantage of the pluses. People expect more. To start off, you are ahead of others. So instead of complaining about minuses I feel I must go on.

What are the kinds of films you want to do? Would you do a role with grey shades?

I want to try everything except horror. Variety will keep me going. I will do grey shade roles and multi-starrers because that's the only way cinema will grow.

'I would love to do a Tamil film' 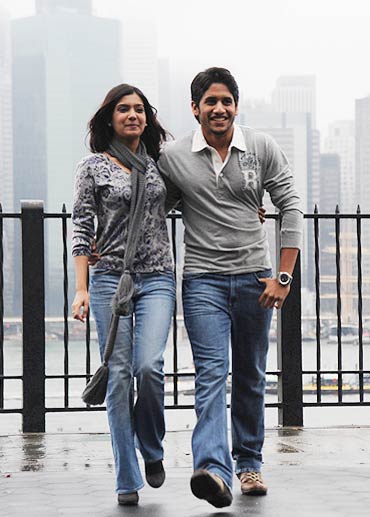 You trained yourself to be an actor. When did you really think of getting into acting?

I lived in Chennai for 18 years so I wasn't familiar with Hyderabad till I came to do my B.Com there. I took a liking to cinema and expressed my desire to act to my dad when I was in the second year. He wanted me to be sure. I took a three-month course in acting in Mumbai and started liking it. Later I studied acting in Los Angeles, learnt martial arts and focussed on Telugu (the diction part) for about a year and a half.

Have you signed any new projects?

I have signed a film to be produced by Siva Prasad Reddy of Kamakshi Kala Movies.

Are you open to doing films in other languages?

Yes, I would love to do a Tamil film. I have grown up in Chennai so my Tamil is as good as Telugu.

Will we see a film with you, your grandfather and your father?

If there's a script, why not?

How are you going to cope with success and failure which are part and parcel of the film industry?