Tamil director Selvaraghavan on his latest 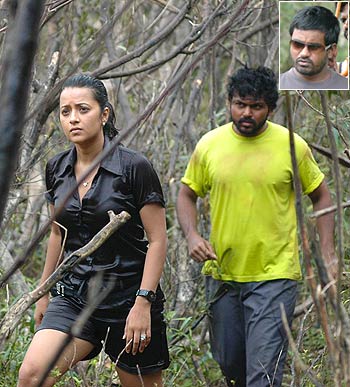 Selvaraghavan is hailed as one of the brightest filmmakers in Tamil. His first film Kadhal Kondein starring his younger brother Dhanush and made in a realistic dark format unlike the usual Tamil films, was a breath of fresh air.

His second film 7G Rainbow Colony was another different and refreshing movie.

But his third film Pudupettai was a disappointment. That was in 2006.

Since then Selva took a break before working on his magnum opus Aayirathil Oruvan (One in a Thousand) which took two years to make.

After many delays, the film is finally releasing on January 14 to coincide with Pongal.

What was more difficult for you: making Aayirathil Oruvan or the long wait?

It was like moving from one nightmare to another! There was not much difference between how I felt both the times. Waiting for people's reaction now is another nightmare!

Why did you decide to take up such a difficult project?

I felt stagnant making the same kind of films. I felt I was not going anywhere. Yes, you either make the same kind of films again and again and feel safe, or do something more challenging. It did not excite me to repeat myself. The very reason why I didn't pursue a career as a mechanical engineer was because I don't like monotony -- I can't have the same routine everyday. So, I felt I needed change and challenges as a filmmaker.

From where did the idea to make such a film originate?

Most of what I have written is from my imagination. I feel a film in this genre has not been done in Tamil till now. It is quite new to the audience. That is why I decided to make a film like this one.

'This time I have relied on my imagination alone' 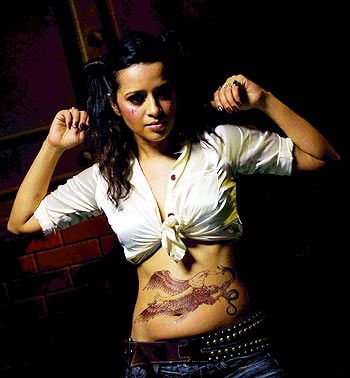 Did it take long for you to bring your thoughts in the form of a screenplay or visual images?

Normally, I take one week to ten days to finish a screenplay but this time, it took me 3-4 months. On some days, I could not really write as what I was writing was not real.

I remember you telling me when we first met that you pick characters from around you...

Yes, till now, I have made realistic films based on what was happening around me. But this time I have relied on my imagination alone. Nobody will see this kind of characters in real life. It was interesting to be in their shoes and write the screenplay.

Was the entire story from your imagination, or did you do any research?

We did a lot of research on the period, characters and their costumes. I met some archaeologists to understand how they work. With my limited experience of history, I had to really work hard on research. Only after I did all the research did I give them life. In my story, they belong to the 12th century.

Are you going back in time in the film through the archaeologist's work?

No, I am not doing time travelling. People think that is the only way you can go back in time. That is the secret of the movie. You don't have to go back that way. Everybody meets everybody in my movie. It is about how destinies clash and how destiny intervenes in each person's lives.

'It is impossible to make a movie like Aayirathil Oruvan' 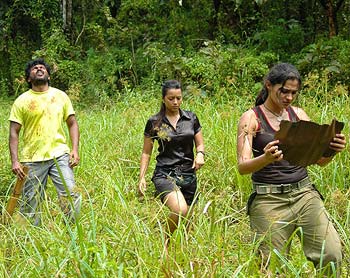 Do you believe in destiny?

I don't believe in destiny but my characters do.

How did you, a person who does not believe in destiny create characters who believe in it strongly?

I don't know. It was difficult. I used circumstances to force destiny on my characters. More than destiny, circumstances play a part in the story.

Was making the film, tough?

It is impossible to make a movie like this. As a filmmaker, I know what is possible and what is not. Even If you give me the same budget again, I will not be able to make the film again. More than the budget, it is difficult to shoot a movie with so many people in Blue Mat and your judgement has to be 100 per cent perfect.

Shooting with 3000 people on a day is very taxing. Nobody listens to you. Also, you don't have 3000 people in the union that supplies junior artists. So, we have to rely on other unions which meant that our group of people spoke in all the Indian languages. So you can imagine how tough it was to communicate to all of them! It was a real nightmare to make costumes for all these people and then make them do the same thing.

How did you survive all this?

It is a miracle, I would say. I don't know whether I am mad or not now [laughs]. Perhaps you can make out.

I feel you have become pleasant after the experience...

I think I have learnt patience! It was like, you have a thousand people ready and then the rain comes, and what else can you do but wait for it to stop. You learn patience!

'It rained wherever we went' 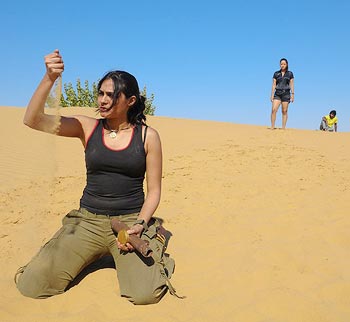 Which was tougher: tackling the weather or managing people?

Mother Nature was never kind to us! It rained wherever we went. After a while, people started telling us to go to places which have not received rain for a long time! Even in Jaisalmer, it rained after many years when we went there to shoot. It rained in Hyderabad when we went there, that too when it was not the season for rains.

Jokes apart, it is more difficult to handle people. The problem was, only I was aware of what would happen next. These people didn't understand what I was saying. If people are trained or rehearsed to do such scenes, it would have been fine. Here, we don't do any such thing. After a point, I lost my mind! Sometimes, we shot a sequence for more than two days! But I didn't give up.

Did the thought come to you?

Yes. I generally don't give up but this time, I felt like it, many times. Maybe I made this movie too early in my career. I should have had more experience. We were moving from place to place, and it took a toll on our health too.

You spoke about shooting in forests and also deserts. Does the story take place in such contrasting backgrounds?

The story takes place at many places. Forests and deserts are just part of a journey. The film was about the journey of three people (Andrea, an archaeologist, Karthi, a coolie and Reema Sen, an office goer) to many places. They keep travelling.

How long did it take you to finish shooting?

We finished shooting in one year and three months. Post production took another year.

Was it the toughest film made by you so far?

It is the toughest film I have ever made [laughs].

'I am extremely possessive of my characters' 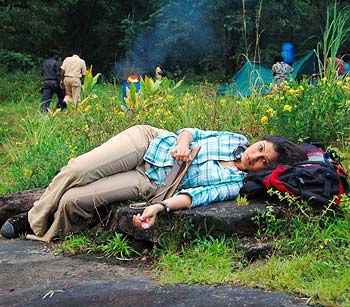 Who has the tougher role to play: the artists or the technicians?

It was tougher for the artists. While they have to jump into wild rivers, we just watch. When we shot at Jaisalmer, it was sub zero conditions but they couldn't wear any warm clothes while we were all wrapped up. Physically, it was tougher for them.

Are you satisfied with your artists?

I feel for the first time, the right casting happened. I am surprised at my own judgement. Normally we make mistakes here and there but in this film, it was right. We had great time shooting the film for more than two years. We were like a family. I am going to miss all my lead artists.

Are you attached to the characters you have created?

I am quite attached to them. They haven't left me yet. I am extremely possessive of them that I may even create a cartoon series on them! They are very powerful and unique. I don't want to lose them though I have set them free in my film.

So finally the nightmare is going to end with the film releasing on January 14. What is in your mind right now?

Are you nervous about how the audience will welcome your film?

I am petrified. I have never been so scared in my life. So many people worked so hard for more than two years because they had complete trust in me. So, I am really scared.

Whatever the result, you have to accept it. We make films for people with the hope that they will enjoy them. If they don't like it, it will be my fault. I can't blame anybody else. All were under my command.

At any point, did you think you should have made a simpler film?

At least 45 times. I should have made a simple love story.

What will you do on the day of the release?

I think I will cover myself completely with a blanket and hide in my cupboard! [Laughs]