'Arshad, Vidya were edgy about kiss in Ishqiya' 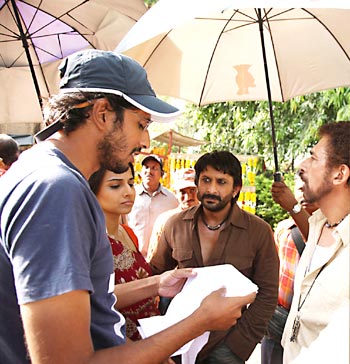 The trailer of Vishal Bhardwaj's production Ishqiya is far-removed from the regular Bollywood movie trailers. This one -- starring Naseeruddin Shah, Arshad Warsi and Vidya Balan -- has a beautiful mix of seduction and violence. The film, which tells the tale of two robbers, has quite a bit of abusive language as well, and has been given an 'A' certificate.

Director Abhishek Chaubey has been a part of many Bhardwaj movies, and seems to have developed a rustic filmi touch like his mentor.

He talks to Patcy N about his journey from Bhardwaj's homestate Uttar Pradesh to Bollywood.

Vidya plays a seductress in the film, something she has never portrayed before.

I wanted a typical Indian looking village girl. That's why I chose her. Vidya took up this role right away because she understood the character. So being a seductress and saying that kind of (abusive) dialogue were smaller issues. More than convincing her to do this film, she was nervous as to how I would do the film. We discussed and rehearsed every scene.

In fact, Arshad was more nervous about the kissing scene than Vidya. We would meet almost everyday before the shoot. We had a workshop too. We talked about all the apprehensions and clarified them.

Arshad and Naseerbhai are natural actors but Vidya had to really work hard and be the person that she was playing. Even Saif (Ali Khan) had to put in lot of work for Omkara.

What does Ishqiya mean?

Ishqiya mean romanticism. But here it does not only mean romance. It is about people with romantic natures. Ishqiya is about passion, which is the core of the story. At the same time, it is also a crime story so it works as a thriller as well. It is not a triangular love story, though. We shot the film in the village of Mallbe in Satara for about 50 days

Become a fan of Ishqiya here! 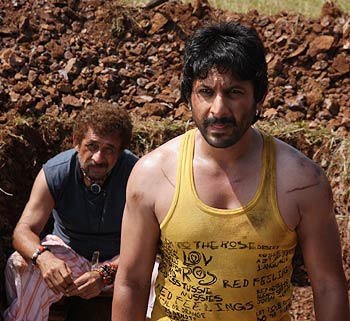 How did you meet Vishal Bhardwaj? How did Ishqiya happen?

After working as an assistant director on a film called Shararat (starring Abhishek Bachchan), I wanted to stay away from films for a while as the whole experience left me exhausted.

In the meantime, I did a documentary. That was when I got a call from Vishal Bhardwaj's office. They were looking an assistant director for Makdee. Since it was a short film, I decided to give it a shot. Vishal and I hit it off. It was while working with him that I realised what I wanted to do with my life. I realised how important writing is; the need for a good script.

While assisting Vishal in Maqbool, I started writing my short film. Vishal gave me several opportunities to express myself as he knew I wanted to be a director. He would ask me how I would tackle certain scenes in his film. I showed him my script and he liked it. So he asked me to write the screenplay of Blue Umbrella, which was based on Ruskin Bond's story. I was an assistant director on Blue Umbrella so it gave me overall perspective on how to handle a film.

All this made me want to direct a film. I told Vishal about that, and he was very supportive. He even started working on the script. Meanwhile, Vishal started with Omkara for which I wrote the screenplay. I was the associate director of the film too.

Soon after Omkara, I shared the idea of Ishqiya with Vishal. He liked it and asked me to write the screenplay. It was very clear from the beginning that Vishal would produce my first film. His only condition was that he wanted to write it with me. So when we were writing Ishqiya, we were also working on Julia which Vishal was going to direct. My first draft of Ishqiya was done by mid-2007. The other drafts took time.

'Saif's turnaround as Langda Tyagi is not something that happens everyday' 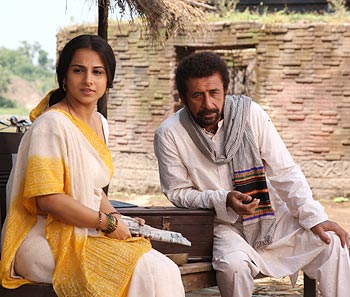 I did not want to take any chances with my first film so I decided on going for actors who I had complete faith in. And they had to look believable. Saif's turnaround as Langda Tyagi (in Omkara) is not something that happens everyday. Not all actors can pull off everything. So I was left with very little choice. We considered a lot of names before finalising on the three.

I have worked with Naseerbhai in Omkara and Maqbool so I have a personal rapport with him. He liked the script when I narrated it to him. His only apprehension was that I wanted him to play a slightly younger man.

I was convinced about Vidya the moment I met her. Till that time, I wasn't sure. But after narration we were both convinced that this could be done.

Arshad was cast last. I wanted a young person to play his role but we were not getting the right person. So Vishal suggested Arshad. I like Arshad's acting; he is an underrated actor.

What I liked about the cast was they were not only excited but they also understood what they were doing, the mood of the film and their role in it.

'We thought of rehearsing the kiss in a hotel room' 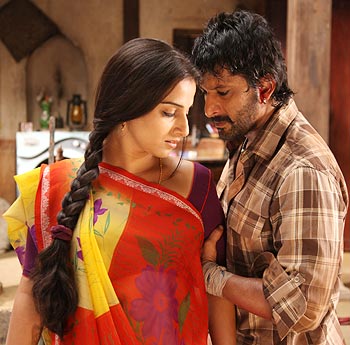 Any interesting anecdotes while filming?

Arshad and Vidya were very edgy about the kissing scenes, which I was trying to underplay.

Arshad called me one day and asked me how we are going to shoot the scene. I told him that I would leave the camera on and walk away while they finished the scene. Arshad became very nervous and called Vidya. He told her about the scene. She freaked out as well and called me. She was very skeptical, so we thought of rehearsing the scene in a hotel room.

But when we met, we did not talk about the scene at all. As a result, I became nervous and edgy. Anyway, when the D-Day came, I kept the camera rolling and went for a walk while they finished the scene. 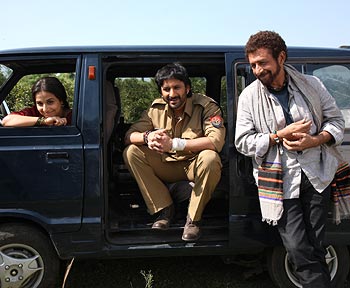 How was it working with Vishal Bhardwaj?

Vishal listens to people first and then forms his opinions later. He gave me an opportunity to experiment with my ideas. He also put me under pressure by giving me responsibilities, which was a very good learning experience. I never went to a film school, so I learnt everything from him.

Since my dad worked in a bank, we travelled a lot. I have lived all over India -- from Hyderabad to Jharkhand. I did my graduation in English Literature from Hindu College, Delhi. Even as a child I was interested in movies; the work that went on behind the camera. Strangely, I was never really interested in acting. I told my family about my dream of becoming a filmmaker when I was 14.

When I went for Delhi, my taste in movies became more refined and I thought of going to Mumbai and joining Xaviers Institute of Communication. I did a one year basic course in Film and Television Production. My course co-coordinator from Xaviers, Urmi Juvekar (writer of Oye Lucky! Lucky Oye and Rules: Pyaar Ka Superhit Formula) helped me in getting my first job as production assistant in a television production house Magic Box. After that I worked as an assistant director on Shararat.