Some of the best filmi hairstyles, right here! 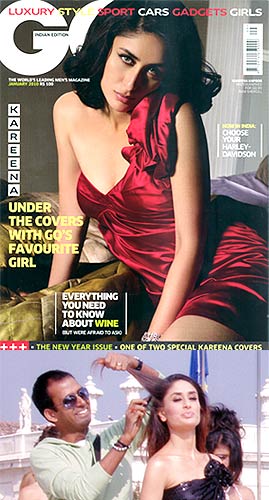 So how did Kareena Kapoor get this gorgeous look in GQ magazine? It's all thanks to 35-year-old hairstylist Purshottam Hans or Pompy, who has been styling Bollywood heroines for the past seven years.

He reveals some of Bollywood's hair secrets to Patcy N.

I have known Kareena from Kambakkht Ishq days, and have been working with her since.

I styled her hair like this for the GQ magazine photoshoot. They wanted a Hollywood look of the 1960s, so I gave her short bob cut. I did not cut her hair. But I used a hair piece that looked exactly like her hair, and then I cut and styled it the way I wanted. The front part of the hair is Kareena's natural hair, while the back part is the wig.

I love working with Kareena. She has a lot of class and is a fun girl. She looks royal. She never stops me from using pins and hair sprays, and gives me full freedom to do whatever I want with her hair. There are some actresses, who don't let me use sprays and pins as much as I'd like. 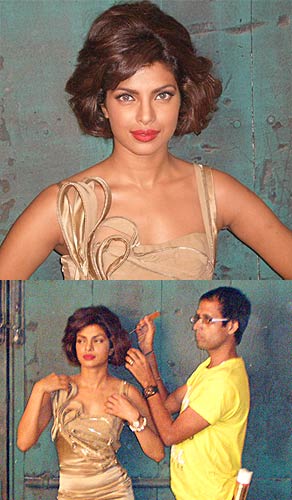 I styled Priyanka's hair for Fashion, and have done many films and magazine covers with her since then.

Her hair is very thick and manageable. The style tends to stay on her head; I don't have to keep setting it or touching it up. She is very experimental with her hair and lets me try out new hairstyles. In fact, she gets different hair colours for me to try out.

I did not use hair extensions for Priyanka in this picture. I rolled her hair in such a way that it stayed there. Since she likes to puff up her hair in front, I tried a new style. This is a fusion of the 1960s style with the modern look.

Both Priyanka and Kareena wanted me to do their hairstyles for the films they were working in. Kareena was in Australia shooting for the Stepmom remake while Priyanka was shooting in Bangkok. I stayed with Kareena because she had asked me first. 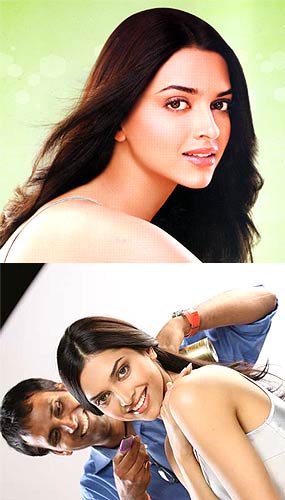 I know Deepika from her modelling days. I was new at the time too.

I had styled her hair very well for this ad but then I was told that it was a soap ad, so the hair should not be highlighted. So I had to change her hairstyle and make it simple. But I thought that was a compliment. 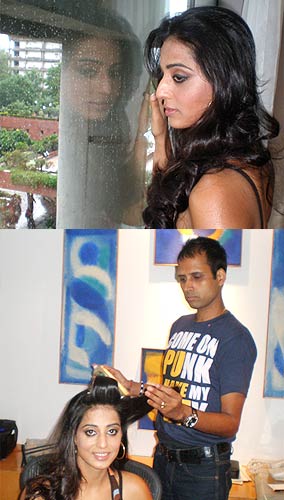 Dev D was my first independent film. I styled Kalki's hair in it. (Director) Anurag Kashyap asked me not to style Mahi's hair in the film, as she plays a village girl. She was not allowed to wear any make up in the film, not even lip balm. She would just change her clothes and be ready for the shoot.

I styled Mahi for the film's premiere. We are both Punjabis, so we always speak in Punjabi when we work together.

She is a very beautiful girl with long and healthy hair. She likes to leave her hair down, and that suits her too. 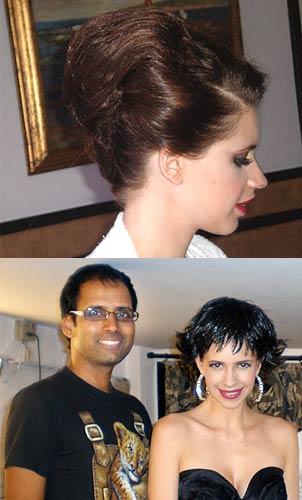 Kalki is half-French and half-Italian, and has long and golden hair. We darkened her hair in Dev D, so that she does not look like a foreigner.

She is very sweet, and never argues about anything.

I styled this look for The Man magazine. I was asked to give her three-four looks, and was given a free hand. One of her looks was the outturn bob cut. Since she looks like a foreigner, this hairstyle looks good on her.

Kalki and I went shopping for his hairpiece, and Kalki really liked it. 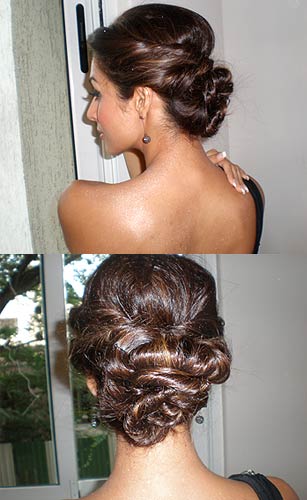 I have known Malaika since 2003. She likes my work a lot. Her hair is long and wavy. She loves using colour - her hair is now golden and brown.

I styled her hair like this for an ad, for a builder in Pune. Since the ad had her attending an evening party, she was wearing a gown. I created a Western-looking bun for her hair.

Malaika is never tensed, and she does not have an attitude. 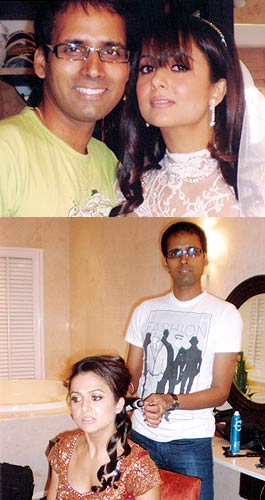 I was assisting Cory Walia, who styled for this film. Thanks to Girlfriend, I went abroad for the first time. We shot for the film in Mauritius.

After Girlfriend, I met Amrita again on the sets of Kambhakkt Ishq. I was styling Kareena's hair in that film but Amrita's hairstylist hadn't come one day, so I did her hair as well.

Make-up artist Mallika Bhatt and I did her styling for her wedding as well. I gave her spiral curls and a fringe for the Christian wedding. For the Hindu wedding, I gave her a traditional bun. For the reception, I gave her curls. 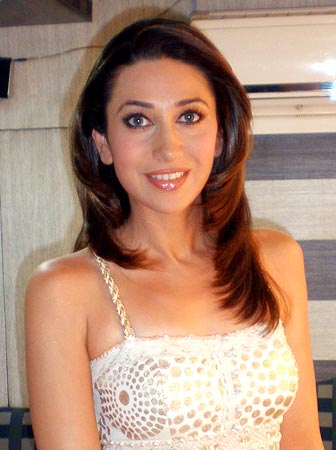 Kareena recommended me to Karisma after Kambhakkt Ishq. I was still in school when Karisma was a star, so I was very nervous and excited while styling for her.

I did her hairstyle for both Nach Baliye and Hass Baliye. She was very happy with her hairstyle, and told me that I understood her hair very well.

Since this shoot was in summer, I gave her a summer look. I kept her hair down, not up in a bun.

People think that Karisma's natural hair is curly and now she has straightened it. But that's not true. Her hair is straight naturally. Earlier, she would use rollers to curl her hair because that was trendy at the time. Sridevi, Madhuri, Rekha, Raveena all of them had curly hairstyles.

Karisma's hair is the most beautiful hair I have worked on. 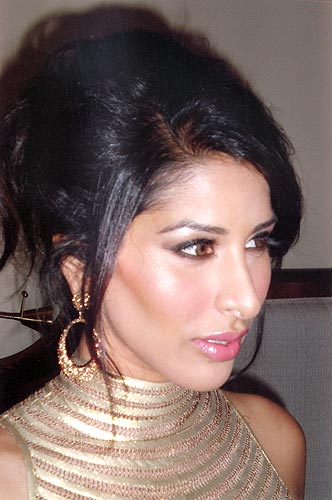 I met Sophie four years ago when she was a veejay with MTV. Later, I styled her hair for Sanjay Gupta's Alibaug.

Her hair is very long and silky but I insisted on cutting it short up to her shoulders. That suits her more. She was hesitant at first, but later, she agreed.

This bun was done when her hair was long. It was for an event in the evening, so I piled up her hair in a messy way on her head. 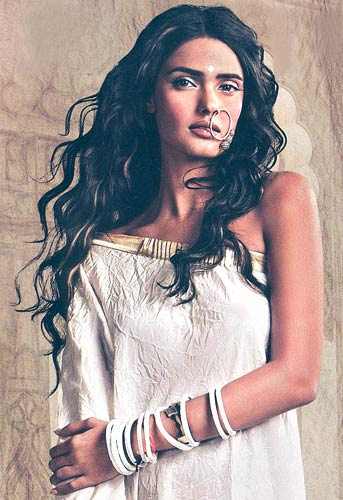 She starred in Arjun Rampal's production, I See You. She is also a model. I did this hairstyle for her at a Lakme shoot.

She is wearing hair extensions. She has thin, short and silky hair. By adding colour, we created a fusion of old and new. 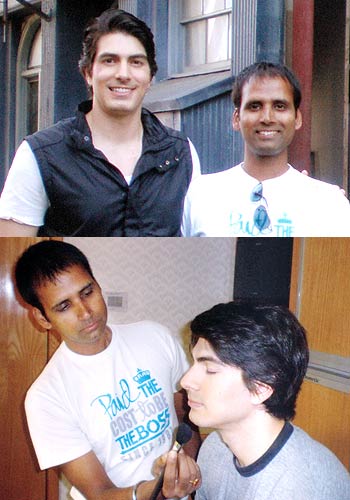 I was asked to style his hair when I was working in Kambakkth Ishq. Before this, I had styled for actors like Rahul Bose, Bobby Deol and Fardeen Khan.

When I went on the sets and asked who it was, they said it was Brandon. I was bowled over.

Brandon Routh was very cool and confident. Once the make up and hair was done, he did not require any touch-up or even ask for the mirror between shots. He was very polite.