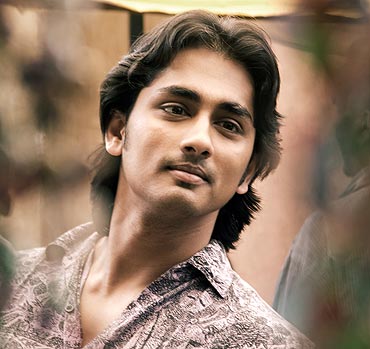 We loved Siddharth in 2006's Rang De Basanti. But that was the last we saw of the actor in Hindi cinema. Siddharth, who was busy with his Tamil and Telugu movies, makes a comeback to Bollywood with Striker, a gritty tale about a carom player.

Siddharth tells Patcy N that he doesn't feel bad about being left out of 3 Idiots, starring the RDB cast Aamir Khan, Sharman Joshi and R Madhavan, and why he's looking forward to Striker.

After getting an MBA degree, you decided to get into the movies, and assisted Mani Ratnam. Then you turned actor with Shankar's Boys, and did quite a few Tamil and Telugu movies. Why did you jump into so many streams all at once?

I'm very restless -- as a person, as well as creatively. I was jumping around so much because I was looking for good work. In fact, after Rang De Basanti, people were shocked that an actor, who had got a big Bollywood break, did not go all out and push for a Bollywood career.

There were two reasons for that -- I was looking for a good script, as I wanted to do a perfect film and not be a flash in the pan. Secondly, I wanted to concentrate on my Telugu career, which had just taken off in a big way.

In the south, I can commission my own films, as I am involved from the start to the end of the film. But in Mumbai, it took me time to get a film where I could be involved from start to finish.

How many Hindi film offers did you get after RDB?

Many. Producers even told me that I was mad not to take up any. But I did not get any film that excited me as RDB did.

Did you ask Aamir for any sort of help in Bollywood?

Why should I ask him? I have got to this place where I am on my own. With all due respect, I have a box office of over Rs 150 crores in Telugu films without anyone's help. I don't need anyone's help to be a star. I am doing everything my way.

Do you regret missing out any opportunities in Bollywood?

Absolutely not. I had four superhits in Hyderabad in the four years that I wasn't here. There is no film that I think I should be part of, except Striker.

'Striker is my best work' 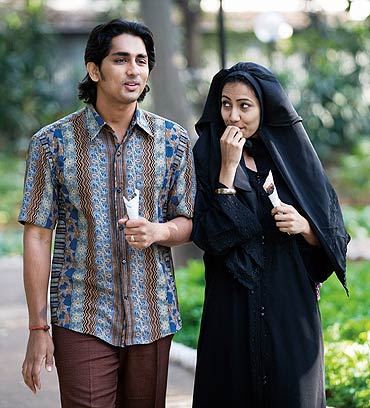 What element of Striker attracted you to it and make a comeback after four years?

Initially, Chandan (Arora, director) and I were going to a romantic film. But then he did some research on how carom was played in Malvani (near the western suburb of Malad in Mumbai) in the 1980s -- how hustling, betting and moneymaking was involved. It was so fascinating that we decided to make a film on it.

My role in Striker is the most challenging role I've ever played. I've never got such an author-backed role before. I wondered whether I would be able to pull it off, and that scared me as an actor. If I was looking for the right solo hero film after RDB, Striker was the right choice. I think it's my best work.

Tell us about the film.

I play a guy called Suryakant Sarang, who is born in the slums of Mumbai. He wants to make money and be successful, wants to get married and go to Dubai. But he ready to wait his turn.

He knows how to play carom from a young age. The film is about what happens to him when carom comes back to his life. The story progresses from age 10 to age 30.

'Striker was a very difficult film to shoot' 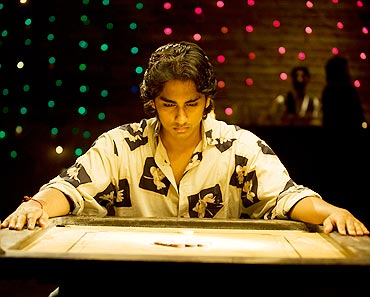 Did you have to take carom lessons for the film?

I am a decent player. But Chandan said that he would not use any trick photography and that I would have to hone my skills. So I had to train extensively for two months. At the end of it, I could shoot a scene where I pocketed three coins on one stroke.

I met about 250 carom players and learnt how to behave like a champion. Unlike other sports, you can't show off your muscles. Carom is a sit-down game between two people in a dingy room, so I needed to understand the psychological warfare.

Since this film is based in 1980's Malvani, I stayed there for two months and observed people. I spoke to the them about their lives too, and that helped me play my character.

Is the film based on a true life incident?

We interviewed many people for Striker, and we found a person called Suryakant Gadalu. Striker is not his story nor is it based on him but there are many scenes inspired from his life.

How was it shooting in the slums of Mumbai?

I love shooting in live locations because then, it is easier to get into the skin of your character. Striker was a very difficult film to shoot, as it belonged to the 1980s' Mumbai. So my clothes and hairstyle had to be of that time. I give full credit to Chandan Arora and the Director of Photography PH Vinod for giving the film an authentic look.

'Bombay Bombay is not like the songs I have sung earlier' 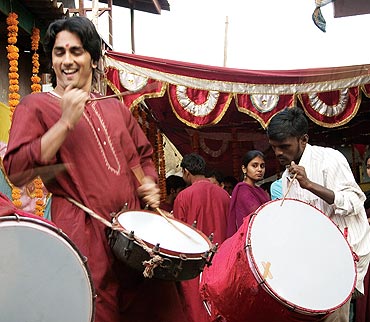 What made you work with Chandan Arora? His earlier film, Main Madhuri Dixit Banna Chahti Hoon had not done well.

I call Chandan my soul mate. We have a great understanding of cinema. It's not possible to make a film like Striker if Chandan and I didn't get along. I see myself making many films with him.

I don't think Main Madhuri... did not do well. People loved it and it got good reviews. But it was poorly marketed, so most people saw it on television.

If you look at my career, I have launched five directors and all of them have become very successful. I can spot talent in Chandan. I met him right after RDB with a different script.

You have sung in this film.

I conceived the idea of an ensemble soundtrack, so various composers have scored for this film. I produced the album, and have sung two songs, Bombay Bombay and Haq Se.

I have sung six songs in Telugu, and they were quite popular. So singing was not difficult. But Bombay Bombay is not like the songs I have sung earlier. I haven't sung like a singer but have sung like a character -- the vocals are more raw and edgy. Amit Trivedi and Yuvan Shankar Raja composed the track.

'You get an RDB only once in your life' 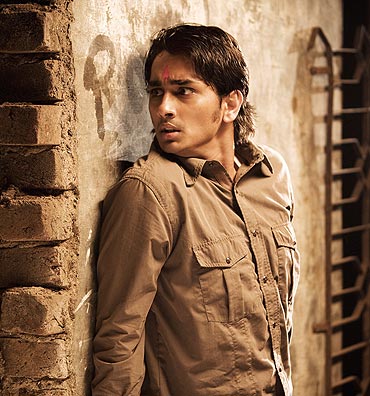 You had written the script of Telugu film Chukkallo Chandrudu. Can we expect more scripts from you?

I have not lost touch with writing. I came into the business wanting to be a writer-director but now, am only concentrating on my acting. I'm working on some scripts but nothing in the near future.

Do you plan to do more Hindi films?

I have made a dedicated promise to my fans and audiences that I will not disappear. You get an RDB only once in your life, and only one chance to prove yourself in your second film. So I have been very careful. I am here to stay and will concentrate on my Bollywood career.

Did you feel bad that you were not part of 3 Idiots, starring your RDB co-stars Aamir, Sharman and Madhavan?

I left them out of Striker, so I don't think I should feel bad about 3 Idiots.

I am shooting a fantasy adventure Telugu film, directed by Prakash Rao and starring Shruti Hassan. I will announce my Hindi films after a couple of weeks.