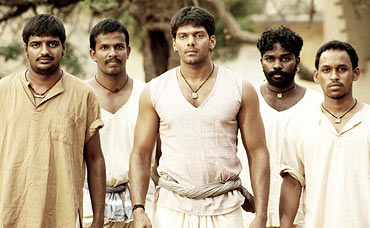 Image: A scene from Madhrasapattinam
Shobha Warrier in Chennai

Director Vijay, an assistant to filmmaker Priyadarshan, made his directorial debut with Kireedam, a remake of the Malayalam classic of the same name. His second film was the remake of Khosla ka Ghosla as Poi Solla Porom. Both worked well at the box office. With Madharasapattinam, one of the most eagerly awaited films of the year, he moves away from remakes.

Vijay speaks to Shobha Warrier about the film that is releasing on July 9.

Your first two films were remakes.

I don't think you can call Kireedam a remake. I wrote 80 per cent of the script. I only took the idea from the original. Even the characters were different. Then, Priyadarshan wanted me to make Poi Solla Porom. All stories have some inspiration. It can be an incident, a person, a book or anything.

How did the idea of Madharasapattinam come to you?

I always wanted to make a different film. The idea behind Madharasapattinam was with me since my college days. I had an English professor who used to talk to us about the freedom movement a lot. It was he who got me interested in history.

I used to visualize about the people who lived in the pre-independence period. I started thinking about how it would have been if an English girl fell in love with an Indian boy. That was how the story idea came to me. At that time, the place was not Madras. It was only after I started writing the script that I placed the story in pre-independence Madras. 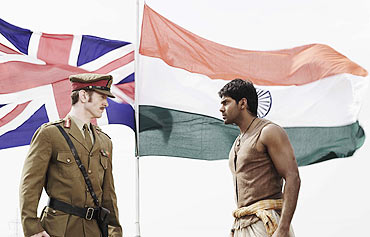 Image: A scene from Madharasapattinam

When did you write the script?

After I made Poi Solla Porom. It took me six months to write. I knew I would not be competent enough to make this film before I made a few films. I was going to talk about a period which many people living in India remember, so I knew I had to be very careful about authenticity.

The period I planned to depict was between 1945 to 1947. So, I made sure that whatever I talked about was right. I showed the script to Sahitya Academy winner Tamil writer Prabanjan Sir.

What research did you do?

A lot of people who witnessed the independence period are still alive. I visited them. Once I started the research, I found that I was going deep down in an ocean. After a while, I decided to come back to my script.

Why did you make your protagonist a dhobi and a wrestler?

When the British came to India, they depended heavily on cooks and dhobis wherever they were. In Chennai, the dhobis lived around the area where the British lived; it was called Washermanpet. That was how the idea came to me. 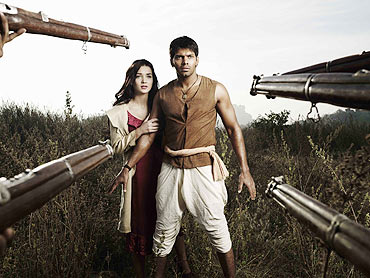 How did you develop the love story?

It is the story of the daughter of a governor general falling in love with a dhobi. She is educated; he is illiterate. She knows only English and he doesn't know English. They cannot communicate with the help of a language. I enjoyed writing the script.

Does that mean it's just a physical attraction for the girl?

No. I have given enough justification to show that their love is not physical. They cannot communicate through language, but still love each other. That's the purity of their love.

What characteristic of the man attracted her?

He is innocent. He believes completely in his culture, people and county. Like cricket and football, wrestling is an important sport for him. She comes to watch him wrestle. I have to show their love convincingly. If you don't show the love between an English woman and an Indian man convincingly, it will not work on screen.

Was it tough to write the script?

It was the toughest script I have written. But I enjoyed it.

'I have taken wide shots like you see in Hollywood films' 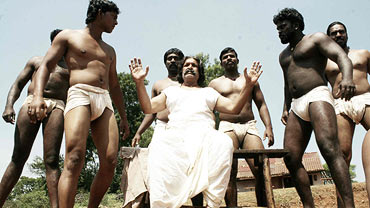 What acquires prominence in the film, the period or the love story?

It is a love story.

How did you recreate the era?

It was tough. I didn't want to go wrong in it as many people in Chennai remember the Madras of the 1940s. I also wanted wide shots like you see in Hollywood films. So, the sets had to be very authentic and large. We created the Central station, the Washermanpet area, Mount Road, etc. Selvakumar is the art director.

I must thank Aghoram Sir, the producer for his faith in us and the content. I can visualize a hundred things in my mind, but I will not be able to execute them unless I have the money. For that I need a producer who has faith in me. Aghoram Sir told us not compromise.

How was it living in that period when Chennai was Madras?

It was beautiful. It was quiet and there were only a few people and vehicles on the road. It would have been great living in the period. I feel Chennai is spoilt now. When the people of Chennai see the film, they will realize what kind of life the residents of Madras had then and how quiet everything was. Today's residents will feel jealous. 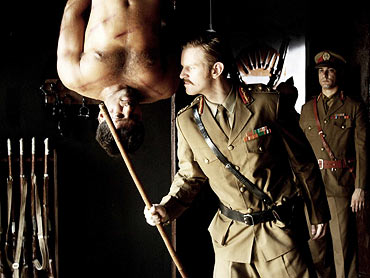 Why did you think of Arya as the dhobi?

I wanted someone who looked good and would be attractive for a rich British girl. He fit the bill, as he is one of the most handsome guys here. We did a photo shoot with the costumes and felt he looked convincing.

We have to only make him look dark. We made sure that he was believable as a dhobi and a wrestler. From the first day of the shoot till the film ended, Arya was Paruthi, the character he played and not Arya, the actor. He is phenomenal in the film. I am glad I cast him.

How did you pick Amy Jackson for the role?

She was a participant in the Miss World pageant and had won a crown. That was how I saw her photo on the Internet. With great difficulty, we tracked her down. She was very co-operative.

What about the language of the film?

Seventy per cent of the film is in Tamil and 30 per cent in English, but we have subtitles.

When the shooting got over, were you relieved or excited?

Relieved. Of course, there was excitement too. Usually, I am told a period film takes at least two-and-a-half years to complete, but we finished the film in eight months, which is a big accomplishment.

How did you manage that?

With planning. It was my Guru Priyadarshan who taught me how to do things fast. I finished Poi Solla Porom in 34 days.