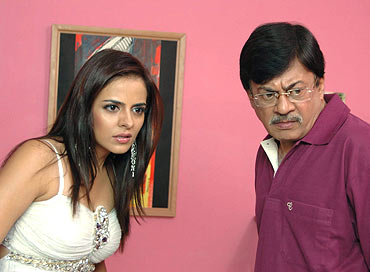 Anant Nag and Suhasini are coming, to theatres near you, to tickle your funny bones in Eradane Maduve! Directed by Dinesh Babu, the film tackles ego issues that arise between a husband and wife.

"We have also shown how these clashes affect the lives of children. It is not enough to dream big for our children. We need to provide them with an atmosphere conducive to achieving those goals. That's what the film sets out to tell," says Dinesh.

The film revolves around Anant Nag, whose character loses his job after being falsely implicated during a Lokayukta raid. His unemployment causes increased domestic disputes with his working wife, only made worse when relatives use the situation to advance their own selfish interests.

Will the circumstances force either of them to contemplate a second marriage? 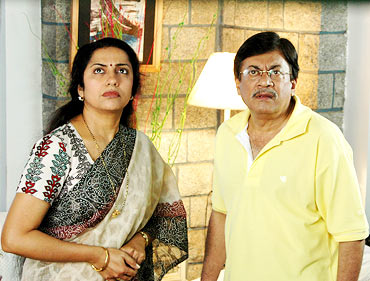 Comedian Sharan plays Suhasini's brother, while Tara is a high-tech maid. "She'll be shown as a fashion conscious lady. Not only is she the president of Maids' Association, but also has a list of 16 things she won't do, including cooking for guests and washing plates," says Dinesh.

Prem also has an interesting role in the film. "I play a lover boy, but there is a twist to the kahani. While I like Suhasini's daughter, Suhasini lands up falling for me," reveals Prem.

Speaking about his work experience with Suhasini, he says, "I was a huge fan of hers when I was young and after seeing her in Telugu film Rakshasadu, wanted to marry a girl like her. I'm glad I got an opportunity to work with her."

The actor also recalls having a blast during the shoot. 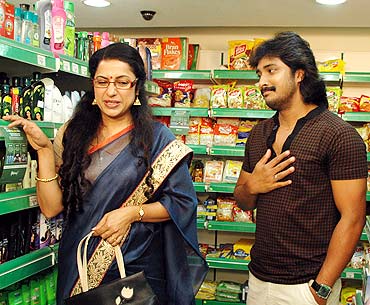 And it looks like he is not the only one who has had fun. Anant Nag is also said to have made an exception to his 'no early morning shoots' rule, because he so liked the team and script.

The film is now being remade in Telugu, a project Dinesh is directing, featuring Suhasini and Rajendra Prasad. It is titled Mogoddu Pillala Pelli. "Suhasini's manager liked the script so much that he suggested it to Telugu producers. Looking at the response that the Kannada and Telugu versions will generate, plans are on to make it in Hindi and Tamil as well," says Dinesh.

The film comes sans any full-fledged songs. There is just one situational number which is said to add to the story.

Suhasini has acted in Bandhana, Suprabhata, Muthina Haara, Matad Matad Mallige and Amritavarshini, among other Kannada films. Her onscreen chemistry with late actor Vishnuvardhan was much appreciated. Deadly Soma 2 and Sanju Weds Geetha are her upcoming releases.