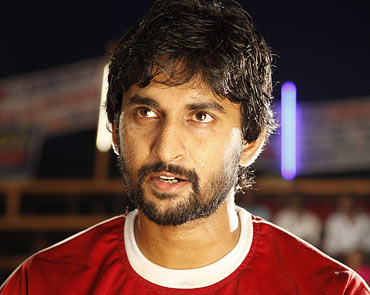 After a great debut in Ashta Chamma, Nani is slowly establishing himself in the Telugu film industry.

His second and third films, Ride and Snehituda, may not have set the box office on fire, but they confirmed Nani's acting skills. Known for his energy, Nani has also developed a perfect comedic timing.

Bheemili Kabaddi Jhattu is a sports-based film dealing with kabaddi. Did you sign it because of that?

It is a remake of the Tamil film Vennila Kabaddi Kuzhu, one of my favourite films. It was also a big hit. So when I was offered this opportunity, I was excited.

Being associated with cinema (as a technician before), I was so involved and connected with the human drama when I saw the original film. I never looked at the technical aspects at all.

'The movie is a love story with the backdrop of kabaddi' 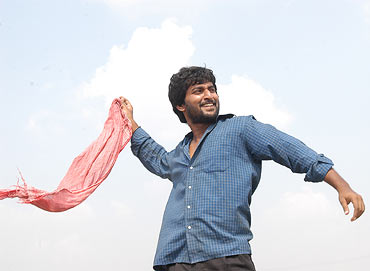 Since the film deals with kabaddi, does it have a rural backdrop?

It's set in a village, where you can't even see a car!

A sports film is not so common in Telugu. The last one was Sye. What's the film all about?

It's not just about sports. In fact sports form the background. Love and emotions are present in the film. It's a 60 per cent love story. One can say it's a love story with the backdrop of kabaddi.

Did you brush up your kabaddi to act in it?

I had played kabaddi as a child. For the film, we had to practice with State-level kabaddi players. We had a stadium set in Sarathi Studios (Hyderabad) where we played, and learned the rules and body language. Now I am a professional kabaddi player and have an alternate profession, too (laughs)!

My opponents were the State-level players. Playing with them improved our game. They laughed initially but were shocked at our performance later. Because we were actors, we could do things like falling when necessary, whereas they found it difficult to take direction and act naturally. So, at the end, these players said acting is tough!

'I haven't done the innocent village-boy role at all' 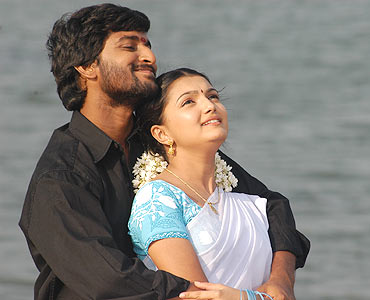 Was it challenging to do the film?

Yes, this was a challenge. My image so far has been one of an energetic guy who is fun loving and has comic timing. BKJ was in total contrast. I have not done this innocent village-boy role at all. So I got excited doing it.

How was it working under a debutante director Satya?

Satya did a fantastic job.

In fact he gave me the DVD of Vennila Kabaddi Kuzhu to watch. When I watched it again, I saw that every scene throws up a challenge. I asked Satya whether he would be able to meet it and recreate the magic in Telugu, because the original film has a realistic approach, and whether we would be able to live up to it doing it in Telugu.

I also saw details which I had missed out when I first saw the film. Satya showed me the background work he had already done and the auditions. I got convinced then to do the film.

'Talent is the most important thing, but you need luck too' 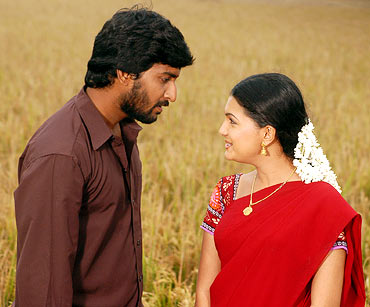 Saranya Mohan is your co-star. How was it working with her?

She did the role in the Tamil version, a role that was tailor-made for her. The role she essays is that of a shy village girl, and she is very apt for it. She acts naturally.

How is it being in the industry so far? You are an outsider with no filmi connection...

I feel good. Being an actor, there are more choices. I can do different genres and more films with different directors and technicians. My start was magical.

Talent is the most important thing, but you need luck, too. At the end of the day, only success matters. If you do a brilliant role in a flop film, nobody will recognise. But if you do an average role in a super film, you get praised.

'I should be happy when I watch a film I've signed' 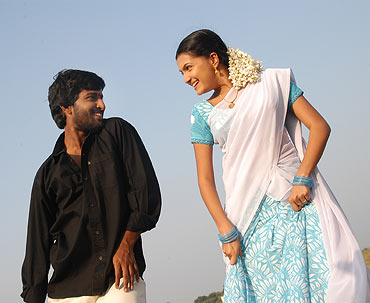 You are doing Ala Modalaindi being directed by Nandini Reddy. What prompted you to sign it?

How do you feel being directed by Nandini Reddy, a woman?

I am also working with another woman director, Anjana Ali Khan, who's directing my Tamil film. There is no difference between a man and a woman. They are directors. They are friends, so there's more fun. The output I give is what they want.

Are you happy with the performance of your films Ride and Snehituda?

Have you signed any film after these two?

I am listening to scripts. Unless I'm happy with the script, I won't sign the film.

I should be happy when I watch a film I've signed.