Arya on his big release 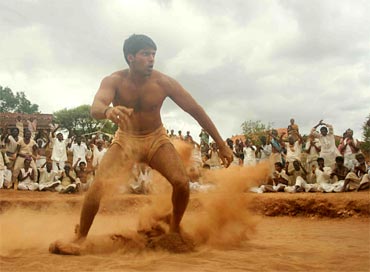 Image: A scene from Madhrasapattinam
Shobha Warrier in Chennai

Arya is one young actor who dares to experiment. Unlike his contempories, he refuses confine himself to romantic or masala films. So far, his most laudable experiment was Bala's Naan Kadavul.

On the 9th of July, he arrives in theatres with Madhrasapattinam, a period film directed by Vijay. The story takes place between 1945-47, and Arya plays a dhobi who is also a wrestler.

In this interview, Arya talks about his role:

When you were offered this film -- which is quite different from the kind of films that are being made -- how excited were you?

When Vijay first told me about the film, a love story that was set in the pre-indepedence period, I was quite kicked about it. Being in Chennai, I was excited to live and see at least for some time how Madras was in 1947! There is no other way I can go back in time and experience the period. The movie ends on the day India wins independence. So I got a chance to celebrate India's independence.

When the whole of India celebrated independence, here was an ordinary guy feeling sad.

You play the dhobi in the film....

Yes, I live in the Washermanpet area, where all the dhobis lived and washed the clothes of the British people. The Governor General's daughter falls in love with (Arya's character). When India and the British army were fighting against each other, these two were in love. When India won independence, she had to go back, leaving him behind. So, its an emotional love story. 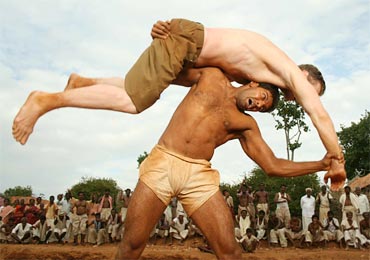 You are also a wrestler in the film. Did you take training to be a wrestler?

We didn't want the usual 'kick and punch' in the action sequences. If he were a wrestler, it would be different. We wanted wrestling to be authentic, so I underwent training. Then there was a gusti guy to advise us on the actions while shooting.

Did you have to work on your body?

Yes, I had to. I was asked to have a bulkier body, and not 6 pack or 8 pack. He should give the impression that he could fight the British army!

How was the experience of transporting yourself to the Madras of 1945?

We recreated the sets of Mount Road, Central Station, Washermanpet, etc. It was a great experience. As everybody was in the costume of that period, it felt as if you were living in that period. Once you entered the sets, it was like you had gone back in time to 1945!

We had trams on the set and when we travelled in the tram through the quiet roads, we felt Chennai was no more beautiful. It has become so crowded and noisy. Can you think of travelling in a boat in Buckungahm Canal now? But in the film, we travelled in a boat. Mind you, it was a set! Life was so peaceful in those days.

Usually it takes years to complete such period films, but Vijay was so well-planned that we finished the shoot in record time. We worked really hard.

'I was asked to underplay my role in Madhrasapattinam' 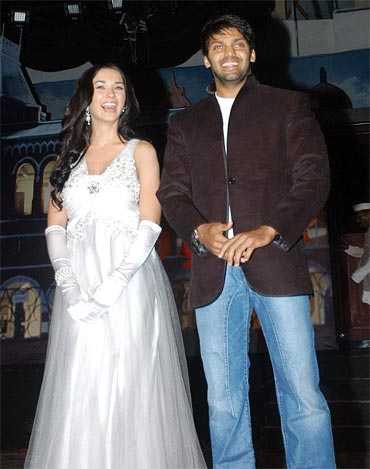 Other than building the body, did you do any other preparation?

As far as the character is concerned, it was controlled by Vijay. I just followed his instructions. I was asked to underplay everything. He is a very ordinary guy and not someone who fights the British army. Him falling in love with her is also not filmy; it is very gradual.

The screenplay is amazing.

How does the Director General's daughter fall in love with a Dhobi?

When we say that, it may sound unbelievable. But the way Vijay has written the screenplay, you will find the love story quite believable. It is funny the way I try to communicate with her and she communicates with me. That is the most beautiful part of the movie.

When you compare the efforts you put in for Naan Kadavul, was this film easy?

You cannot compare any two films. The character in Naan Kadavul was very aggressive and intense. It was very physically demanding. For a period film also, you have to put in a lot of effort.

'It is not characters that I enjoy but the team' 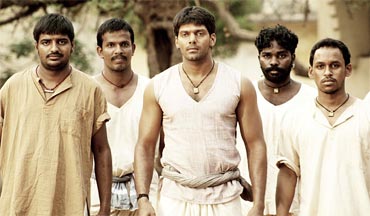 Do you feel you are quite lucky to get roles like these so early in your career?

I feel I am the luckiest guy! Who would have come to produce a Rs. 20 crore film with me as the hero? I must say Kalpathi Aghoram really supported the project. He was not bothered about the cost. I would say that was the biggest support for Vijay, myself and all those who believed in the project. I don't think any other producer in Tamil Nadu would have invested so much money on a project with me as the hero. It was a very bold and encouraging decision. This will encourage others also to put in money if the project is interesting.

What kind of roles you enjoy doing, heavy roles like Naan Kadavul and Madrasapattinam or light hearted romantic films?

It is not characters that I enjoy, but the team. You may get to portray a very good character, but you may not enjoy the project if the team is not good. Thankfully, so far I have had the good fortune to act with good teams.

I also knew, while I was doing Madhrasapattinam, that I must do light romantic films like others of my generation. So, I was working in Chikku Bukku and Boss, both light and romantic films. It was a very calculated decision I made. 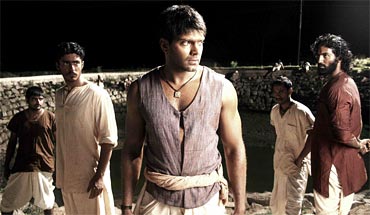 Was it easy working in those light films?

Not exactly. Both are light comedies. It is tough to make people laugh. But it is easy to act in intense roles. Comedy and romance have to come from within and the timing has to be correct. You will not be able to make people laugh with the camera angle!

How was working in the sets that depicted the Madras of 1940s?

It was tough for Amy to shoot in this weather, and we were shooting from 6 in morning till 6 in the evening. In fact, all the actors from the UK found the weather here quite tough. They were shocked to know their predecessors were like they were shown in the film. They used to say, "Were they like this? It's bad."

We used to discuss a lot about the period, and they had a huge culture shock. So, when they went back from the sets, they felt quite relieved.

'Madhrasapattinam is one of my biggest releases' 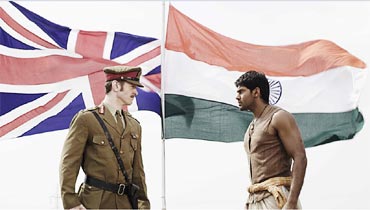 The moment I changed my costume, I realised that I had to get back to the noisy city!

How excited are you about the release?

It is one of my biggest releases. So, I am very excited. My gut feeling is that we have got a winner. I really hope people will like it.
More