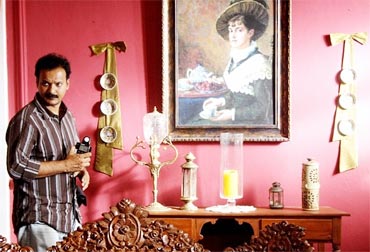 Nirav Shah can be described as the most stylish cinematographer in Tamil films, with Billa the perfect example of his unique style. Those who have watched Hindi films are familiar with his expertise in the Dhoom series and, recently, Wanted.

The stills of his latest film, Madhrasapattinam, which releases tomorrow, have created a lot of excitement among the public.

In this interview, Nirav Shah talks about Madhrasapattinam.

Was it because it is a period film that you accepted Madhrasapattinam?

I know Vijay and I had shot parts of Kireedam.  When we met in a studio, he said he wanted to meet Arya to discuss a story. Arya and me are very good friends. Arya listened to the story and liked it. We took it from there, basically because it was a period film that attracted both me and Arya.

The fact that I have not done a period film before made me try this. The scale at which you work on a period film is different from what you do in a contemporary film. Earlier our period films were made on a limited budget; but today the market is big and the technology is much better; so also the budget.

'We wanted to make a serious film on a wider canvas' 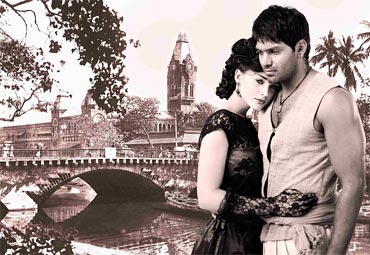 Is it more challenging to shoot a period film than a contemporary film like Billa?

No, both have their own challenges. As it was a new territory for me, I was excited. So, we wanted to make a serious film on a wider canvas, and not limit ourselves to close-ups. We wanted to show the film in such a way that (it was like) we really shot in 1945.

When the director and the cinematographer discussed the film, how did you decide on the look?

We wanted it to look big and like a wide canvas. Then, we started thinking how to get it done. Planning and implementing are two different things. Planning will not cost you anything!

What is the tone and the colour you decided upon for the film?

We wanted a slightly desaturated palette. We didn't want it to look like it was shot yesterday. We limited the colours we used on the sets and the costumes to get the desaturated look. If there are too many colours, it will be distracting for a period film. In the case of costumes, I think, at that time, colours were indeed limited. They used only basic colours. So, we gave an earthy tone to them. If you look at the old photographs, you see more of white. 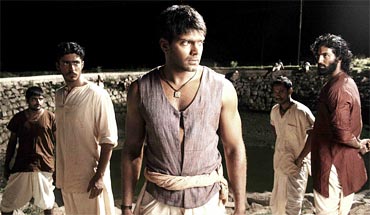 Do we get the feeling that we are looking at an old photograph?

Yes, we want to give that feeling but without making it evident. The tone, anyway, has to be there throughout the film. But it is a commercial film, a love story. So, the actors have to look good, and we made sure that they looked good, because viewers like to see it that way. We want the film and its looks to appeal to the viewers.

You said you have a desaturated palette. Will it not make the film look monotonous?

We have not desaturated it so much that it looks monotonous. We have two tones for the film, and the tones are not too heavy but very subtle and diffused.

In a period film, whose contribution is more important, an art director's or the cinematographer's?

Art Director's contribution is very, very important because it is he who creates the sets. In a period film, you don't shoot in a real location; everything you see in a period film is created.

'Madhrasapattinam most physically challenging projects of mine' 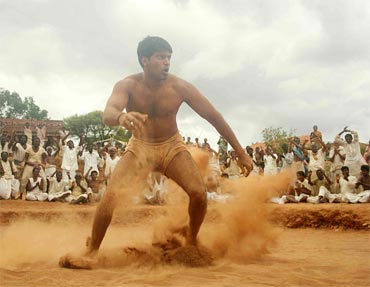 How easy is it shoot a period film?

In a way, it is easy because all the decisions are already taken, and everything is created. The difficult part is executing what is created. You have to make sure that you get the texture, tone and look right. Getting the finish is the difficult part.

It was also one of the most physically challenging projects of mine.

When you look at the past, do you feel there is a stillness about it?

Yes, there is a stillness about the past. That is why we have given it a classical and static look wherever it was needed. We have moved the camera also in one line, and didn't let it go all over the place.

You have brown-skinned Indians, fair-skinned British people and a desaturated tone. How did you manage all these?

That was the most difficult part. We had to find a delicate middle path for the brown-skinned and fair-skinned people. There are many frames where all of them were together. That was when I had to be careful. 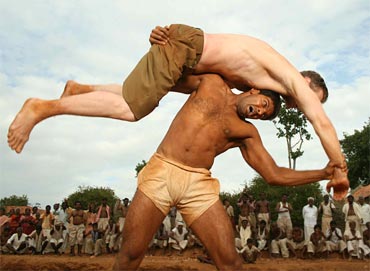 Arya is your friend. How was it working with him?

It is always fun working with him. He is a brilliant performer and a very hard-working guy.

Of all the films you have done so far, where will you place this one?

I hope people forget Billa after Madhrasapattinam. It has been three years, but still people connect me only to Billa. I feel as if I have not done anything worthwhile after that. I am quite disturbed about it. Hope people stop talking about Billa. The impact of Billa was so strong that I can't get out of that image.

Which was the most satisfying work as a cinematographer?

I did a film called Benares and it was very satisfying.  Oram Po was satisfying. Billa was also. Thamizh Padam was fun. Now, it is Madhrasapattinam.