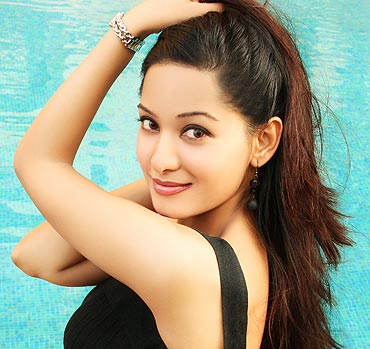 She's a model. She's a journalist. And she's the latest PYT in Tinsel town.

Preetika (she refuses to use a surname) says she decided to try her hand at movies when modelling became monotonous. Her first ad -- for Cadbury's milk chocolate -- was with none other than Amitabh Bachchan. Subsequently, she modelled for Acuvue lenses.

This Mumbai-bred, Sophia College graduate -- who has also been contributing articles to newspapers -- will make her big-screen debut in the Tamil film, Chikku Bukku, which co-stars Arya and Shriya.

"I wanted to do something new, Chikku Bukku came my way and I felt I should it a shot!," Preetika smiles.

'Vidya Balan was busy, so I bagged the project' 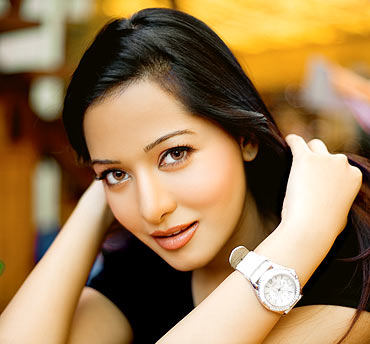 She was originally supposed to mark her entry in films with the Kannada project Raktaksha, directed by National-award winner Rajendra Singh Babu opposite his son Adithya. However, the project did not take off on schedule.

"The production house began making three movies at the same time and then had to hold back our project in order to complete the other two. So they may re-start it any time this year."

Chikku Bukku fell into her lap when the PRO spotted her picture along with the Bollywood column she wrote for a film magazine.

"He approached the editor for my contact. Later, director K Manikandan, an associate of the late director-cinematographer Jeeva, met me in Mumbai and almost instantly signed me for the movie. Initially, he wanted a Hindi actress to play the role and had approached Vidya Balan, but since she was busy with other commitments, I bagged the project!"

'In this profession, girls don't appreciate other girls' 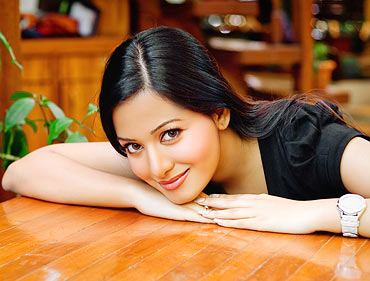 Since she used to come to Chennai to shoot advertisements, she had already picked up a smattering of Tamil. Once she bagged Chikku Bukku, she made a serious effort to master the language.

Her grandmother is fluent in Tamil, but Preetika was born and brought up in Mumbai and did not have the opportunity to learn South Indian languages. "I have Tamil running somewhere in my genes, which makes the lingo very comprehensible!" she says.

Preetika has fond words for her co-star Arya. "He is a fine actor, as we all know. His kinky sense of humour makes me laugh all day on the sets! He is super-cool and a very supportive co-star to work with."

She does not have any scenes with Shriya. "When I met Shriya Saran," she says, "what made me really happy was that she went out of her way to praise her co-actress! Mostly, in this profession, girls don't appreciate other girls. So it was refreshing to see an established actress go out of her way to shower me with praise. Shriya told me that I have a lovely voice, that she finds me gorgeous and that I should join Bollywood ASAP!"

Preetika is waiting for the release of Chikku Bukku before she decides on future projects. What she does know, however, is that she won't let language limit her choice.