Filmi magazines are constantly on the lookout to make their covers better and sexier, choosing from the handful of stars available in the film industry. Abhishek and Aishwarya Rai Bachchan made an exclusive appearance on the cover of Vogue, Twinkle and Akshay Kumar, on L'Officiel.

We spoke to a couple of magazine editors, and asked them to choose their favourite cover face, and what made them so special. Here's what they said.

Favourite Cover: It's tough to pick a favourite. But if I have to pick one, I think our first cover with Kareena Kapoor is very special.

There are a lot of firsts associated with it -- it was the first time we were getting to snap Kareena and Saif together. It was a very exciting and effortless shoot. In fact, on our first day of shoot, it was raining heavily and we were quite stressed out. But Kareena and Saif were super cool.

Another special cover was our anniversary cover with Hrithik Roshan and Katrina Kaif. It was a casting coup of sorts. Nobody had cast them together before and they fit in with our theme very well. They had superb chemistry despite never having worked with each other (Katrina and Hrithik are now working together in Zoya Akhtar's Zindagi Na Milengi Dobara).

The madness behind the cover: Stars are always better prepped up. The first step is getting fit and getting the body. Stars focus on the style and look. They know what fashion labels suit them. They know which make up artists they would like to work with. Sonam Kapoor wore her own vintage jacket for one of our shoots and brought in a lot of energy. That shows how involved they are.

Stars vs models: Stylish covers sell. It's not just about stars. As long as they are recognised faces, they have a selling and staying power.

'SRK is our lucky mascot' 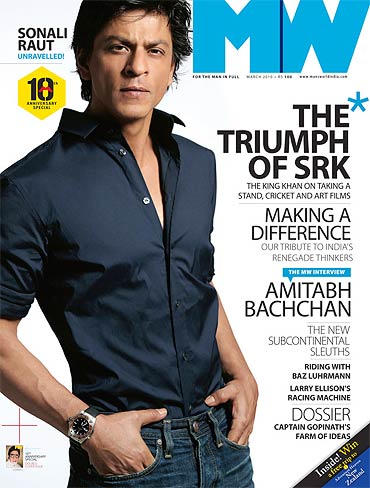 Image: Shah Rukh Khan on the cover of Man's World

He has been on our cover five times in the 125 or so issues that we have done over the last 10 years. He readily agreed to be our first cover in 2000 when the magazine was still on the drawing board and he was already a big star. He was on the cover of our 100th issue, and also on the recent 10th anniversary issue. So in a sense, he has been our lucky mascot.

His cover photographs always reflect the tone of the story inside. The 10th anniversary cover, for example, was shot around the time when he took a firm stand on Shiv Sena's threat to My Name Is Khan. He is very professional. An issue with him on the cover always sells.

Abhishek Bachchan is also a good seller even though he hasn't had that many successful films.

Star Fuss: From what photographers and stylists tell me, it varies from actor to actor. Some are more professional than others. Everyone wants to look good so they are generally cooperative. The bigger stars always insist on working with their favourite stylists, fashion designers and photographers because of their familiarity factor. 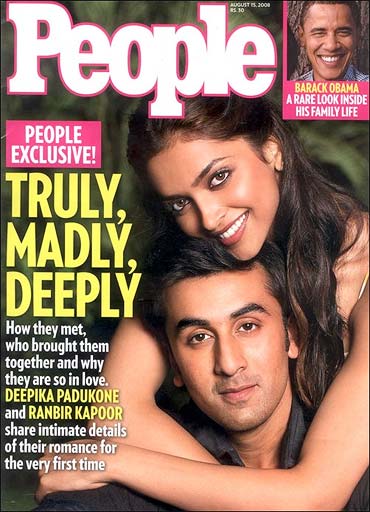 Image: Ranbir Kapoor and Deepika Padukone on the cover of People Magazine

Favourite cover: One of my all-time favourite covers is an early issue featuring Ranbir Kapoor and Deepika Padukone. It was their first-ever joint interview after stepping out as a couple. The interview and the photo-shoot was magical, as they were relaxed and at ease with each other, reflecting their fresh romance. For PEOPLE, which, at that time, was only three issues old, the exclusivity with the two stars made the story a huge get.

The madness behind the cover: Stardom being what it is these days, the burgeoning entourage is inevitable. Broadly speaking, earlier you would have the magazine team, the photographer, the star secretary, the make-up man and the hair stylist. To that, you can now add the publicity team, the stylists' assistants and other assorted people whose job at the shoot is difficult to fathom. The best people on a shoot are those who can keep cool in any situation and who have less airs than the stars themselves. 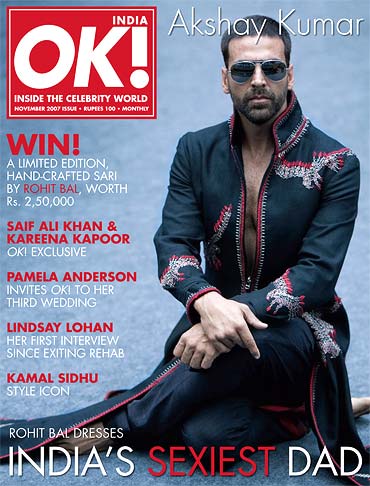 Image: Akshay Kumar on the cover of OK! INDIA

Favourite cover: OK! shot Akshay Kumar for our first 'India's Sexiest Dad' special issue in November 2007. Though we have had many powerful, beautiful and successful celebrities on the cover since, that particular shoot remains special.

For one thing, it was a dream team. Akshay's popularity was at its peak and he was a pleasure to work with. Rohit Bal flew in from New Delhi to dress and style him personally and Jatin Kampani shot the feature. It was the first time Akshay and Rohit Bal had really interacted and Akshay enjoyed the OK! shoot wardrobe so much that he bought two outfits from our spread on the day of the shoot itself. The sherwani that he wore in the cover was featured prominently in the promotional material of Singh is Kinng. We were up till 4 am because Akshay likes to maximise his mornings and that was no small feat, especially for Bal!

Star Fuss: With the influx of so many international titles and with shoots becoming more stylised and fashion-centric, I think there is an increased emphasis on shoot wardrobes and stylists. Some stars have a more extensive entourage while some are more particular about the feature's photographer or stylist than others.

The one star we wish we could feature on our cover is Aamir Khan.

'Lara is well turned out' 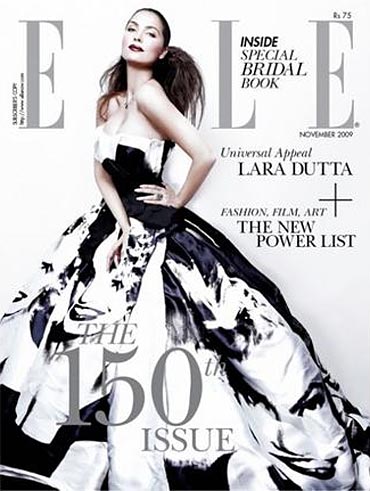 Image: Lara Dutta on the cover of ELLE

Favourite cover: Lara Dutta on our 150th cover last November was very special. Lara is a complete professional. She is well turned out, easy to deal with and brings flair to the magazine.

Star Fuss: Every star brings something interesting to the table. Sometimes, just the way they are in front of the camera makes them amazing. Like, Freida Pinto has had many photoshoots. But the way she was presented on our recent cover made everyone sit up and talk!