Akshay Kumar, jack of all trades

Anyone can play a conman, a cop, a crook or a billionaire.

Akshay Kumar's done all of that, but as his upcoming release shows, the actor likes his leading men to dabble quite a bit with unconventional professions.

Here's a look at his ten most recent weird professions:

In Priyadarshan's upcoming film, one billed as not quite as comic as his other films, Kumar plays construction contractor Sachin Tichkule -- apparently a man given to doing anything it takes to get the job done, greasing palms and all.

In Sajid Khan's multistarrer, Akshay plays Aarush, a man with such accursed luck in life that he is hired by a casino to be a bad luck charm for people who win too much.

The bad luck run eventually culminated in bad luck at the box office as well.

Image: A song from Kambakkht Ishq

And not just any stuntman, but one who hobnobs with stars like Brandon Routh and Denise Richards, and is felicitated by action movie icon Sylvester Stallone.

Image: The making of Chiggy Wiggy with Akshay and Kylie

In Anthony D'Souza's massively expensive underwater actioner, Kumar stars as Aarav Malhotra, owner of a fishing company in the Bahamas -- and a man very keen on exploring legends about undersea treasure.

In Nagesh Kukunoor's psychological thriller, Akshay plays a forest ranger called Jai Puri, a profession that gives the actor a nice backdrop to show off his freestyle running skills.

His character also has the ability to enter a photograph by looking at it really hard.

In Nikhil Advani's disastrous international project, Kumar plays Sidhu Sharma, goofy Delhi cook who goes off to China to become a warrior and take on a local despot.

Despite all sorts of antics and tomfoolery and grooving to DJ Whosane's hit version of the title song, Akshay's character in Priyadarshan hit Bhool Bhulaiyya happens to be that of a psychiatrist.

And while Champu might look and act funny, he is a highly successful astronaut.

In Raj Kanwar's Canada-based romance, Kumar starred as Aditya Malhotra, an automobile engineer who is so passionate about driving that his company lets him drive their rally car in a race. 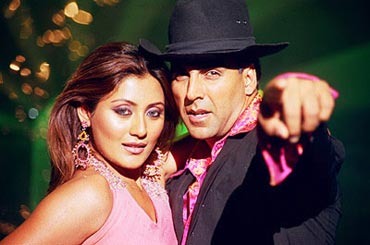 Vikram Bhatt's ripoff of There's Something About Mary sees Kumar in the role of Rocky Hiranandani, private investigator. Hired to find Rimii Sen, he ends up falling for her and lying through his teeth.

This hilarious Priyadarshan farce sees Kumar at the height of his comic powers as he juggles air-hostesses around.

And the playboy is a fashion photographer: a job only given to Kumar so he can cavort around skimpily clad women. Not that we're complaining, of course.