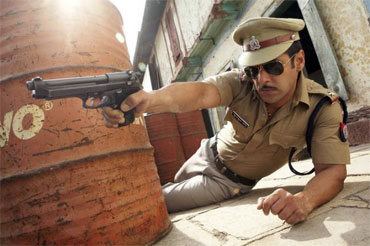 Salman Khan is creating a lot of buzz on twitter. Everybody is raving about how good his next film Dabangg looks.

Imran Khan tweeted, 'Just saw the Dabangg trailer! It looks like SUCH a fun movie. @BeingSalmanKhan is in top form, kicking ass, cracking jokes and dancing.'

Karan Johar tweeted in his praise to Salman's co-star and newcomer Sonakshi Sinha, 'You are looking lovely and have rendered that one line superbly in DABANGG!! Welcome to the movies girl!!!'

Sonakshi, the star daughter of Shatrughan Sinha, tweeted some feedback on her: 'Spoke to 1 of my fav actresses - the awesome Rani Mukherji last nite. said she loved the Dabangg trailer and me in it! on top of the world!'

The celebrations have begun, if we go by this picture posted of the Dabangg team celebrating at Mumbai's Olive restaurant.

Love is all around Sanjay Dutt seems to be happy wearing his heart on his sleeve. This actor states, 'First time in last six years, I am not with my wife for her birthday. missing her a lot. god bless her always. Thank you for wishing and blessing my wife. Going to sleep, have an early morning tomorrow. Love to all.'

Shilpa Shetty and husband Raj Kundra found their way to the Eiffel Tower on their European holiday. The actress who also spent time 'marking' the golf course said, 'Been 2 Paris many times bt hav never been up d Eiffel tower, alwys wantd 2 visit it with my husband (jus a dream) so Raj n me goin up tonite:)'

Bipasha Basu, who is quite open about her relationship with John Abraham, tweeted, 'Thank u all fr being so respectful towards us as a couple :) D day we decide to get married all will get 2 know.☺' After making an occasion of every event, it's no surprise that last week's Guru Poornima was much celebrated by Bollywood.

Director Karan Johar tweeted his thanks to his closest friends in the industry. 'Guru purnima today... have to thank aditya chopra and shah rukh khan for teaching me everything I know...'

He got a prompt reply from SRK: 'Yeah touch my feet today when u see me. Also get me some cool gift & i will give u ashirvad.'

Shah Rukh passed his thanks around too. "On guru purnima, I thank all my teachers & all the films I am part of. Both have taught me...how much more there is to know.'

Dia Mirza tweeted her thanks to her family: 'On Guru Purnima, I bow my head in gratitude to my Parents, Teachers, Guruji n all those who have taught me. Blessed 2 have ur guidance. I remember most of my teachers! Love this line; a teacher affects eternity.' He tweeted: 'It's unusually calm and quiet!!! Sitting at home enjoying my Sunday on a Monday. Sitting with my Ma. How do women do it? Multitasking that is! She's reading the papers, on the phone, ordering lunch, supervising the cleaning and chatting with me all at once!!!'

To which friend Riteish Deshmukh replied, 'I tried to do that once: I ended up reading the newspaper to the person who was taking down my order.'

Bachchan Jr also tweeted songs from the yesteryears ending with his parents' evergreen number, Teri Bindiya Re from Abhimaan, 'Ma giving me a crash course in old Hindi film songs. Some really old ones!! They definitely knew something we don't.'

Bachchan Jr was not alone in tweeting about woman power. His father Amitabh Bachchan followed suit, 'At the dentist, and all goes well First time seeing lady dental professionals at work .. Errrmm .. They were more gentle!!' 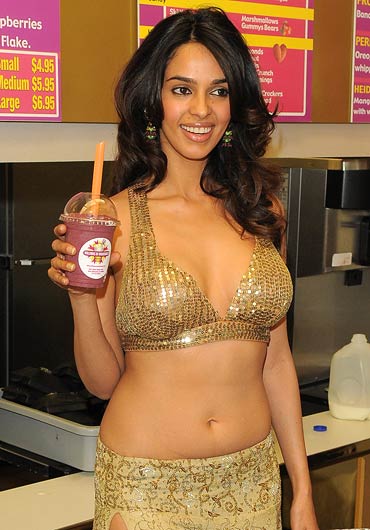 Is this a good profile picture? Mallika Sherawat wants to know.

Preity Zinta is captured on the sets of her new commercial

Priyanka Chopra, wrapping up her 20 hour-long day on the sets.

Shah Rukh, on the sets of RA1. Later, Karan and Kareena join him.

Konkona Sen Sharma and Bipasha show off their traditional Bengali side. Later, Bipasha seen with John at a friend's wedding.

Horsing around with Imran Khan.