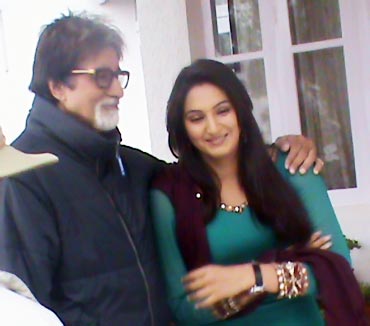 Get your low down on what's happening in Kannada cinema, right here!

It was just like old times when actress Ramya met Amitabh Bachchan recently in Ooty.

The actress, who shared screen space with AB in her super hit film Amruthadhare says, "I had gone to meet Sumalatha aunty who was shooting for the Malayalam film Kandahar with him. I knew he was on the sets but was a bit shy to meet him as I didn't know if he would remember me. I mean it's been a while since we had done that film and he keeps meeting so many people every day! When the director introduced me to him, I was shocked to find that he recognised me. Seeing and talking to him made my day."

The actor even introduced her to Mohanlal, she adds. "While shooting for Amruthadhare, he used to read my hands and predict my future. On this occasion too, he did the same and jokingly told Mohanlal that this was one way of holding the hand of a beautiful girl! He is a very humble person."

Actress Ragini Dwivedi who is in two of Amitabh Bachchan's four scenes in Kandahar seconds Ramya.

"When I saw him for the first time, I was a bit scared and hesitant to talk to him. But I soon realised that he was such a down to earth person. We shot for two days and in one of the scenes I even got to hug him! We discussed my Kannada films and he was pleased to know that I had done over five films in just over a year and that I was venturing into Malayalam, Tamil and Telugu," she says. 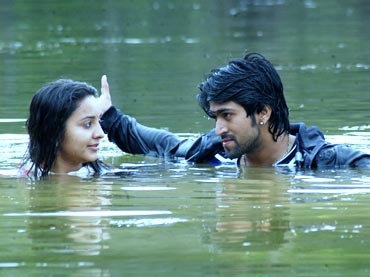 Image: A scene from Modalaasala

Love stories never go out of fashion in Indian film industry and cashing in on the genre this time is Karnataka Talkies (The producers being fans of Mani Ratnam and having liked all the movies made under his banner Madras Talkies, chose to name their banner Karnataka Talkies). The production house hopes to make a mark with Modalaasala, a "simple love story."

"Like the title suggests, the film is about first love," says lead actor Yash. In the film he plays a rich boy with a 'never say never' attitude. "My character is talkative and jovial. Things change after I fall for an innocent girl. The film highlights the experiences of those in love," he adds.

Bhama is the heroine while Rangayana Raghu, Yogesh Narayana, Tara and Sharan play supporting roles. Music is by Harikrishna.

"There are a few foot tapping numbers in the film. Shooting for Nan heart modalaasala the title track was extra fun as I got to show off my dancing skills," says Yash who is popular for his dance moves.

The film is set for a September release and in order to generate more publicity, the team has fallen prey to 'coupon marketing'. The hundred rupee coupons, that are made available to public, can be exchanged for movie tickets. The film's audio CDs will given along with the coupon. Coupon holders will watch the film in multiplexes.

"Proceeds from the sale will be used to provide defloride water filters in Tumkur district. Money will be channelized towards improving the health conditions of the poor in the district," say producers Mallikarjun and Yogesh.  "A certain share of profits from our future productions will also be used to address social concerns," they add. 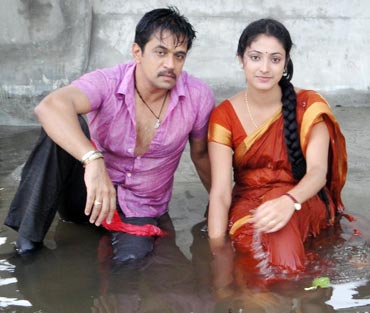 Image: Haripriya and Arjun in Vallakottai

"We shot in Italy, Dubai and Jordan and came back with fond memories. I enjoyed the dance sequences with Shivarajkumar too," she recalls.

The actress also has a Tamil film in her kitty. "I have acted opposite Arjun Sarja in Vallakottai. I play an accountant who hails from a village. So you will see me in traditional attire through the film unlike in my previous Tamil film Kanagavel Kaaka."

Speaking about her co-actor Arjun, she says, "Working with him was a great experience. Also we spoke in Kannada during the shoot."

Speaking of Kanagavel Kaaka, it is said that the film is likely to be made in Kannada and the director of the original, Kevin Bala is keen on casting Haripriya again.

Haripriya will also be seen in the Kannada film Nande. Sri Murali is the hero. She plays an NRI in the film. Her last Kannada release was Kallara Santhe.