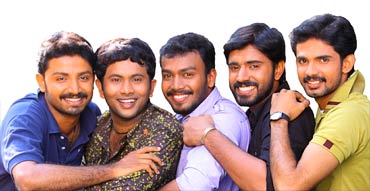 Vineeth Sreenivasan, who has by now proved his credentials as a singer and actor (he has played the hero in two films, Johny Antony's Cycle and V M Vinu's Makante Achan), turns scenarist and director with his debut Malayalam movie, Malarvady Arts Club.

With five young men selected for the lead roles through a talent hunt, it has become one of the most eagerly expected movies in recent times.

The film was launched at a function where some of the biggest names in the industry, including Mammootty and Prithviraj, were in attendance. The music of the film was released recently.

"The friendship between five youngsters is the basic premise here. The story happens during the period when they have completed their studies and are on the lookout for jobs. They had a Children's Club which they have now developed as Malarvady Arts Club," says Vineeth. 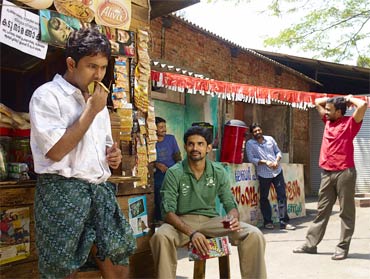 The first task was to script the project, which he then showed to his dad, well known scenarist, actor and director Sreenivasan.

After getting his father's approval, Vineeth went ahead with the project. Actor Dileep agreed to produce the film and P Sukumar was roped in as the cinematographer.

The search for the five leading men was done through a talent search and rehearsal camps. For now, the five are known by their screen names.

"We all wanted to be part of films and are thrilled to have such a fabulous opening. Of course, our characters differ in their natures and thoughts, but they are all good boys basically," laughs the five. 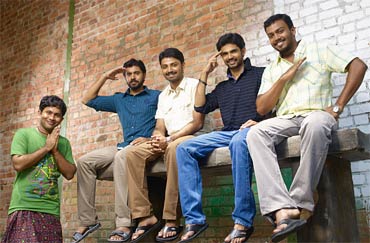 Prakashan, with a beard, is perhaps the leader of the gang. He has a jeep of his own and behaves quite instinctively. He is short tempered by nature.

Praveen is a musician and plays the guitar. Perhaps like most musicians, he is soft spoken.

Purushu, is a kid at times and can turn serious any moment as well. He is a romantic at heart too.

Santosh is the odd man out. He belongs to a rich household, but loves to be among his friends.

Kuttu, the fifth member of the group, has failed in Class X. Unlike others, he has no talents to speak about, but yes, he is quite excited to be with his friends. 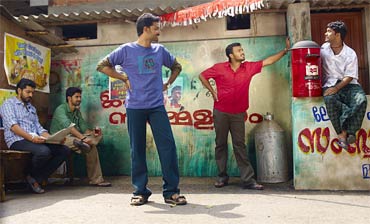 The shooting of the film was mainly completed at Shornur and nearby areas.

"We had undergone rehearsals and there were no confusions during the actual shooting. Of course, we had some problems facing the camera in the beginning but then we got used to it soon. There were no tensions, it was a friendly atmosphere all around," says the gang.

Besides the five, there are two girls who become part of the story, Revathy and Geethu.

Malarvady Arts Club will hit the theatres in July.