'Raajneeti was not an easy film to do' 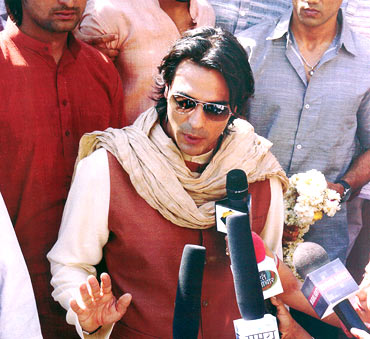 Arjun Rampal's career is going great guns, thanks to Raajneeti's success and two big films -- Shah Rukh Khan's Ra.One and a remake of Stepmom starring Kareena Kapoor -- in his kitty.

Success didn't come easy, though. It took him six years and 21 films before he got his due in Om Shanti Om and Rock On!!.

Sitting at his Bandra penthouse in Mumbai with dog Demi in tow, Arjun spoke to Nithya Ramani about Raajneeti's success, his performance, Ra.One and much more. Excerpts:

You were great in Raajneeti...

Thank you. This was not an easy film to do. I signed this actually six years ago. Prakash Jha (director) wanted me as Prithvi even before Om Shanti Om or Rock On!!. This film definitely will go a long way for me.

'I closely followed the Scindhia family' 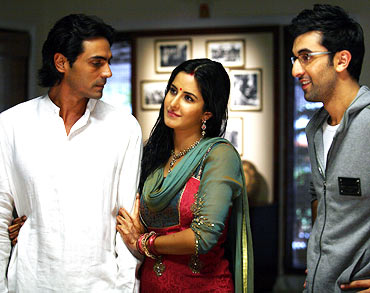 Yes. Jha had to do extensive research. When a person is so passionate, you want to give so much more back and with the way the audience has reacted, I think we have done a good job. We are very proud.

What he really wanted to do was to take a few characters from the Mahabharat and use them in a very modern day political setting. He came up with a story of a family of third generation politicians. He asked us to study as many politicians as possible to get a feel of how they behave. I saw a lot of footage of young Rajiv Gandhi and Sanjay Gandhi. I closely followed the Scindhia family too, how they walk, talk and how confident they are on stage because confidence was the key to Prithivi's character.

Jha also created the whole environment -- thousands of people while shooting in Bhopal, while you stand up on stage, throw garlands and rallies. The whole set up was so fantastically done, that it makes your life much easier.

'Ranbir is very close; he is part of my family now' 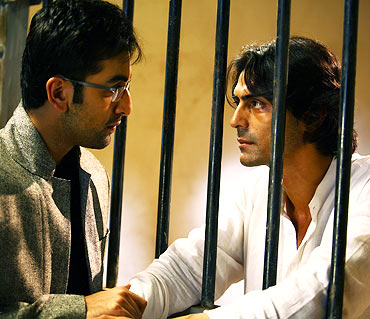 How was it working with Prakash Jha?

I have always been a big fan of his work. He always has a message in his movies and I think this is one of his most ambitious projects. He is one of the most generous, kindest, funniest and loving persons I have ever met. You can call him up in the middle of the night in panic about the speech you have to deliver and he will immediately calm you down.

The best part is that he is a good actor himself. In fact, he has acted in a scene in the film. Sometimes he shows you how he sees the scene. To be able to bring everyone together on the same page on such a big canvas makes him a true hero.

Jha, the director is very clear about his work; he is focused. But as a person he is very chilled out and laid back.

Tell us about your bond with Ranbir Kapoor. He said in an interview that he is jealous of Mehr (Arjun's wife)because she has you.

[Laughs] He is a sweetheart. We play brothers in the film and we wanted that bond to be special. It feels great to take home the relationships that you make during the film.

The relationship I share with Ranbir is very special; he is part of my family now. I hope we can do something else together.

'Shah Rukh and I have done most of the action for Ra.One ourselves' 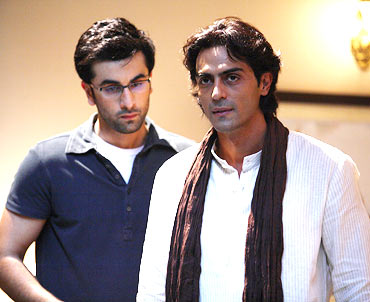 How was it working with Katrina Kaif?

Fantastic. I remember a time when Ranbir, Katrina and I were sitting for lunch and she flipped out asking us why we didn't order the yellow sauce. None of us understood what she meant by yellow sauce. We went through the whole menu over and over again wondering what she meant. It was only later that we discovered that she was talking about Tadka Dal. Now we call it yellow sauce too. We pull her leg a lot.

You are working on Ra One. Could you tell us what the film is about?

It is too early to talk about the film. The only thing I can tell is that it is a super hero film. It is a lot of hard work and physically very challenging. I play the super villain. Since Shah Rukh and I do most of the action ourselves, it is very tiring.

The shooting for the remake of Stepmom is complete. How was your experience working on that film?

The movie is releasing on October 1. It is a very lovely movie and I am sure everybody will cry and fall in love with their mothers all over again. I am eagerly looking forward to it and again it is a very different character. I think people should carry a lot of tissue paper with them when they go to watch it.

It was lovely working with two beautiful actresses Kajol and Kareena and three lovely children. It is fun film that will touch your heart.

'Karan Johar is the best producer in the world' 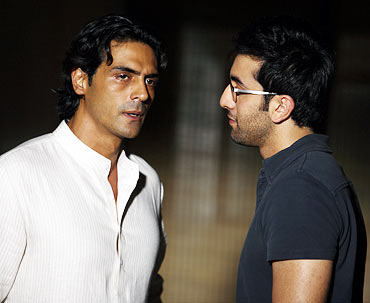 How was it working with the actresses?

Kajol is one my favourite actresses and it was a dream come true to work with her. It was fantastic. And Kareena is in the best phase of her life for the kind of work she is doing. We share a great work chemistry.

Like her, I am in a phase where things are working out well for me. I am enjoying what I am doing and good roles are coming my way.

How is Karan Johar as a producer?

He is the best producer in the world. He looks after you so superbly that he has spoiled us for other producers [laughs].

What other passion do you have apart from acting?

I also like to play a lot of tennis, travel, read and spend time with my children. I think they are the best barometer of your performance.

Have they watched Raajneeti?

They are just four and eight so they're too small to watch the movie. But they are very intelligent kids. I am happy when I can give them films like Housefull and Rock On!! I will watch Raajneeti with them in a few years from now.

What was Mehr's verdict about your performance?

She loved it. She is my worst critic. When she says she likes it then I know I'm going to get good food at home [laughs].