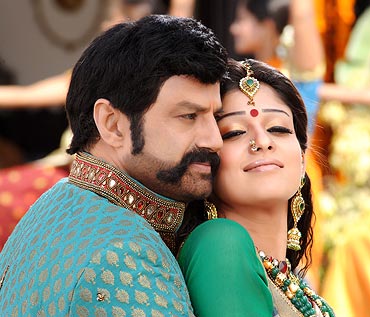 Image: A scene from Simha
Radhika Rajamani in Hyderabad

The year 2010 so far has seen an interesting mix of films within the commercial format -- some hard core masala, while others have been thought-provoking.

The first half belongs to the younger heroes like Allu Arjun, Manoj Manchu, Rana Daggubati and Akkineni Naga Chaitanya who have made a mark with their films.

Here's the list of five top films from January to June which have more or less struck a balance between commercial success and critical acclaim.

Simha was a perfect film for Balakrishna's fans as it had all the staple ingredients -- high-voltage action, excessive violence and songs. But it was something to cheer about for Balayya. He put in a restrained performance (more so in the flashback episode) which won him praise.

Fully made in the commercial genre, Simha had three heroines -- Nayanthara, Namita and Sneha wherein Nayanthara had a fairly decent though short role.

The film, essentially made with Balayya's image in mind, brought a smile on his face as it tasted success at the box office. Balayya's dull patch came to an end with Simha.

Supposed to have been made on a Rs 16 crore budget, Simha seems to have grossed over Rs 45-50 crore. 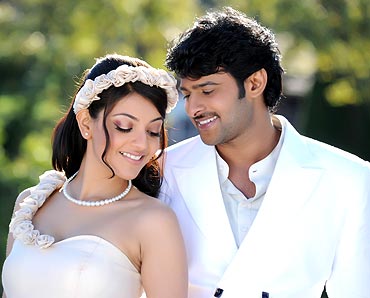 The director, known for his love stories, came out with this one featuring Prabhas and one of the hot heroines of Telugu cinema today, Kajal Aggarwal. Though the film was rather cliched, the director added his twist in the interval.

The first half seemed redundant to some extent as the main film began in the second half. Shradda Das was the second 'heroine'. But this was essentially a Prabhas film and hence was full of action, romance (in the cool environs of Switzerland) and humour.

Andrews' camera work captured the beauty of the Swiss locales. The action sequences too have been well orchestrated by Peter Heins.

Despite the lack of story in the first half, the film did rather well perhaps due to Prabhas' presence (he has a sizeable fan following) and Karunakaran (whose love stories have fared well).

Touted to be made at a budget of approx Rs 20 crore, Darling seems to have garnered a gross of Rs 30 plus crore. 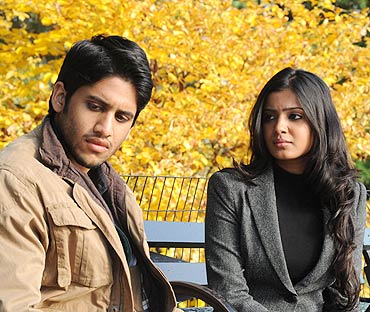 This bi-lingual (made in Tamil as Vinnaithadi Varuvaya with a different star cast, producer and different ending) was a smash hit and crossed the 100-day mark in both the languages.

Gautham Menon's simple love story with a fantastic screenplay lent it credibility. A tale of a boy who falls in love when he is at a confused stage which is further complicated by the girl presented a slice of life.

It gave Naga Chaitanya a much needed hit (after the average Josh) and introduced Samantha, a new heroine who is now on the much-wanted list in Telugu cinema.

Produced by Manjula Swaroop in Telugu, Ye Maya Chesaave has shown that love stories may be dime a dozen, but the deft handling of the script can make an enormous difference. 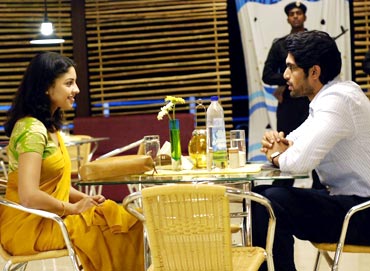 Sekhar Kammula who has made a mark and created his niche in Telugu cinema shifted genres and made a 'political' film with Leader wherein he introduced Rana Daggubati as the hero.

A relevant take on the contemporary politics of the state, this film was idealistic on the part of Sekhar Kammula. In a sense it was a wish-list of what people would like to see in politics and among politicians.

Sekhar drew good performance from his hero Rana. Leader introduced two heroines -- Richa Gangopadhyaya and Priya Anand, which set their careers going in Telugu cinema. Suhasini was elegant as the mother while Kota played the 'political patriarch' to the hilt. Mickey Meyer's music was an added facet.

The film was produced by the renowned banner AVM. The scale of the film was pretty large as it was shot on sets and in quite a few places in Andhra Pradesh.

Even though the film was a bit far-fetched and simplistic, it was appreciated for its honest approach. The film was supposed to have been made at a budget of Rs 15 crore and it is said to have recovered that. 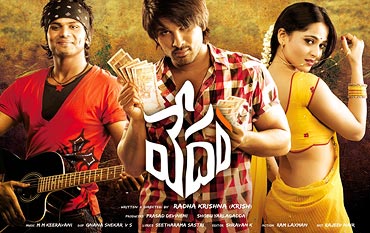 Image: A scene from Vedam

This outstanding film (which released on June 4 with 225 prints in 350 screens) with a 'five-stories' format coalescing into one, has won accolades from the audience as well as from the critics.

In a sense, this film is a trendsetter as it is multi-starrer which presented a new portrayal of the heroes. It's shown a new path to Telugu cinema and is creating ripples everywhere, be it within the state or in the US.

The script, with its solid and empathetic take on human relationships, is realistic, relatable and believable. Krish has done a great job in blending human emotions in this film and the second half particularly portrays the emotional turmoil in each characters life brilliantly.

Shot well, the film has great performances from its cast -- Arjun, Manoj, Anushka, Mamoj Bajpai, Ravi Prakash, Saranya and debutante Nagayya, a poor weaver in real life who translates that on screen.

M M Keeravani's music especially the two songs Malli Puttani and Ee Chikati Cherani touches the heart as much as the story. The other highlights are the stunning visuals a result of Gnansekhar's brilliant camera work and Shravan's smooth editing.

The film opened well and has been steady in its performance after the first week of release. It's no wonder then that it opened to a smashing first week collection of Rs 10.5 crore and the buzz is that it has made Rs 15 crore and recovered the budget in 10 days.

Prasad Devineni and Shobu Yarlagadda who produced the film under Arka media have already signed Krish for their next project!