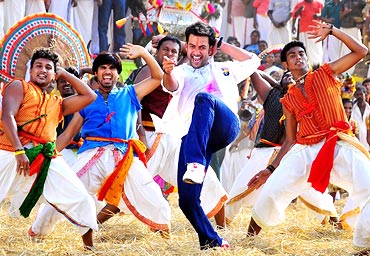 Image: A scene from Pokkiri Raja
Meghna George in Kochi

Nobody seems to expect much from Malayalam cinema these days.

No wonder, things have not been great in the first half of 2010. There have been a few hits among the less than 30 releases during this period, but even those films were not great.

Two films which stood apart from the rest, considering the sincerity and efforts that went into the making -- Nayakan and T D Dasan Std VI B, failed to set the cash registers ringing.

Be that as it may, here's a look at the winners during the first half of the year.

Debutant director Vysakh managed to hit the bull's eye with a rather ordinary but enjoyable film that didn't demand logic from its viewers.

Mammootty plays Prithviraj's elder brother and the two are ready to bash up the baddies at the slightest provocation. Formulaic to the core with every ingredient expected from a masala entertainer, Pokkiri Raja however managed to give a crucial break to both the heroes. 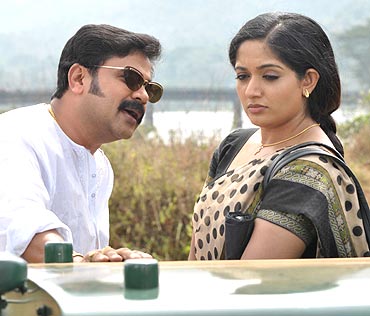 Image: A scene from Pappi Appacha

The hit pair of Dileep and Kavya is back with a bang. Pappi Appacha was about a father and son, who were rich, brash and idiotic.

Innocent played Dileep's father on screen. The film's strength was its humour. For Dileep, Pappi Appacha gave him reason enough to cheer.

Produced by his brother Anoop, the film had a great run during the summer vacations. 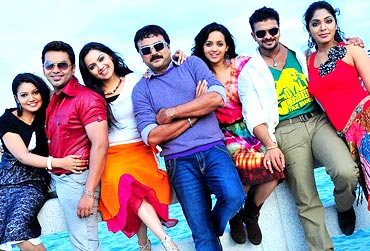 Image: A scene from Happy Husbands

Happy Husbands was inspired from the Tamil movie Charlie Chaplin and the Hindi laugh riot No Entry. But that didn't deter the amazing run of the film at the box office.

It was a winner from the word go and Saji Surendran continued with his winning streak after the success of his debut film, Ivar Vivahitharayal.

Jayaram, Indrajith and Jayasurya played husbands who cheated on their wives behind their back. Bhavana, Samvritha Sunil and Vandana played their respective wives while Rima Kallingal starred as a bar dancer.

This film made everyone laugh and how! 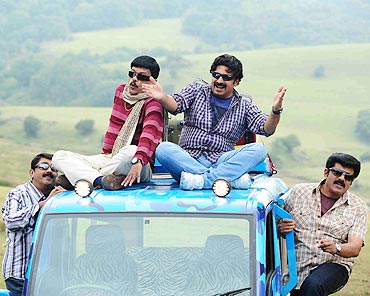 Image: A scene from In Ghost House Inn

The first part, In Harihar Nagar, had come almost two decades back and is still regarded as a cult comedy. 2 Harihar Nagar that came last year was a super success.

The third part of the Harihar Nagar series took a spooky turn this time, but it lacked the usual fizz. Still, Mahadevan (Mukesh), Appukkuttan (Jagadeesh), Govindan Kutty (Siddique) and Thomas Kutty (Ashokan) became a hit, thanks to the fantastic initials.

In Ghost House Inn had its moments, but it failed to live up to the hype. 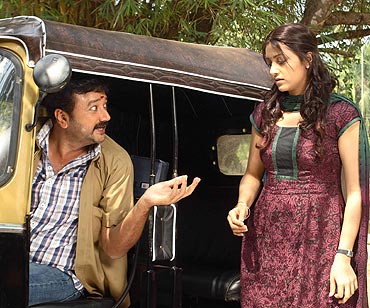 Image: A scene from Kadha Thudarunnu

Sathyan Anthikkad's tag is regarded as a guarantee for clean family entertainers. It worked for the director once again, as he presented the sad tale of a woman, who is left with nothing after her husband's murder.

The film has its flaws for sure, but it turned out to be an engaging watch and that perhaps helped the film to break-even. 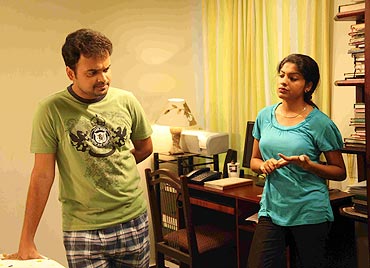 Image: A scene from Mummy and Me

Writer-director Jeethu Joseph had showed promise with his maiden film, Detective and this time, he had a splendid story in Mummy & Me. The film narrated the tensions between a teenage daughter and her strict mom.

Archana Kavi, who had a great debut with Neelathamara fared well and Urvashi, as always, was good.

The film could have been better, especially with its style of presentation, but still makes a definite impression and is soon turning out to be a hit.