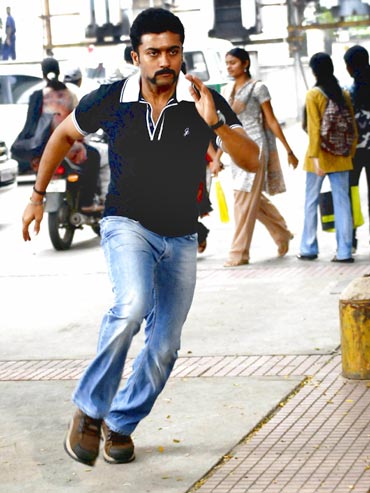 Image: A scene from Singam
Pavithra Srinivasan in Chennai

Known as an entertainment juggernaut for the sheer number of films that its churns out every year, 2010 was supposed to be no exception for the Tamil film industry.

While some were disappointing, others were genuinely surprising.

Here's the half-yearly report-card for the Tamil film industry:

After a string of not-so-great films, Sun Pictures seems to have struck gold with this Suriya venture.

Produced by Studio Green, Singam was helmed by Director Hari, known for earlier hits like Saami and Vel. For Suriya, this is another outing as a cop. He plays Duraisingam from Nellore, Thoothukkudi with a fierce passion for justice, and a roar that threatens to bring the heavens down, with the aid of graphics.

Lending a romantic touch is co-star Anushka Shetty, a sensation in the Telugu film industry.

With a screenplay that moves at breakneck speed, Suriya's own screen presence and perfect masala components, Singam, released on May 28, has been raking in the moolah everywhere.

Trade pundits predict that it will surpass even his own Ayan's record in 2009, satellite and overseas collections included, bringing in more than Rs 40 crores when it ends its run. 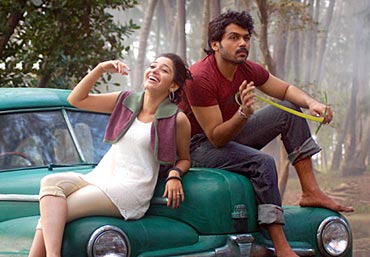 Image: A scene from Paiyya

Director Lingusamy has made a name for himself with his ability to combine romance and adventure into a likeable package with earlier hits like Run and Sandakkozhi.

For Paiyya, a home production in the form of Thiruppathi Brothers, he chose a distinctly different script in the road movie genre.

Here hero Karthi plays Shiva, a perennially jobless guy, who catches a sudden glimpse of Charulatha (Tamannaah, the It girl of the season) and falls for her.

Paiyya, released on April 2 had very little in the way of a story, but the novel genre, Karthi and Tamannaah's chemistry, and Yuvan Shankar Raja's blockbuster album went a long way towards cementing its success.

Such was their combined appeal that the Rs 12 crore movie eventually earned around Rs 30 crore for its distributors, not to mention returns from its Telugu incarnation, titled Awara to the tune of Rs 3.5 crore.

Not surprisingly, Paiyya was declared a super-hit by the trade. 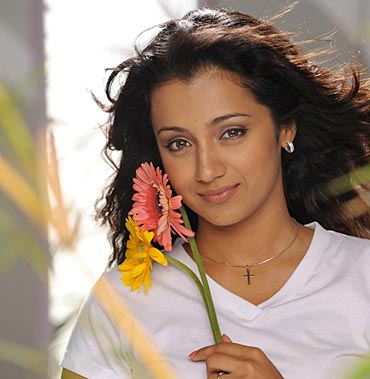 A definite plus was Oscar winning composer A R Rahman's musical score, his first in Tamil after winning the Oscars.

Made on a budget of Rs 14 crore, the movie brought in Rs 18 crore, resulting in a respectable profit. 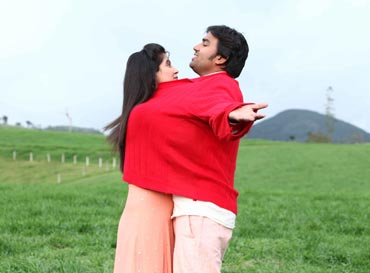 Image: A scene from Tamizh Padam

Tamil's first ever full-length spoof was an achievement, whichever way you look at it.

Directed by ad-maker C S Amudhan, the movie was an unabashed, tongue-in-cheek look at all of Tamil cinema's tried and trusted cliches, actors and sentiments in rip-roaring fashion.

Of course, it's an accepted fact that Tamizh Padam's success was directly tied to who its producers were.

Kannan's music, filled with gibberish were a laugh riot and though the movie's release coincided with Venkat Prabhu's Goa, Tamizh Padam, made on a shoestring budget of Rs 2.5 crore, had the makers laughing all the way to the bank with a return of Rs 8 crore. 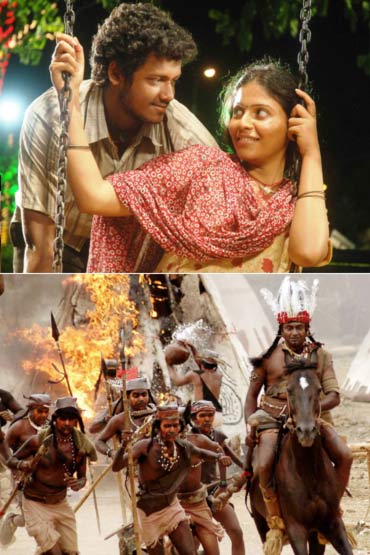 While Ayngaran Movies' Angadi Theru is a stark, naked look at the pitiful lives of workers in Chennai's fashionable clothes stores, AGS Entertainment's IKMS is a half spoof, half homage to the cowboy stories of the Wild Wild West that thrilled generations.

The only similarity, perhaps, lies in the directors -- G Vasanthabalan and Chimu Deven -- both of whom are director Shankar's erstwhile assistants.

Angadi Theru scored with its excellent screenplay, showing the triumph of human spirit under terrible conditions; its heroine, Anjali has been credited with a wonderful performance.

IKMS, in the mean time, produced moderate laughs with its array of comic characters, a story that brought in everything from treasure hunts to Indiana Jones.

Both are still drawing a steady crowd, and though they will never quite be blockbusters, it's expected that they turn out to be average grossers.