Are you ready to be Bengaloored? 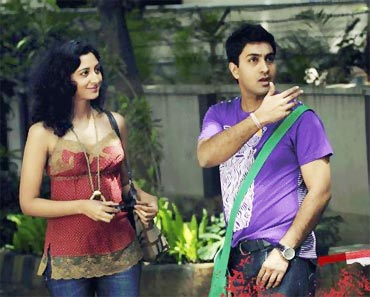 Image: A scene from Bengaloored
Shruti Indira Lakshminarayana in Bangalore

They say that the only thing permanent is change. Of course, the city of Bangalore is no exception to this rule, and director Swaroop Kanchi bases his English film, Bengaloored on this philosophy.

"It is not just the name of the city that has undergone a change (from Bangalore to Bengaluru), but the entire attitude of the people living here; and this I've captured in my film," says Swaroop.

While the film breezes through infrastructure woes, the changing outlook of people in this growing city is the main focus.

"For instance, in the past, we really bonded with our neighbours. But today sadly most people don't even know who their neighbours are. Forget neighbours, we don't even find the need to or have the time to connect with our own families," he observes.

These changes are reflected through the experiences of Babruvahana, the lead character, played by Harish Raj, who proved his mettle in Kalakar. In this film, he is a writer who returns from France to a totally changed Bangalore.

Given that Swaroop returned to Bangalore after staying in Hong Kong and Los Angeles, the changes he experienced on his return to the city have also gone into sketching the character of Babruvahana.

"My character returns to Bangalore to retrace his roots and finish a book he is writing. Given that it is his hometown, he feels that he will be able to find a befitting ending to his story in this city itself. On his return, however he finds that city and its people have changed completely. Even his idol, a poet, also has changed so much so that he discourages Babruvahana from continuing writing! These changes lead to turmoil within him," says Harish.

And him being a Bangalore huduga (boy), does he appreciate the changes the city has undergone?

"If you mean infrastructure problems, pollution and population, well most cities are plagued with these issues. There have been days when I have walked from my home in Vasanthnagar to St Joseph's college through Cubbon Park. I used to even cycle around the city. Those were the days.

"But while that may be difficult now-a-days, I feel Bangalore has changed for the better. In fact there is nothing that would make me leave the city. This is why I didn't move to other industries even when people suggested that I would get better opportunities there. It's been a struggle for me here, but things have started to look up," he says.

Are you ready to be Bengaloored? Image: A scene from Bengaloored

Harish hopes for a big leap with this film.

"I have done Tamil, Malayalam and even a Hindi serial and a film called Ek Alag Mausam. Bengaloored, being an English film, gave me a very cosmopolitan experience," he adds.

Meghana who plays his heroine is also looking forward to the film. "I play Radha, on whom Babruvahana has a longtime crush. He feels that I am the only one who hasn't change and represent stability, but only to later find out that there are changes even in me. My character is that of a working woman," she adds.

Incidentally Meghana, who had shifted to USA with her parents as a child, returned to Bangalore to pursue her acting career.

Popular theatre artiste Lakshmi Chandrashekar plays a short but powerful role in the film. She plays the ex-girlfriend of Babruvahana's idol. Srinivas Prabhu has also acted in the film while the director also plays the role of a Godman.

Music is by Vasu Dixit's Swarathma. There are six songs, including five Hindi and one Kannada montage song.

The film is one hour and forty five minutes long. The team is planning a phased worldwide release on July 2.