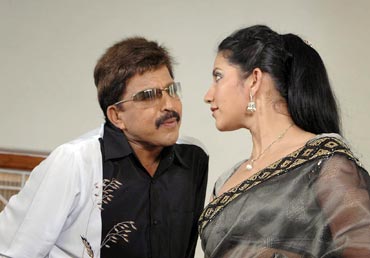 Image: A scene from Aptharakshaka
Shruti Indira Lakshminarayana in Bangalore

Six months and 61 films down, the Kannada film industry has just one runaway hit to its credit. Even bigwigs like Shivarajkumar have not had a good start.

With Ullasa Uthsaha fizzling out, Ganesh is also yet to strike 'gold' this year. 'Duniya' Vijay's Shankar IPS failed to make an impact at the box office too.

Ramesh Arvind has had three releases as lead hero so far and none of them have been a clincher. Ravichandran's Hoo that celebrated friendship also failed to create the desired impact.

The industry also came out with offbeat films such as Ijjodu, Mukhaputa and Vimukthi.

So how did the industry fare overall in the past six months? Let's find out.

Even as today's superstars are struggling to make a mark, yesteryear superstar Vishnuvardhan's last and 200th film Aptharakshaka hit the box office jackpot. However Vishnu's other release School Master bombed.

Aptharakshaka directed by P Vasu, has crossed the hundred day mark. The fact that it was Vishnu's last film came as a bonus, no doubt but it was the storyline, acting prowess of the artists and the graphics used in the film that got people to the theatres.

The film, which had an original script, was reportedly made on an astronomical budget. The film was a sequel to Apthamitra that starred actress Soundarya, who passed away following the film's release.

The narration technique and performances of Vishnu, Komal, Vimala Raman, Sandhya, danseuse Lakshmi Goplaswamy and Bhavana were the highlights. Music however was better in Apthamitra. Aptharakshaka is now being remade in Telugu with Venkatesh in the lead. 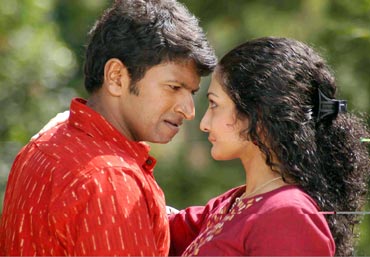 Image: A scene from Prithvi

One actor who received critical acclaim for his performance was Puneet Rajkumar. His role as an uncompromising District Commissioner who takes on the influential mining lobby in Prithvi was well appreciated.

Director Jacob Verghese's technical brilliance was another highpoint of the film. There were the songs and the power packed fights, but this was not good enough for Puneet fans who were accustomed to his commercial ventures.

Actress and singer Shruti Hassan lent her voice for the movie. Parvathi Menon was the leading lady, however she had very little to do.

Prithvi ran for over 50 days and the distribution rights of the film were said to be sold prior to the release itself for around Rs eight crore. 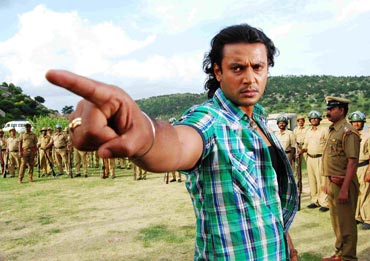 Image: A scene from Porki

The first half of the year saw several remakes including Porki. While the Telugu original Pokiri was a blockbuster, the Kannada version starring Darshan and Pranita failed to create the same magic.

It's collections were average and the film ran for 100 days in B and C centres only. M D Shridhar directed Porki was Darshan's first release of the year. It is said that around Rs seven crore was spent on the film. 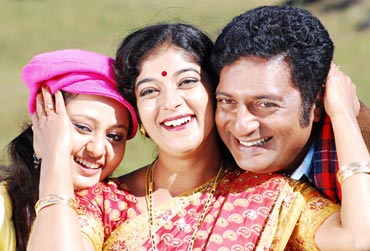 Nannu Nanna Kanasu was among the most awaited releases. The film despite being a remake had generated a lot of curiosity as National Award winning actor Prakash Raj was debuting as a director with this film.

While Prakash, who also acted in the film, came out with a stellar performance, somehow Nannu Nanna Kanasu paled in comparison with Abhiyum Nannum.

Amoolya played Prakash's daughter in the film. The film spoke of a friend-philosopher-guide relationship between a father and a daughter.

The film also marked the comeback of actress Sithara into Kannada films after a gap of 11 years. The film opened well and is doing average business in urban centers. 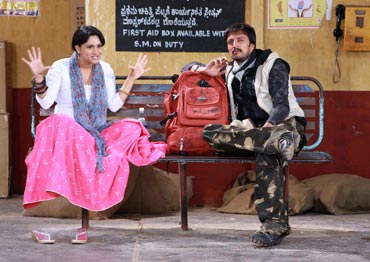 Sudeep's directorial venture Just Math Mathalli, was backed by a different narration technique, beautiful visuals, melodious compositions by Raghu Dixit and spirited performances by Ramya, Rajesh and himself no doubt.

But the film's collection was average. The film appealed more to the urban audience. 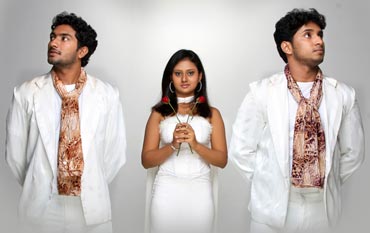 Image: A scene from Premism

Director Ratnaja returned to the big screen this year with Premism. The film told the story of two childhood rivals who fall for the same girl. The film was a make-over for Amoolya not only in terms of looks but also acting.

Newbies Varun and Chetan were also good. Songs by Hamsalekha were hummable. The film came with a very youthful feel. Premism's drawback was however it's length.

Given that the film's budget was not very high as it starred relative newcomers, it did reasonable business. It ran for over 25 days.