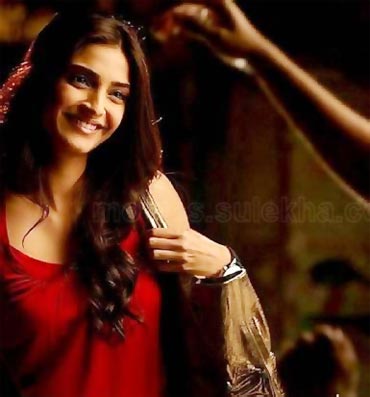 She may have had only two releases in her two-and-half-year-long career, but actress Sonam Kapoor is not perturbed about being left behind in the Bollywood rat race.

The 25-year-old daughter of veteran actor Anil Kapoor says that even though her third film I hate Luv Storys opposite Imran Khan, is an important film for her, she is not nervous or tense about it's box office performance.

"I can't be nervous. I believe in living life each day as it comes. My job as an actor is over after the shooting is complete," Sonam told PTI.

The actress says she is choosy in her personal life and doubly so when it comes to films.

"I believe in quality and I want to pace myself in such a manner that I don't feel saturated," Sonam said. "I don't want to earn that much money anyway," she added.

'I have got my father's experience behind me' 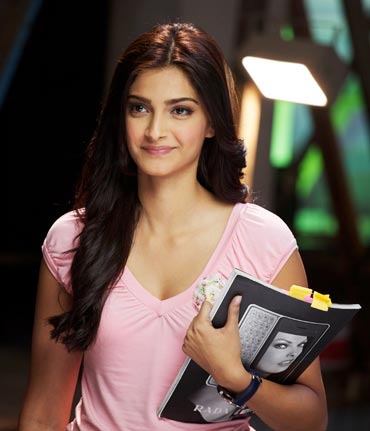 Sonam said IHLS is a small budget film compared to Saawariya and Delhi-6.

"I feel it is the budgets that fail not the films. Even though Saawariya broke even, the situation would have been different, if it was made at Rs 15 crore less," she felt.

Sonam said that she knows the advantages of being a star daughter and has no qualms of being in her famous father's shadow.

"I have got my father's experience behind me. I don't have to talk to people directly. They just go to my dad to discuss money and dates. He has too much respect and good reputation in the industry and I get work. But at the end of it, it is all destiny. Today's leading actors Shah Rukh Khan, Priyanka Chopra, Katrina Kaif are all outsiders," she said.

Sonam does not see any chance of her sharing screen space with her father in the near future.

"We have not found good roles for us to play father and daughter. Besides, he does not need to play dad on screen unless there is a very good role of a father. He is working with actresses of my age," she said. 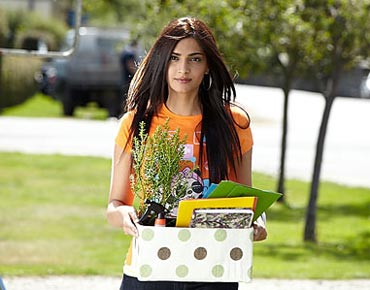 "I understand the idealism and romance in her life," Sonam said.

"Bittu in Delhi 6 and Sakina in Saawariya are totally different. Bittu is a contemporary girl in a conservative family. Aisha in my forthcoming film is an upper middle class outgoing girl while Simran in IHLS is middle class and the perfect girl. Simran thinks only about getting married while Aisha does not want to get married," she said describing the characters she has played so far.

Sonam said her forthcoming film Aisha opposite Abhay Deol was meant for her.

"It was too much of a coincidence as to how I signed the film. I am a Jane Austen fan and always wanted to play Emma as I felt it was a challenging role," she said.