Ramesh Arvind is back! 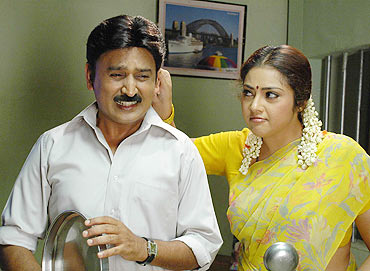 The film brings to fore the life of a middle class man who is burdened by the demands of his wife. "I play a common man whose world revolves around his wife and two children. I'm also someone who abides by my principles. But there arises a situation where I'll land up compromising these very principles for my wife's sake," says Ramesh.

According to the actor, this film is high on family drama but is sugar coated with humour. "It has to be when there are actors like Rangayana Raghu and Sadhu kokhila in the film. They play my neighbours and wait for an opportunity to add fuel to the fire!," adds Ramesh.

The actor will be seen playing a "high-pitched" role. "Off late I haven't played a short tempered character and this role comes as a change," he says.

Meena, whose last Kannada film was Swatimuthu, stars opposite Ramesh. "I have worked with her in two Tamil films and I feel there could not have been a better choice. First she is a good actress and second she carries this family image well. Our jugalbandhi scenes --- as in the ones we argue in --- are sure to entertain people," says Ramesh.

This is Meena's first film after her marriage. Meanwhile the actress has decided to shift base to Bangalore.

Ramesh Arvind is back! 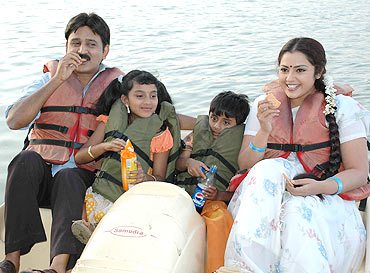 Sadhu Kokila is the music director of Hendthira Darbar. Ambika Soni, will be essaying the role Kovia Saral played in the original. Producer G Ramachandra also has a small role.

Hendthira Darbar stresses the importance of budgeting. "It also shows how farsighted women are and how they think from various angles while we men look at things from a single view point. The film is like a peep into our own homes and everyone is sure to relate to it. Even I realised how we men always feel that we have had our way only to realise later that it is our wives who have had the last say! But in my case I have had no qualms as the consequences have always been good," signs off Ramesh, who is planning to watch the film with his family.