Sign in  |  Create a Rediffmail account
Rediff.com  » Movies » 'I never thought I would cast Abhay in Road, Movie' 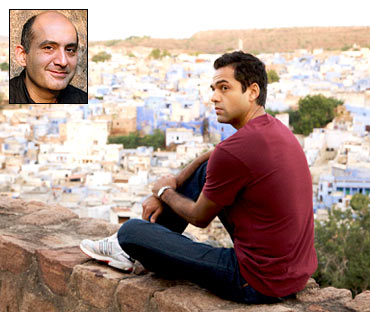 Director Dev Benegal has spent long years in the Hindi film industry but has very few movies to his credit. Nephew of Shyam Benegal, Dev's first film English, August won a lot of rave reviews, and picked up a National Award for Best Film as well.

Road, Movie will open in India on March 5. Benegal tells Patcy N what to expect.

How did you get the idea of making a film on travelling cinema?

At heart, I am like any other kid, who wants to escape. This movie is about escaping. Besides, all of us go to the movies to escape.

As a child, my parents would take us out on holidays that involved long drives. I love going for long drives, listenning to music, even now. So, I brought together the two worlds -- watching movies and being on the road. This escaping is what the younger generation wants to do. They are looking for different avenues to break free.

Do you think people still watch movies on large white cloths with projectors?

What is amazing about travelling cinema is that it is a modern day phenomena -- it is not something that happened 20 years ago. Seventy percent of Indians watch movies in the open air through the projectors. That figure was given to me by my distributor friend Shravan Shroff, when I first got the idea to make this film. I was stunned to hear that and I suddenly realised that people travel for hours and get together, just to sit in front of a gigantic screen and completely lose themselves. The idea blew me away, so I locked myself in a room and wrote the story. 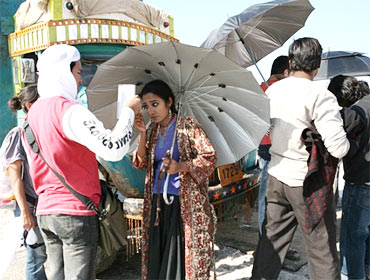 Image: On the sets of Road, Movie

How was it shooting in Rajasthan?

I had a burning desire to make a film in Kutch and Rajasthan, two of the most gorgeous parts of India.  But earlier, I did not what film to make there.

So I was told to visit in August as the climate would be pleasant just after the rains and not many tourists would be there. But when we reached there, the weather was 49 degrees. Sometimes, it would be 52 degrees! On certain days, it would get so hot the camera would melt.

Once there was an electrical storm. So everyday, we faced a new difficulty.

In the process, we became one big family and got close to everyone in the team.

Road, Movie has become very popular in all the international film festivals it has gone to even though it is a Hindi film.

That's what is amazing about this film -- there is not one English word in the film. There are no European or American characters in it. Yet, people love it.

It does not have the the kind of formula or masala that you should put in your film to make it appealing to a global audience. I wanted the film to be very specific and local. So it is shocking that people from Japan and North America have seen it and have connected with it.

'Abhay was exactly the kind of person I was looking for' 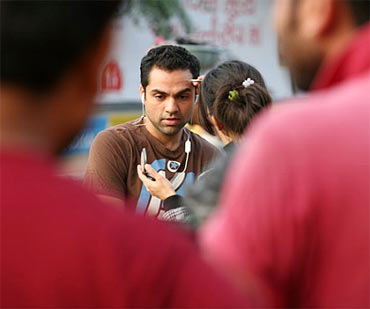 Image: On the sets of Road, Movie

What made you cast Abhay Deol?

I met Abhay in New York. He was exactly the kind of person I was looking for. I never thought I would cast Abhay; I did not write the film with him in mind.

But I knew the kind of person I was looking for, in terms of physique and looks. So when we met, it was a good meeting. Then I saw his film Manorama Six Feet Under. After that, I finalised him.

What about Tannishtha Chatterjee?

I have known Tannishtha for a long time now. She used to sing in a band before. There is a stirring moment in the film, and I wanted her to sing there. That has touched people. It's one of the stunning bits in the film.

What was really amazing was that Tannishtha sung the song live for us. You don't see this in India films any more. In the 1950s, people would sing live with an orchestra. When the mixing engineer heard Tannishtha, he said he did not require a studio version of the song. 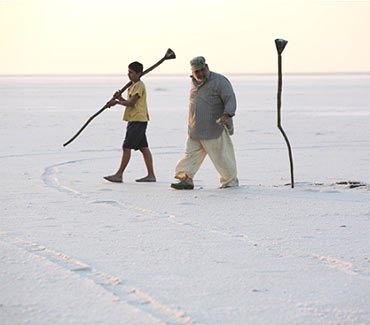 Image: A scene from Road, Movie

What made you rope in Satish Kaushik?

Satish Kaushik is an amazing story which needs to be told and retold.

I was working on Mandi, as an assistant. My job was to give actors their dialogues. I had to work with Satyadev Dubey. Nobody wanted to work with him because they were terrified of the guy. I didn't even know who he was at the time. Later, of course, we became good friends. The way I deal with my characters and actors on screen comes from having spent time with and learning from Satyadev Dubey.

One of the actors who had a tiny role in the film was Satish Kaushik. He had a one-line dialogue in the film. I told him that if he had a problem with that line, I would ask Satyadev Dubey to change it. But Satish took that paper and read that one line so well that I thought he was an amazing actor.

But he had only one line in the movie. So I told him that some day, when I would make a film, I would cast him. He smiled and said okay.

Then he became a successful Bollywood director. I would run into him and tell him that he may be a top Bollywood director but for me, he was a very good actor. So 20 years later, when I wrote the script, the first name that came to my mind was his. He read the script and was on. 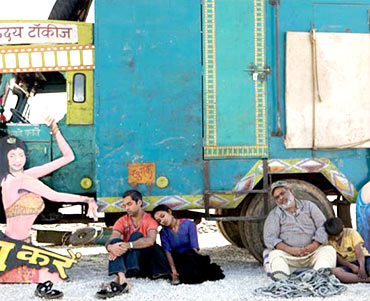 Image: A scene from Road, Movie

Why did you remix the song Sar Jo Tera Chakraye?

Sar Jo Tera Chakraye song is from Guru Dutt's film, Pyaasa. Since the Benegals and the Dutts are related, the song has been in my head since childhood. I love the spirit of the song, its humour, its picturisation and lyrics. It was pathbreaking when it was made, in terms of sound. I've always wanted to have that song in one of my films because it celebrated life and was about fun. It looked at the brighter side of life.

When I wrote Vishnu's character, and his father, who makes and sells hair oil, I wrote about how Vishnu wanted to explore life and wanted to run away from his father's business. The minute I finished writing it, the song Sar Jo Tera Chakraye came to my mind. That's why we featured it in the film.

But I thought that we should interpret it in a new way. It's not a remix, I hate that word. I hope the song is exciting.