Akon gets a taste of Mumbai, SRK-style 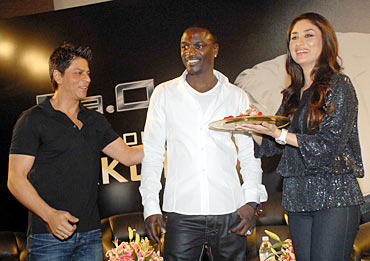 Singer Akon got a traditional Indian welcome from Shah Rukh Khan and Kareena Kapoor during a press meet in Mumbai on Tuesday.

The Smack That singer is on a three-day visit to Mumbai to compose and record a song for Shah Rukh's latest movie Ra. One with composer duo Vishal-Shekar.

The movie is being directed by Anubhav Sinha. In fact, it was Sinha's idea to rope in Akon for the film, whose title sounds similar to that of Mani Ratnam's film Raavan starring Abhishek Bachchan and his wife Aishwarya.

When asked about this, Shah Rukh said both the films are extremely different. "Raavan is a modern version of a mythology while ours is a superhero film," he added.

Shah Rukh did not wanted to discuss the movie as it is in the initial stages. But he did add that, 'It is a genre that has not been tried before. Red Chillies and my team would like to try and I hope we succeed. I am doing this film for my kids and if you guys have kids, they will like it too," he said. 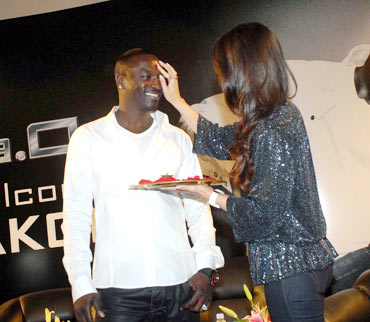 Speaking about his character in the film, Shah Rukh said, "I play a superhero Jeevan who has the ability to solidify electricity.

"We are working around the concept and hopefully visually too it will be understandable and look good. Since it is a super hero film I am going to fly. I am also going to wear a body suit," he further revealed.

When Akon was asked whether he has seen any of Kareena or Shah Rukh's works Akon replied, "I am aware of Shah Rukh's work but I am meeting Kareena for the first time today.

"Shah Rukh is a great friend and he always wanted me to be part of a movie. We were waiting for the right moment to connect and make it happen," he said of his part in Ra.One.

Shah Rukh first met the singer in New York. "His team and family were very gracious to me," the actor recalled. "I am a big fan," he added.

'We would love him to do all the songs' 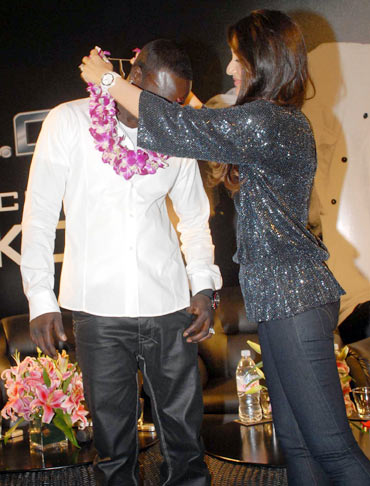 Asked if Akon will sing for Shah Rukh' IPL team, Kolkata Knight Riders, Shah Rukh replied, "Right now Akon will be recording for Ra.One. We would love him to do all the songs even the one Kareena is supposed to sing in the film [laughs].

He added, "we have not made a song for KKR yet but when we do I will obviously request him to sing,"

'India will be my next big focus' 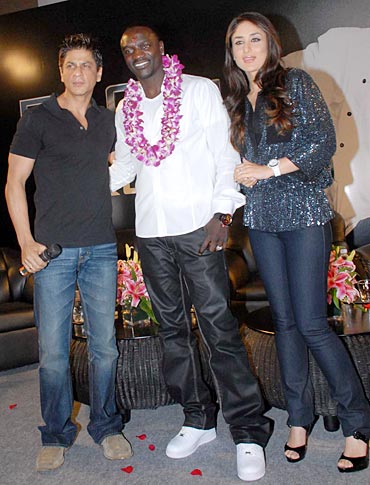 Akon has also worked with A R Rahman on the album Freedom is Beautiful.

Asked whether he plans to work with other artists too, Akon replied, "I have worked extensively in America and after America, India will be my next big focus because I have got so much support here. Soon you will see me working with other groups too. I am planning a world tour and hopefully we will have a number of shows in India.

"For Ra.One, I will be composing and singing a song. I will also appear in it. I want to give Shah Rukh different versions of the same song to choose from," he added.

Shah Rukh was apparently planning a special screening of My Name is Khan for Akon but since the singer is busy with the recordings, he decided to gift him a DVD of the film instead.

'I have never done anything original' 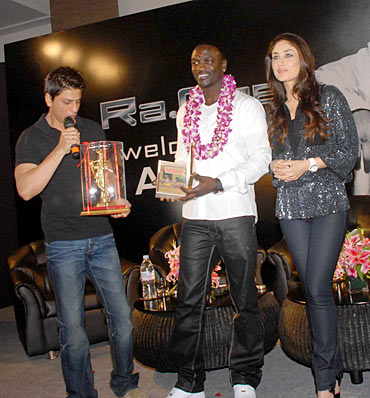 Asked if Shah Rukh is following Akshay Kumar's lead in getting international singers to sing for his films, a rather miffed-looking Shah Rukh sarcastically replied, 'I am just a follower of every star. I have never done anything original."

Kareena also interacted with the media. Asked why she's not on Twitter, Kareena replied, "I haven't decided yet but I have been toying with the idea and I hope to join the in a month or so."