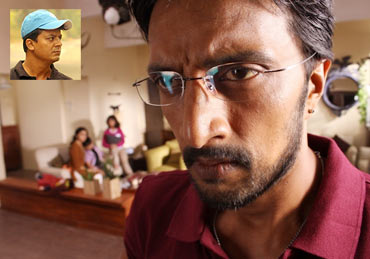 Image: A scene from Phoonk 2
Nithya Ramani in Mumbai

How surprised would you be to find an engineer and an MBA in marketing had quit his job and turned into a filmmaker to direct a horror movie?

Well, that is Milind Gadagkar (inset) for you. Milind has always been interested in films specifically Ram Gopal Varma's horror films right from childhood. He moved to Mumbai and, after a brief struggle, managed to get RGV's number, meet him and assist him in Phoonk.

RGV wanted a sequel and Milind, along with other assistant directors, wrote down their ideas for Phoonk 2. RGV liked Milind's draft the best and suggested that he direct it himself. The rest, as they say, is history.

Nithya Ramani caught up with the director and quizzed him about the film, his fetish for horror films and his encounter with a ghost while shooting the film. Excerpts:

How did an engineer and an MBA graduate turn to film direction?

I have always wanted to direct films. I did try my hand at a regular job, but realised that film direction was my calling. When the realisation sunk in, I quit my job and tried getting in touch with RGV.

I love his kind of horror films. It took me some time, but I was persistent and he finally agreed to meet me. He was making Phoonk then, so I assisted him. Then I wrote Phoonk 2.

Why wouldn't I want to work with the director who made Rangeela?' 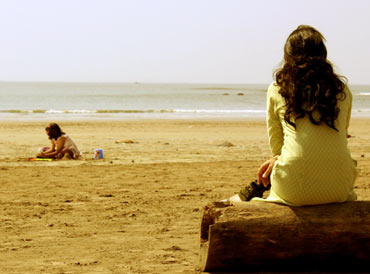 Why did you want to make a sequel and not an original? Did you have any apprehensions?

I wanted to take the film forward and that is possible only with a sequel. RGV was planning one and when I wrote the script, he suggested that I direct it myself. I had no apprehensions whatsoever.

How does Phoonk 2 take the story forward?

Sudeep is in the construction business and moves into a new home. The woman who died in the first film returns as a ghost and terrorises them. What Sudeep does to save his family forms the core of Phoonk 2.

Why did you want to assist only RGV? He has had a record of not-so-great films lately.

Why wouldn't I want to work with the director who made Rangeela, Company, Satya and Bhoot? Hits and flops come and go, but that doesn't reduce his talent.

How was the experience of working with RGV during Phoonk and its sequel?

He was shooting Rakta Charitra in Hyderabad while I was making Phoonk 2. So, he wasn't on the sets, but I learnt a lot while I worked with him in Phoonk.

He is a very humourous person. What I like best about him is that he is well read. He is very intelligent and has knowledge about many things. By just working with you, he gives you the confidence to take up challenges.

'It is quite a task to manage everything, but I did' 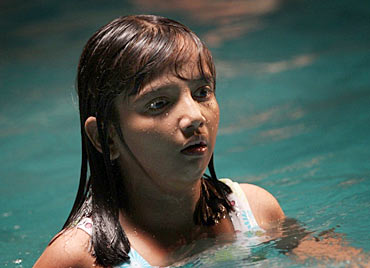 RGV wasn't there while you were shooting Phoonk 2. Didn't you need help from him?

Whatever help, motivation and inspiration I needed was all there before we started shooting. I learnt a lot from him while assisting him.

What did you learn?

RGV is not the type who will sit with you and teach you. The very experience of working with him makes you learn a lot. The way he works, the precision with which he shoots is inspiring. Whatever I know I have learnt from him.

How was your first day of Phoonk 2? Since RGV wasn't there, weren't you nervous?

I wasn't nervous. Everybody wanted to see what I was capable of. But I didn't let anything go wrong. Especially because RGV wasn't there, I didn't want to give anybody an opportunity to find something wrong. It is quite a task to manage everything, but I did.

'I haven't seen ghosts, so I don't believe in them' 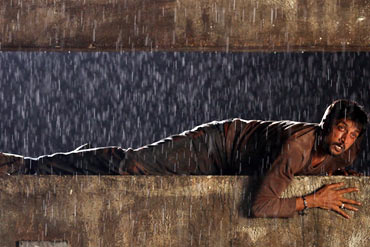 Any childhood experiences that got you interested in this genre?

Since I come from an army background, I have traveled a lot. I was an adventurous kid and would always explore the area around my new homes. Also, I have always loved horror films. The fact that it makes you jump off your seat, sends a chill down your spine and catches you off guard is interesting.

Do you believe in ghosts? Have you seen any?

I haven't seen one, so I don't believe in them. It is just imagination and that is the best part of it. I think the mind is programmed in a certain way and fear comes in when something takes you off guard.

But I always wanted to know if ghosts existed or not, which is why while shooting I decided to experiment. We were shooting at Madh Island, Mumbai, and the crew members said there were rumours of the ghost of a woman who had died in an accident standing in the middle a bridge every night.

I decided to go and find out if it's true. One night after pack up, two crew members and I drove to the bridge. We parked a few yards away from where she was reportedly spotted. I got off the car and went closer, but nothing happened. I believed the story only because one of my light men said he saw the lady. As for me, I experienced nothing.

'I want to make war films and love stories too' 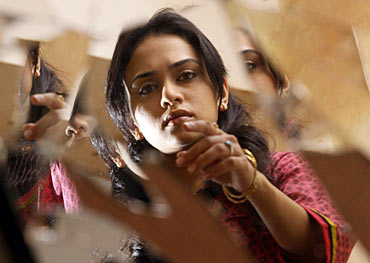 How did your family react to your decision to quit your job and take up direction?

They knew that I would do what I wanted to. Though they didn't know anything about this world, my parents and wife were supportive. They allowed me to take the risk. I hope everybody likes the film.

So, what kind of films do you want to make after this? Do you want to stick to horror or try other genres as well?

I would love to make war films. Horror is, of ocurse, my favourite, but I would also like to do love stories. I will continue to do my best and entertain people with my films.