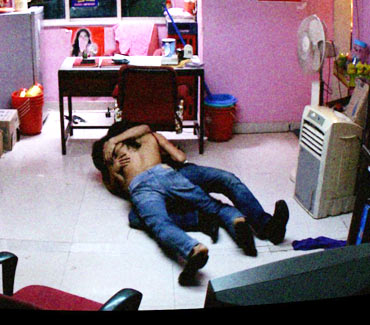 Dibakar Banerjee loves to pull the rug from under us.

He did it in Khosla Ka Ghosla and yet again in Oye Lucky Lucky Oye. And now the unconventional director is back again with the provacatively titled, Love Sex Aur Dhokha slated for March 19.

The movie deals with love, sex and betrayal in small towns in India shown through handycams, hidden cameras, CCTVs and mobile cameras. Given the bold subject matter and scintillating promos showing lots of nudity, it's not surprising that the movie is generating a lot of buzz.

From Khosla Ka Ghosla to Oye Lucky Lucky Oye and now to Love Sex Aur Dhokha. You seem to love experimenting with films. Why such a shift?

I ask myself, what is it that makes us consume these things about someone else's life without knowing that person. This thought intrigues me.

These two things are the reason why I am making Love Sex Aur Dhokha.

Why such an intriguing and thought provoking title?

I am glad you said thought provoking [laughs]. I don't know.

The film has three stories about love, sex and betrayal. I think, the way we look at love and sex is completely defined by our Bollywood films, television serials and ads.

If you don't think about sex as just a reproduction function, then it becomes a form of expressing love for someone special. But the way we love and express it is totally influenced by someone else's idea of love.

'When I made Khosla Ka Ghosla, I was hardly aware that it would turn out to be a hit' 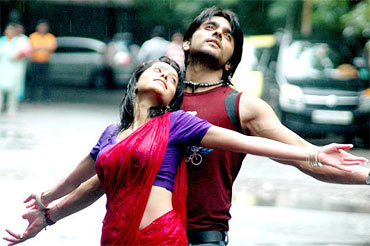 Your films are very unconventional...

I only made what I wanted to. I was just an innocent babe in the world of filmmaking.

When I made Khosla Ka Ghosla, I was hardly aware that it would turn out to be a hit. Same with Oye Lucky.

Predictable filmmaking doesn't interest me. I get bored easily. The subject and treatment have to be new and only then will it interest me.

Ekta Kapoor is the producer of the film. Why her?

I believe we must take the producer in tandem with the film. ALT Entertainment [Ekta's company] met me and my company, Freshwater Films with an idea of making a film. I narrated a few stories to ALT entertainment. They then chose this script. I then narrated it to Ekta who loved it.

'No one has made a film like this before' 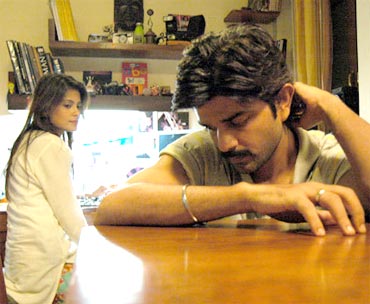 Who's your target audience?

The youth who are possibly the early adopters of anything new. This kind of film, with its treatment and subject matter, has to find the right audience. They have to be told what to expect even before coming to the theatre or else they will be shocked. We are giving them a choice. They can always stay away.

The film has generated a lot of buzz -- most of it negative -- from the censor board cutting a huge chunk of the film to leaked videos set to titillate...

Today's journalism's definition is that if you can't inform then mis-inform. No one has made a film like this before.

The initial promo of the film was the accurate description of the film. If we want a U/A certificate then we have to delete some scenes. To cater to the larger audience we had to make changes in accordance with the Censor Board's instructions.

'The pictures and videos are not meant to titillate'

Some of the promos show full nudity.

As I said earlier, LSD has three stories. One is shown through the lenses of a student filmmaker who falls for his heroine. The second is a love story seen through the close circuit camera in a shop. The third story is about a sting operation to expose India's biggest star in a casting couch scandal.

Why have you chosen newcomers?

Imagine if I had taken known faces. The illusion of hyper-reality would have broken at the first instance. Now when you watch the film, you don't know if the film is made by Dibakar Banerjee or a compilation of clips taken from the cameras of the three individuals. We want people to realise that there is a thin line between reality and hyper-reality. Hence the new cast.

A political thriller. It is about an assassination plot in India and what happens later. We have just finished the script. We will start shooting later.