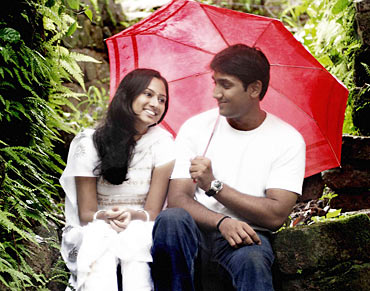 Two Kannada releases go head to head this Friday. They are 35/100... Just Pass and Nirdoshi.

After much delay, 35/100... Just Pass, which is directed by Deepak, is about college life.

"A group of friends, mostly software engineers have got together and made this film. For this project, we used the money we had saved up to buy ourselves houses. In the middle of the project we ran out of money. Then we encountered some technical problems. Since we are new to the industry and have done the post production work ourselves, it took us some time to understand and learn things. Also, the theatre profit sharing and rental issue broke out. So we waited for it to settle down," he justifies the delay.

But he feels that the wait was totally worth it. "I saw the first copy and was impressed with the quality. I have a feeling that the people will like it," says one of the lead actors, Vikram Joshi.

Deepak is also very confident about the film's success. "It's a simple story that captures the realities of college life. Even though at first sight it may look like a triangular love story, in the climax you'll realise that it's not. The team is also banking on the different narrative technique that they have used. Since we have two leading men, the story has been shown from two points of view. Two scenes in the film have been repeated. One is a fight sequence and the other a police station scene."

He continues, "When you watch it for the first time you'll feel Vikram is the hero, but when you watch these scenes again, you get the feeling Raghu is the right guy. So basically we are allowing the audience to choose their hero and villain," explains Deepak.

The film also carries the message that while we manage to succeed in one arena, we usually manage only 'just pass' results in other areas. The film narrates the story of people who have just passed in either love, examination or life itself. 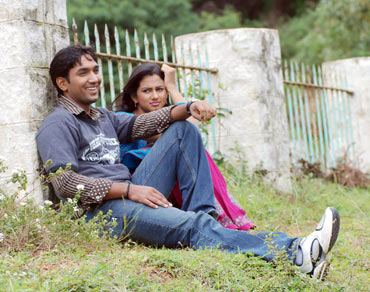 The film is without exaggeration according to Raghu, who was seen in a small role in Minchina Ota.

"Even college fights are very realistic. The hero fights only one or two people at a time and while he hits others, he also gets hit."

So was he the maara mari types in college?

"No way, I was a peaceful person," he laughs. He did manage to create a real effect though as he punched Vikram hard in the nose, fracturing it. "Vikram was such a sport. He went to a nearby hospital and returned to finish the shot," recalls Arjun. "It saved us from using artificial blood at least!" jokes Vikram.

The film also captures hostel life in an extensive manner.

"That's when I realised how messy the hostel mess food is!" says Vikram.

Summing up the film, he says that their depiction of colleges is not flashy.

Heroine and television anchor Shweta chips in, "Even my character is very relatable. You would have met someone like me in college. It was almost like playing the real me in the film".

All the actors are new to full-fledged acting and yet the director gives them high marks. 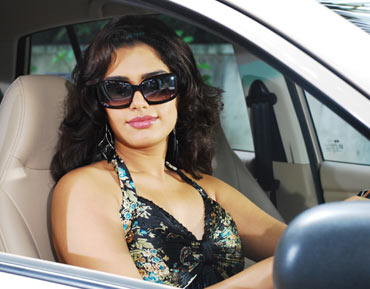 Giving competition to 35/100 is director Govardhan's Nirdoshi. Formerly titled Rasgoola, the film according to Govardhan is a "thrilling sci-fi."

The story is of a scientist who invents a medicine and the effect it has on him. The film also highlights the issue of global warming. Don't mess with nature, learn to live with it and protect it, is the film's message.

"The audience is bored of mother-son/brother-sister and love stories. This will come as a much needed change," says Govardhan.

The film also has a lot of skin show as one of the five heroines is a swimming coach. "She has worn bikini in the film and I don't know how the Kannada audience will receive it," he adds.

All the actors in the film are from Mumbai. When asked why, Govardhan says it is because Kannada girls would not be comfortable doing bold scenes in the movie.

"Also we were looking for someone with an eight pack to play the hero's role. Here heroes are still working towards four and six packs! Also Piyush is over six feet. I needed my leading man to have a good physique," he says.

Renowned Hindi actor Kulbushan Kharbanda has also acted in the film. Govardhan has done the music for the film as well. Some songs have been shot in Thailand.