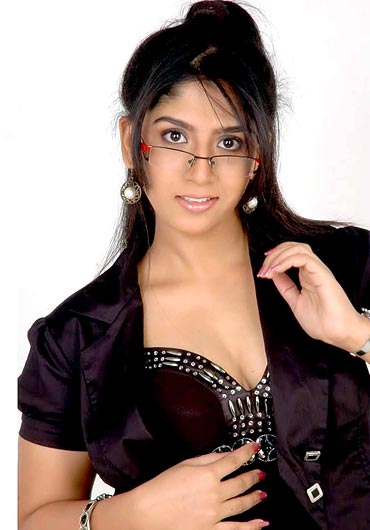 Treading the path of action heroines Malashree and Vijayashanti is latest entrant, Ayesha.

The Tirupathi-based lass will be seen flexing her muscles in Jayahe, a kannada film directed by famed action director Thriller Manju.

Ayesha, a black belt in Karate, has been training with her father Habib since she was a year old. She is today popularly known as 'Lady Bruce Lee.'  Manju chose Ayesha for the part after he recalled directing her in Shabda seven years ago. In that film too, Ayesha performed stunts.

Martial arts form a crucial part of Jayahe. The story revolves around a father-daughter relationship.

Manju too couldn't resist acting in the movie. He plays an advanced martial arts trainer, Dhrona.

"In my film, the girl goes to Bangkok in search of her kidnapped father. As the kidnappers are martial arts experts, the girl wants to learn advanced techniques to fight them. After hearing about my skills, she seeks training from me," he reveals.

As the trainer resides in Dubare forest, Coorg, the film has been extensively shot there. Parts of the film have been shot in Mangalore as well. 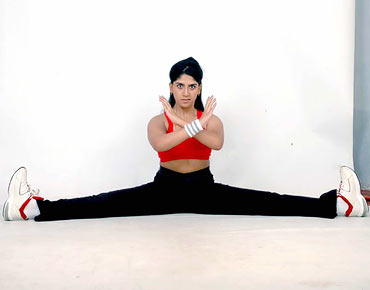 There are about eight fights and each is less than a minute and a half in duration.

"Ayesha has done a great job with each of them. I have directed Malashree and she is very good with stunts. Ayesha is also a pleasure to work with. There was this scene where her head and legs are two feet off the ground and I stand on her stomach, she was superb in that tough stunt."

Ayesha however says that it was a firing scene that gave her the creeps. "Action is something I'm up for 24x7. In fact I have not given even a single dupe shot in the film. But what really scared me was a sequence where bullets are fired by the police on one side and the villains on the other. I am supposed to be running amidst this chaos but I just blanked out once the camera started rolling. I stood there like a log and after a while, screamed for help."

The rest of the cast includes Avinash, who plays the father's character, Suryanarayana (the baddie in Veera Madakari) the main villain, Ravi Kumar, a new comer, who will also be essaying a negative role and Gowri Pandit and Akash who play cops.

There are five songs and Manju has written the lyrics for all the songs.Jayahe is his third film as a lyricist. The film is due for release in April. It will be remade in Hindi, Tamil and Telugu.