Sign in  |  Create a Rediffmail account
Rediff.com  » Movies » Anushka Sharma: I did not kiss to attract attention

Anushka Sharma: I did not kiss to attract attention 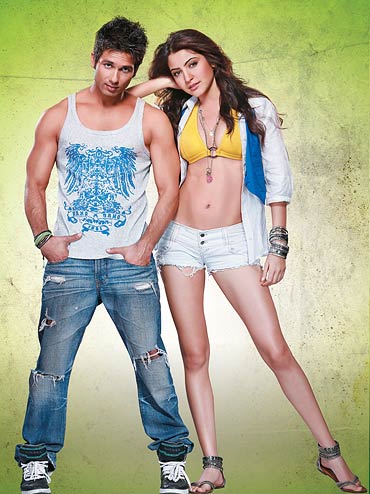 Image: A scene from Badmaash Company
Patcy N in Mumbai

Though the Yash Raj blockbuster was only her first film, the Bangalore beauty looked like a natural actor while starring opposite Shah Rukh Khan.

The film is directed by actor and first-time director Parmeet Sethi, and releases this Friday.

Patcy N spoke to Anushka about Badmaash Company, her future films and how she's adjusting to Bollywood and Mumbai.

Yes, apparently it has been inspired by real life stories.

Parmeet told us later on, that these four characters are people whom he knows in real life. I dared not ask him who they were.

Apart from the fact that all four characters Karan (Shahid), Bulbul (Anushka), Zing (Meiyang Chang) and Chandu (Vir Das) are extremely easy to relate to, they are from a middle-class family with dreams and aspirations. We all have been like that: We all dream.

It is a film about the relationships of these four friends and the trials they go through in achieving their dreams. It is about their journey, which is beautiful, interesting and different.

These four youngsters' dreams are really big, and they don't have patience. They are too young and can't wait to grow up and fulfil their dreams. They want to do it right away.

They are brilliant, so they achieve their dreams the wrong way.

'I am far too serious to take things lightly' 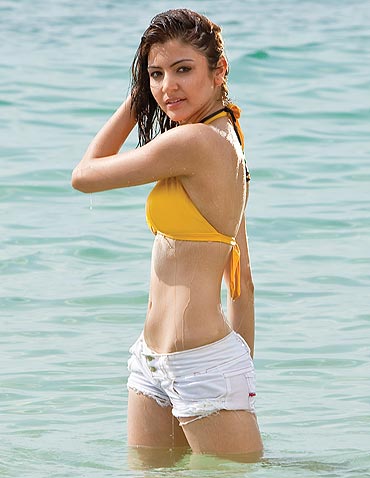 Badmaash Company is about the changes that come once the four friends find success. How has the success of your first film, Rab Ne Bana Di Jodi, changed you?

When you don't have to struggle in life and things come easy for you, you do not understand their value.

Plus, I am not from this Bollywood industry. I am no filmi kid. I don't even have filmi friends, so nobody gave me a manual and told me how the industry would be. I had to try it on my own, and I'm still learning.

I value what I do and what I'm given. When I got Rab Ne, I knew that it was no small deal. Aditya Chopra was putting so much trust in me and giving me a big opportunity, so I could not take it lightly. I am far too serious to take things lightly.

So now have you adjusted to the city? Do you understand Bollywood?

No, it will still take time. It cannot happen overnight. I am not trying to understand Bollywood, rather I am trying to make my own imagery of it, which is very important. Otherwise I will follow a set pattern. I want to make my own perception of Bollywood.

So far it has been very good. I think it is a very fair industry. Everybody gets what they deserve. If it does not show in the short run, it will show sometime in the future.

I think that the principles you come here with in the beginning are the principles that define your life in the end. Sometimes, in the middle, you may let go of your principles and your beliefs. That is your problem.

I have been very fortunate to work with very good people. I just choose the script, but the people that come with it, I can't decide. I have been lucky so far.

'I can't really compare between Aditya and Parmeet' 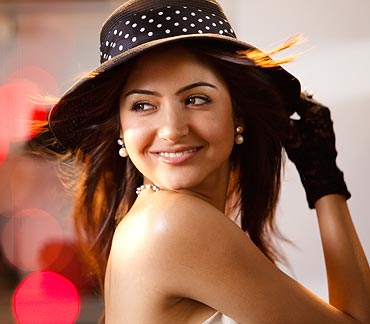 Shahid, Chang, Vir Das and you are all from the same age group. So how was your rapport with them on and off the sets?

I really got along with all three. We travelled so much to shoot for the film, and when you are outdoors you are mostly with your co-stars. If you are shooting in Mumbai, you go back home. But outdoors, the cast and crew are like your family.

So we hung out. We went out clubbing sometimes. We ate out. We all had fun and got along really well. To a certain extent, it was good for the film also, because we play four friends in the film.

When you were shooting in US, did someone come to you and ask if you were Anushka Sharma? Did you say no?

Yes, I did say I was not Anushka Sharma, as I wanted to shop and I did not want anyone to recognise me. But then I saw that boy's girlfriend scolding him and saying, "See, I told you that she is not Anushka!"

I felt bad for that poor boy. So I called him and clicked a snap with him.

You worked with Aditya Chopra, an experienced director, in your first film, and newcomer Parmeet Sethi in your second film. What is the difference?

I cannot yet realise the difference, since these are also my first films. So I can't really compare. Maybe after five films I'll be able to compare directors.

Everything about Adi was new to me; even his direction was new to me. I did not understand direction till my third film (Patiala House -- under production).

I saw Adi as my teacher, because he explained each and every thing, since it was my first film.

Parmeet is a wonderful director. He has written the script of this film, so he knows it better than anyone else, and therefore can enhance it very well into film.

He's also been really been committed to the film, so much so that I am sure he sees his characters in his dreams. You can see a strange kind of passion in him when he is working, which I think is very great.

'Everybody knows me as Tani' 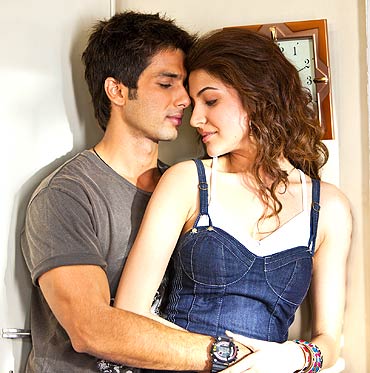 Did you get to improvise on your character when you were shooting?

Yes I did. Parmeet is very open to suggestions. Since he wrote the script, he knows exactly how these four characters are. I have immense faith in Parmeet.

How much did he push to get the actual Bulbul out of you?

He did not think I could be Bulbul till the time he met me, as he had seen me as Tani in Rab Ne Bana Di Jodi, who is the complete opposite of Bulbul. Everybody knows me as Tani, because that's the only movie that people have seen of me. But luckily Parmeet did not have to push me too hard, because I came on set very prepared. I did my homework right.

Did you have cold feet about the kissing scene in the film?

No. I don't see it as a kissing scene. It is a part of the film. I think cinema is changing. We are not doing things for the heck of it. We need not need to do things to attract attention; at least I would not do it.

I did it like an actor. If I have to do something because my character demands it, I will do it. If you see the chemistry between Karan and Bulbul, you will understand why these scenes are justified.

How Badmaash are you? Can you share one incident?

There are many, but I can tell you one that I hated. One period in school, in which we had to do home science-type activities, I would be so bored. I wanted to play basketball, so I would forged the signature of my Physical Training teacher and leave the class. I did that for two years, during the seventh and eighth standard. Then I got caught once, so I forged somebody else's signature to leave the class. My teacher knew all along that I was doing this. Plus, before I left school, I told her too.

What research did you do for your character Bulbul?

I did not do any research as such. I just studied girls who were closer to the character of Bulbul and pick up their mannerisms -- how they stand and walk.. 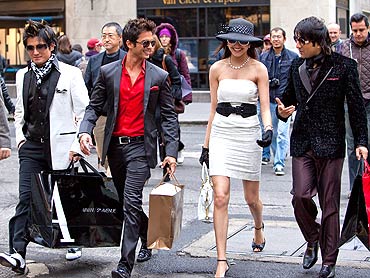 You have done three films with Yash Raj what is your third film with them?

It is not yet titled. It is a story of two people called Bittu and Shruti. I play Shruti. The film is based in Delhi University about two friends who set out to start their business.

What can you tell us about Patiala House?

Patiala House is about the repercussion of racial tensions on an entire family. It is based in South Hall, London. There was a time in London when there were racial riots, and Sikhs went through trying times. I play Simran, who is born and brought up in London. She's also lived in India for about ten years. It is a lovely, heart warming story. It is light and funny as well with a great star cast. I have already started shooting for it.

Tell us about working with your co-star Akshay Kumar on Patiala House.

I love working with Akshay. Actresses always say that Akshay is their favourite co-star, and I used to wonder why they would say that. But now I have experienced it, and it's because he's so professional! He is always on time, he is always on sets and he has zero tantrums. He is a very secure actor. He is so funny and always cracking jokes. You see the lighter side of life when you are with Akshay.

What are your plans for the future?

Some day, when I have lots of money, I would like to produce and host a travel and food show.