Sign in  |  Create a Rediffmail account
Rediff.com  » Movies » How an e-mail resulted in these rare film posters

How an e-mail resulted in these rare film posters Image: A cover of The Art of Bollywood
Maria Giovanna in New York

"How do you begin mapping a design history that extends over 80 years? Since very little had been written about the subject, I had to start from scratch."

This is how Rajesh Devraj sums up the project that has consumed most of the past five years of his life.

In 2005, a random e-mail between two friends, Rajesh Devraj and Edo Bouman, led to the development of a detailed proposal to the well-regarded German art book publisher, Taschen.

Right around the same time, the wife of Taschen editor Paul Duncan told her husband she thought they should do a Bollywood book.

The unsolicited proposal from Devraj and Bouman for a book examining the almost century-long history of the poster art of Hindi movies found its way to Duncan and got the green light to proceed.

Work over the next five years led to Taschen's April release of the sumptuous hardcover The Art of Bollywood. As with many Taschen publications, it is simultaneously releasing in English, French, German and Spanish editions.

Maria Giovanna writes about Hindi movies, old and new, on her blog Filmiholic.com Rajesh Devraj is the screenplay writer for The Fakir of Venice and Quick Gun Murugan, two recent films, Edo Bouman is the man behind Netherlands based Bombay-Connection Records and a collector of Hindi movie music and posters.

Paul Duncan, who is based in the UK, the last nine of which he has worked as editor at Taschen, grew up near several large Indian communities and recalled seeing posters for Sholay as he passed local cinemas on the way to school. 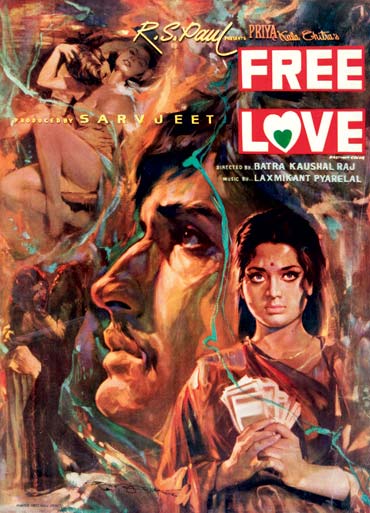 Image: A poster of Free Love

"At Taschen we like to include pop culture -- high brow and low brow -- and all the books that came before, they were treating it as art for art's sake. What we had here were collectors who could access the libraries but also knew other collectors and could access their collections. We had a beautiful situation where all these different posters were suddenly available to us, and things that we'd never seen published before."

For Devraj, what propelled him was a dissatisfaction with all that had come before on the subject. "I was intrigued by these images, but there was very little in print that described their evolution. The standard Bollywood book emphasises a canon of stars and important films, and the art itself is secondary. Academic studies of the film poster too tend to read the art narrowly in terms of national or cultural identity, or some such perspective. There wasn't much out there that dealt with the images themselves, no real design history."

While feeling agnostic as to the oft-trumpeted notion by Indian media that "the world is waking up to Bollywood movies", regardless Devraj says "I always thought that even if you weren't interested in Hindi movies, you'd enjoy looking at these images, because they're so wildly entertaining." The Art of Bollywood is visually rich, with great care taken to reproduce images from originals that were, by nature, fragile and intended to be short-lived, but in addition, the obvious care and curiosity for the subject matter have also contributed to a coffee table book that is also saturated with fascinating details and insights into the artists' work and the historical and cultural contexts of the times in which they were working.

Growing up with artists at the house Though not an artist himself, Devraj had always had a keen interest in graphic design and the visual arts when he was growing up in Jaipur, where his father ran an outdoor advertising service producing billboards, neon signs and so on.

"I've grown up with these images -- in fact, during my childhood, the billboard workshop was at the back of the house, and I'd often sit and watch the painters at work. They painted advertising images mainly -- Coca-Cola billboards and the like -- but sometimes movie images as well, because my father was also an occasional film distributor."

But something happened in the 1990s when Devraj was working for Channel [V] (an Asian music television channel owned by Rupert Murdoch).

"I did a lot of stuff that was based on Indian pop culture -- promos, design work, even a show on Indian B-movies. That's what led me to look at Indian movie images more closely. The turning point came when I saw some rare Art Deco images from the 1930s -- I realized that there was a history to this art which I didn't know at all. So, over the years, I looked at as many images as I could find, filling in the gaps in my knowledge."

The work at hand Image: A poster of Kavi Kalidas

Armed with his knowledge, enthusiasm and Taschen's commitment to the book, Devraj then had to go about actually doing the work. He began by looking at as many images as he could find, some 15,000 by his estimate.

"I looked through every slide in the National Film Archives collection, and also examined some 7,000 movie booklets in chronological order, which gave me valuable insights into the evolution of the art. I took extensive notes on my laptop through this process, and entered them all into a database, which helped me date suspect images, and also determine which trends and artists I wanted to follow in greater depth."

Devraj determined to limit his research to hand-painted posters, whose lifespan wound down in the 1980s. "We tried to track down as many artists as we could find, but obviously many weren't around. But we did get a lot of useful information from family members, colleagues and of course, the surviving artists."

For the early history, Devraj had no choice but to rely on written accounts.

While he found some information through old film magazines and trade directories, he says the most useful leads came from Marathi-language texts, which provided many first-hand accounts of the history."

In the original proposal, Devraj and Bouman had a less complex book in mind, but, says Devraj "Once we started digging in, it became apparent that there was a lot of research involved. Edo couldn't spend as much time in India as was required, so I landed up doing the bulk of it with research co-ordinator Anand Tharaney -- who did a great job tracking down people -- and writing the text by myself. Edo's contribution was very valuable - he offered his collection, sourced many images and provided detailed notes on all the drafts and the layout."

Recycling as an art form Image: A poster of Maya

Devraj explains a crucial point that is covered in detail in the book:  "One of the key problems in writing a history of Bollywood poster art is that images are continually recycled, and its very difficult to tell originals from reprints, re-release posters and regional variations. If you want to find your way through the maze, you really need to understand how the trade operates. That's why we also spoke to distributors, publicists, producers and printers, as well as regional artists and distributors based in Delhi, Kolkata and Chennai, to understand the processes behind Bollywood image-making."

One might wonder then, if one were to come across any old movie posters in an ancestral home or a bazaar, in the potential of finding something of value.

Devraj says "Hindi film posters do have a commercial value in the market today, some have been sold for very high prices in auctions. But I find that this value is rarely based on the quality of the image -- going by what sells in auctions over here, Indian collectors can't tell the difference between a shoddy offset reprint and an original litho from the '50s. I hope my book helps correct the situation."

Once various posters and cards were located, the logistics of getting them into suitable formats for printings required many hands on many different decks, from private collectors whose images were scanned at Comart, a well-known print reproduction house in Mumbai, to the National Film Archives of India giving permission to bring in a camera team to shoot images from their collection.

Edo Bouman handled the images that were sourced outside India, including some posters from a collector in Pakistan, which were scanned by Taschen in Germany. Image: A poster of Zehreela Insaan

And what of the sometimes controversial term Bollywood in the title?

When asked if he had any qualms about using it, or if he thought it was a necessary concession to attract a foreign audience, Devraj says "I'm neutral about the term. You can't deny that it's convenient -- there's no other catch-all term you can use for both commercial Hindi cinema, as well as the Hindi film industry."

Both bitter and sweet Image: A poster of Devta

A project of this scope and depth and duration is bound to include some pleasant surprises as well as some letdowns.

For Devraj, now that the book is in print and he considers the entire five-year process, he says "The biggest surprise was that I could uncover so much information in a relatively short span of time. I hadn't expected to find so much, so quickly -- in fact, there's a lot more that I had to leave out of the book because of constraints.

"There were quite a few disappointments of course -- so many images we couldn't track down, or include. We managed to track down the whereabouts of one artist with great difficulty, only to discover he's passed away a month earlier. If I'd initiated the project in the late 90s or even 2000, I would have been able to interview some of the great designers whose work I've been forced to describe through second-hand accounts."