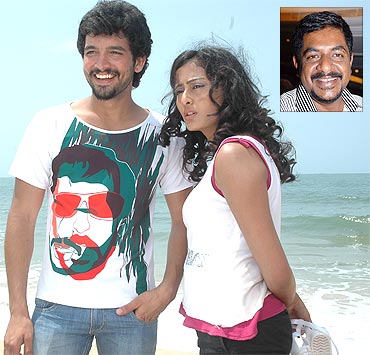 Image: A scene from Pancharangi with an inset of Yograj Bhat
Shruti Indira Lakshminarayana in Bangalore

The Kannada film Pancharangi was this year's most awaited releases.

Director Yograj Bhat says he is overwhelmed with the reactions to his first home production, which has crossed the 25-day mark. Shruti Indira Lakshminarayana finds out more. Excerpts:

Are you satisfied with the reactions that Pancharangi has generated?

Financially it had done good business. The response has also been positive from viewers. Particularly the way the song lifeu ishtene... has been received is phenomenal. I'm still getting congratulatory messages and calls.

But your critics say that the film is not much different from your previous projects and that it lacks a story...

When you make a film, there are bound to be bouquets and brickbats.

'A film's success is determined by the laughs, tears and claps it evokes...not by its budget!' Why do most of your films carry pessimistic overtones about life?

I want to make films on different aspects. Monotony bores me. I guess people are also tired of seeing the same things on screen. Why else would my films be a hit?

How do you react to another criticism that while you chose to make Pancharangi on a minimal budget as it was your home production, you go for big budgets when it comes to other producers?

Budgets should be based on the markets we are catering to. Mungaru Male, Gaalipata and Manasaare were filmed accordingly. Also with respect to a film, it is not budget that matters but quality. A film's success is determined by the laughs, tears and claps it evokes...not by its budget! 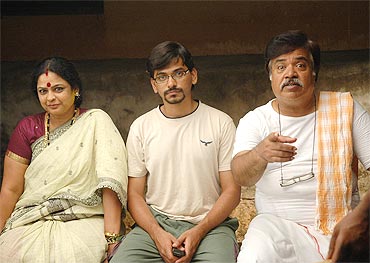 Why have you cast Diganth in most of your films?

It's just that his performances have made me happy. In three of my films, his performance was first class and with Pancharangi he scored a hundred. Henceforth it is up to his female fans to keep him going!

Music is among the selling points of Pancharangi. Do you think the audio launch of Puneet starrer Jackie during your film's release harmed the popularity of your songs?

Songs of both these films are chart busters. I have written all the songs in Jackie and if anything the popularity of my songs in Jackie only generated more interest in Pancharangi songs. The timing worked out well.

What has made you the highest paid and most popular lyricist?

My ability to connect with audiences across different age groups. I can write romantic songs on one side and naughty ones on the other. I can travel between the two extremes with ease. Also the fact that writing lyrics is not my profession makes me enjoy it more. I really love this part time job. Another plus is that I am not a poet. And non-poets are often the ones who look like great poets!

'When it comes to Indian films, there is a mismatch between writers and film makers' 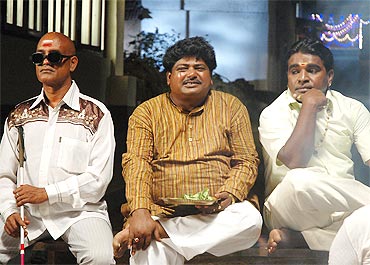 How do you define your journey so far in the film industry?

Reckless! And I am happy this way.

What do you have to say about the present state of the industry, especially the remake trend?

It's like asking what one feels about death after writing an obituary! We need second generation writers. Think tanks who can feel the pulse of the viewers is what we require. Brilliant Kannada minds are what we require. Also, one should be able to think ahead of one's time in terms of audio and visuals. Co-coordinating audio and video is another challenge. I, as a director, am also on this quest.

Do you think making films based of literary works would help change the trend?

Most Asian and Western films are based on such works. But when it comes to Indian films, there is a mismatch between writers and film makers. And if this mismatch continues, there will be no remedy for that.

'There have been Hindi film offers' 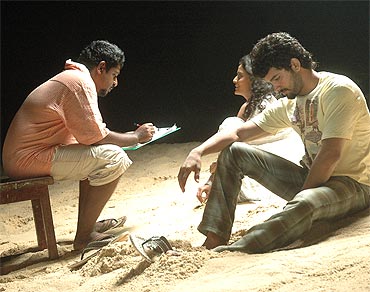 Image: Yograj Bhat on the sets of Pancharangi

What do you think are the achievements of the Kannada film industry that has completed over 75 years of its existence?

This is one question only Dr Rajkumar could have answered. All I'll say, he is gone and none can say what all went with him!

There is a film with Puneet Rajkumar. It will be my home production along with Jayanna. At this stage I can just say that it will surely come with modern age Kannada expressions. I do keep planning a whole lot of other things too. But what would have seemed meaningful in the morning would have landed up looking absurd by evening!

Have you considered the Hindi film offers that have come your way?

Yes, there have been offers, but I don't know when I will run from here. Probably that will happen only if someone kicks me out!