Sign in  |  Create a Rediffmail account
Rediff.com  » Movies » Vidhubala: Acting is a closed chapter for me now

Vidhubala: Acting is a closed chapter for me now 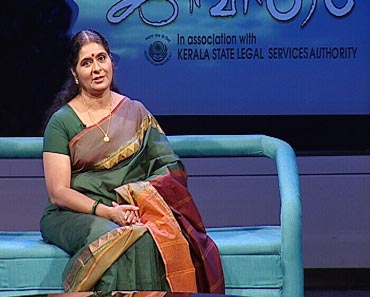 Vidhubala, daughter of the famous magician, late Prof Bhagyanath and sister of National Award-winning cinematographer Madhu Ambat, was star in Malayalam years ago.

Vidhubala hosts the courtroom drama Kathayallithu Jeevitham on Amrita Television (like Kiran Bedi in Hindi). The show deals with family disputes and solves the issues on the studio floor itself. The verdict is legally valid.

How did the show come to you?

The producer of Kathayallithu Jeevitham Manoj Manayil wanted me to host a court room drama he was planning. My first reaction was, "Will I be able to do a show after such a long gap?"

The producer explained the format in detail. He was of the opinion that as I am a woman, it would be easy for the participants to take another woman into confidence. I was the choice as I am a homemaker first and also have acceptance from the family crowd.

I was told that this is the only show in the history of television which gives a verdict that is equivalent to a civil court order. The victims get an out of-court settlement on the issue and Kerala State Legal Service Authority (KELSA) makes it legally valid.  When the producer enlightened me on these details, I was really impressed.

'My confidence was low and I had many questions' 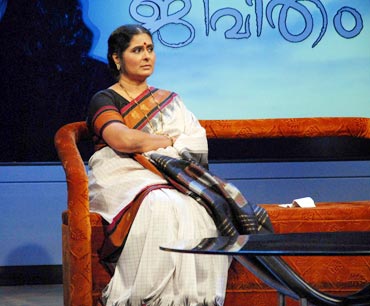 How was it like to face the camera after such a long gap?

To be frank, I was shivering. Thirty years is a long time.  My confidence was low and I had many questions.  I have done many films but then we had well written scripts and dialogues. This show demands much more.

I have to listen to the participants, talk to them and try to get the real issues out of them and then mediate. You can't take sides.

Were you apprehensive about the success of the show?

Initially, yes. Family is like a gift of god to you. I believe in this and I feel really bad when people spoil the gift of god over petty issues and fight with each other. Startling facts show that family disputes are at an all time high in our state. So the show decided to concentrate on the issue of family disputes. But bringing two sides on a common platform was the real challenge for the production team.

When I got to know the format, the question that came to my mind was, "How are they going to bring the plaintiff and defendant to the studio floor?"

Everyone I talked to also had the same apprehension. Ours is a closed society and nobody likes to share their problems.  Opening up, and that too in public is not something many would even think of doing. But I was convinced that if the program overcomes the initial hiccups, it will be a big hit. 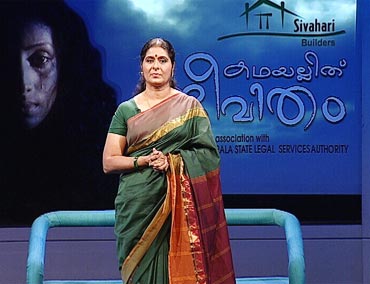 What was the first episode?

The first episode was about a land dispute between a widow and her father-in-law. By God's grace, we were able to solve the issue and give them a fair verdict. We have tried to settle most of the case which came up to us.

I must say Kathayallithu Jeevitham is an eye opener to me.

How do you validate the agreement reached on the show?

KELSA even arranges advocates to handle case for poor people. When our production team approached KELSA committee, they were ready to give their expertise and also agreed to be associated with Kathayallithu Jeevitham.

One judicial member, an advocate, a social worker include the KELSA panel. A verdict endorsed by the KELSA can't even be appealed in higher courts. 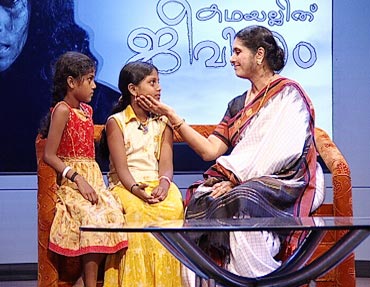 Image: On the sets of Kathayallithu Jeevitham

Which episode touched you the most?

In one episode we took up parental issue. We called the two kids with their mother and also the estranged father to the show. During the show when the kids called him father, he outrightly disowned them saying that he was not their father. This incident was very disturbing for me.

Another case was about a very stubborn mother who does not like her son and neglects him. Being a mother, I was really taken aback by her behaviour.

But the episode that brought tears to my eyes was the reunion of a 6-year-old boy with his father. They were seeing each other for the first time on our sets and the moment was very touching. When they hugged each other, everyone on the sets was in tears.

When we solve an issue, the relief we get is unexplainable. That night I sleep with the feeling that in this big bad world, we were able to do our bit.

'I am writing a book on my father' 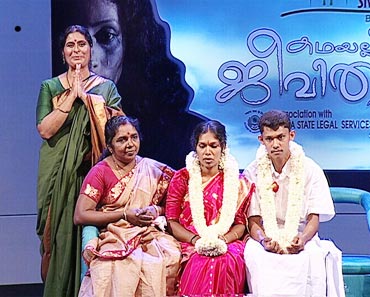 Image: On the sets of Kathayallithu Jeevitham

Other than the TV show, what keeps you busy?

I have completed a script for a film which we are planning to shoot by 2011.  The preliminary rounds of discussions are going on.  The star cast will be huge. It will be directed by Sharada Ramanathan. I have already done some post production work for her Tamil film Sringaram.

I am also part of some of my brother Madhu Ambat's projects. In fact, I have been a part of some of his projects like a documentary on Lalgudi Jayaraman. As I am a trained dancer, I assisted him in the making of a docu-film on 22 Dance dramas on the Ramayana. It was originally choreographed by Rukmini Devi Arundale. It was an experience to cherish.

I like dubbing and I have lent my voice to many actresses in the recent past for films like Naalu pennungal of Adoor Gopalakrishnan.

I am also writing a book on my father.

Any plans to come back to cinema?

I did almost 100 films in the past but acting is a closed chapter for me now.