Image: A scene from Kudumbasree Travels
Meghna George in Kochi

Malayalam actor Jayaram is a happy man. And why not? With prestigious projects in his kitty, Jayaram has every reason to be happy.

There's Fo(u)r Friends, directed by Saji Surendran, which will hit the theatres soon. Right now he is shooting for debutant director Kiran's Kudumbasree Travels with Bhavana as his heroine. Vysakh's Seniors and Rafi-Mecartin's China Town will also start rolling soon.

You look totally different without a moustache in Kudumbasree Travels...

[Smiles] My character, Aravindan, lives in a remote village and is quite popular in his hometown. He is a Chakyar koothu artiste and is on the lookout for a girl who is a performer just like him. Finally he finds one in Aswathy (Bhavana), who lives in Kochi. She is educated and wants to marry a koothu artiste. So Aravindan and his family, friends and some villagers are going to the city in a bus called Kudumbasree Travels.

It is a humorous film and I haven't done a village character for some time now. We wanted to present the character in a new mould and decided to take the moustache off. How was it shooting for Fo(u)r Friends? Director Saji Surendran is on a dream run...

It was a great experience shooting for the film and I am eagerly looking forward to the way the audience will react to it, as this one is not quite a laugh riot like Happy Husbands, my earlier film with Saji Surendran. It is narrated in a different mood. There are lots of lighter moments in it, though.

How was it shooting with Kamal Hassan?

He was really happy with the script and was ready to be part of it when I went to him along with director Saji Surendran. We were all ecstatic when he agreed to do the cameo. It was a wonderful experience shooting with Kamal Hassan. He added his own style and more substance to the character. 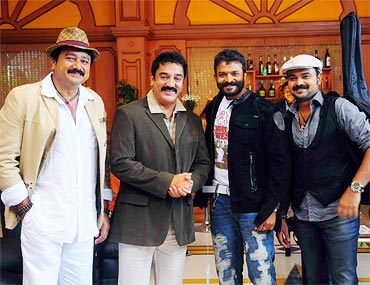 It's election time in Kerala. You have been active in politics during your younger days. Do you still have those memories?

[Smiles] Of course, it was fun. Recently I was driving via Kalady and it was college elections at the college, where I studied. I took my family inside to show them what it was all about and how the candidates asked for votes with folded hands. Those scenes reminded me of my own college days, when I used to do the same.

The political satire Sandesham, where you played a politician, is regarded a cult film now.

Sandesham remains fresh even today and more importantly, it has more relevance now though everything around may have changed. Politics and politicians remain more or less the same.

'I am teaming up with Mohanlal and Dileep in China Town' You are going to be part of two high profile multi starrers -- Seniors and China Town?

Yes, Seniors is being directed by Vysakh with me, Kunchacko Boban, Biju Menon and Manoj K Jayan in the lead. Our characters are going back to the college after 14 years since they passed out, once again as students. It is going to be a fun ride.

In Rafi-Mecartin's China Town, I am teaming up with Mohanlal and Dileep.