'Kamal Haasan is the highlight of Four Friends' 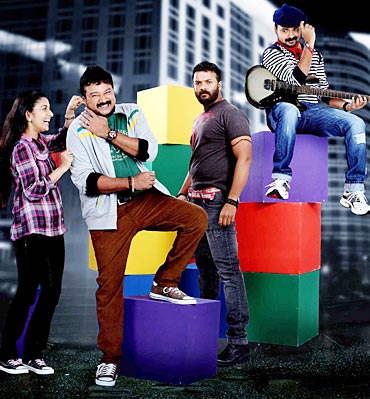 Image: A scene from Four Friends
Reshmi Padma in Thiruvananthapuram

After making two hit films, director Saji Surendran is all geared up for his third release Four Friends which hits theaters today.

So what is the Malayalam movie about? Reshmi Padma finds out. Excerpts:

What is going through your mind as the film releases today?

Of my three films, Four friends is closer to my heart. We did the project with great passion. The film is releasing today in 72 theatres all over Kerala. Till the response to the morning show and noon show comes in, my heart will be heavy. I hope people will receive the film warmly and make it a hit.

The highlight, I would definitely say is the presence of Kamal Haasan. And for the first time, Jayaram is being paired opposite Meera Jasmine. We have remixed a hit song from Sholay too. Legendary singer Yesudas is singing with his son Vijay Yesudas for the first time. Sankar Mahadevan and Udit Narayanan are also singing a song for the first time in our film. These are some of the highlights of the film. 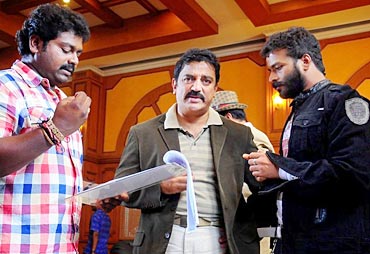 Image: A scene from Four Friends

How did you rope in Kamal Haasan for your film?

All credit goes to Jayaram; he was the one who initiated it. We are proud to take the credit for bringing Kamal sir back to Malayalam films after 23 long years. While working on the script itself, we were of the opinion that the character should be handled by none other than the great actor himself.

And when we approached Kamal sir, he was more than happy to be associated with the film and said he would do any thing for a friend like Jayaram.

His character has a social message to give which all individuals should know. It looks very convincing when he delivers it.

How was it directing a great actor like Kamal?

It was a great experience. When I said 'action' for the first time to him, my heart was literally in my mouth.  I didn't know how to direct a legend and a great film maker. To my surprise, he was like a child, ready to do whatever the director wanted.

There are no roles that he has not done, yet his approach to the film was as if it was his first film. The amount of sincerity he puts into the role is really admirable. He is a perfectionist; he kept on asking me what I wanted from the shot.

We shot his part in a hotel in Chennai and he was there before time with 15 costumes and was consulting our team so as to which costume we preferred for the scene.  He is such a nice and down to earth person and a thorough professional to work with.

Working with him was like a dream come true.  I have only limited ambition, and directing an actor like him was not even in my wildest dreams. But it happened. I think when we put in lot of hard work god pays back to us in such a way and I consider this as a gift from god. 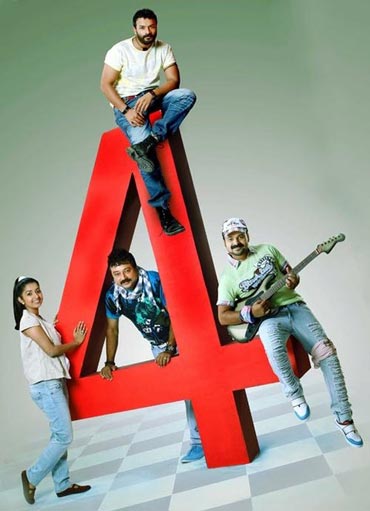 Image: A scene from Four Friends

Your second film was inspired from the Tamil film Charlie Chaplin and the Hindi film No Entry. Is Four Friends also a story inspired from any film?

No, four friends is an original script. We have a core team which includes Krishna Poojapura, Sugathan, Anil Nair (the cinematographer), my brother and myself. We travel together sometimes and then sit down to work on a script and all my films are outcome of the bonding we share.  This film also happened like that.

The film is a story of four friends told in a fun way. Jayaram is Roy, a rich man who is a globetrotter, Meera Jasmine is Gauri, an MBBS student while Kunjako Boban is Surya, an employee in a firm. Jayasurya is Amir, a man from a poor background who forms the four friends' team.

You have repeated Jayaram and Jaisurya. Why?

That is because I am comfortable working with them. We share great rapport and my two films demanded their presence. As you all know Jayaram is an actor of great calibre and the lead role in Four Friends demanded great acting skills.

Jayasurya has great potential and his performance in my film is outstanding. His role in Ivar Vivahitharayal fetched him some awards also. 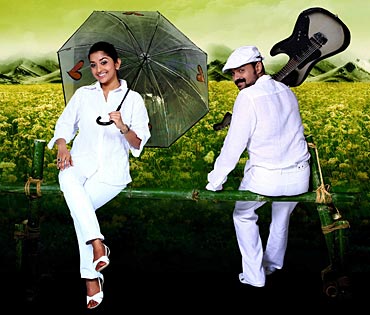 Image: A scenef from Four Friends

All your earlier films have remix songs in them. Even Four Friends has a remix song from Sholay.

In my first film Ivar Vivahitharayal, the script revolved around a newly wed young couple and a situation which demanded a song where the male lead describes his wife in a particular way. In the history of Malayalam cinema, no song can match up to Poomukha Vatikkal from the film Rakuyilin Ragasadhasil in the way wives are glorified. So, music director M Jayachandran suggested that we remix the song. And it got noticed in Ivar Vivahitharayal.

Yeh Dosti from Sholay epitomises friendship, and our film is about real friendship. So in every sense it suited our film. We bought the rights and used it in our movie.  Udit Narayana and Sankar Mahadevan have sung the song which is picturised in Guldalpet in Mysore.

Why do you make only comedies? These days comedies have become crass...

All my serials dealt with serious subjects and attempting comedy is something new to me. I like films of this genre, and I am a great fan of Priyadarshan sir. I have seen all his early comedies.

I don't think comedy is crass now.  Everyone in this film will leave a lasting impression with their performances.