Image: A poster of Arjunan Saakshi
Meghna George in Kochi

Prithviraj is riding high after the success of his film Anwar. His next is scenarist-director Ranjith Sankar's Arjunan Saakshi for which pooja is slated for November 1.

Ranjith, a software engineer, was noted after his maiden film, Passenger.

The film is being produced under the banner of SRT Films by S Sundararajan. The camera is by Ajayan Vincent and the music director is Biji Bal. 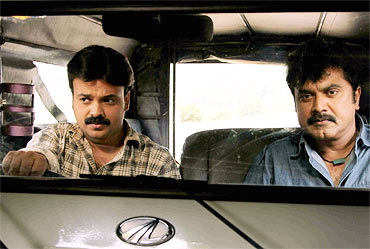 Image: A scene from Oridathoru Postman

Kunchacko Boban became quite a sensation after his maiden film Aniyathipravu (With Shalini) and has been the quintessential chocolate-hero ever since. A rough patch in his career made him disappear from the scene for a while but now he's back with a bang.

After the success of Gulumaal, Mummy & Me and Elsamma Enna Aankutty, his next is director Rajesh R Pillai's Traffic where he plays Dr Abel.

Vysakh's Seniors will see him going back to college, several years after he left the campus. Kukku Surendran's new film will see him share screen space with Indrajith and Mamta Mohandas. V K Prakash' Three Kings has Kunchacko playing the lead with Jayasurya and Indrajith. 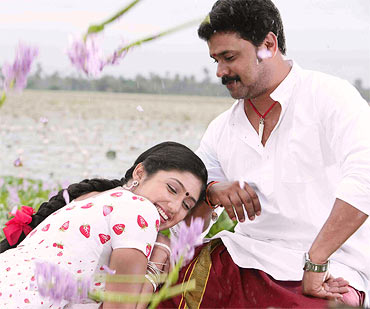 Image: A scene from Karyasthan

Debutant director Thomson's Karyasthan, with Dileep as the hero, will hit the theatres on November 5.

Scripted by the hit pair of Siby K Thomas and Udayakrishna, the film talks about the feud between two wealthy families, Puthezhathu and Kizhakkedathu.

Krishnanunni (Dileep) tries to bring the two families together and the story goes through several humorous situations in the process.

Akhila Sasidharan, who shot into fame as the anchor of a popular reality music show for kids, is the heroine. One of the highlights of the film is a song involving almost the entire small screen stars and singers. Karyasthan is being produced by Anto Joseph.