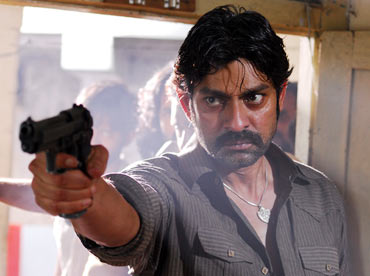 Jagapathi Babu acted in Gaayam, a landmark Telugu movie which released in 1993.

In this exclusive interview, Jagapathi Babu speaks about his experience of acting in the sequel Gaayam 2 directed by Praveen Sri releasing this Friday. Excerpts:

After about 17 years, you have made the sequel to Gaayam. Did you believe in the script to make you sign it?

Yeah. I believed in it.

'RGV is the pride of Andhra Pradesh' 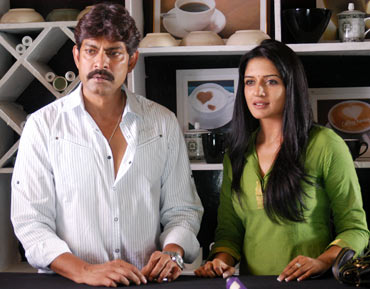 Did the fact that it was being directed by a debutante Praveen Sri, a protege of Ramgopal Varma bother you?

A lot of people approached me in the last 10-15 years saying we'll make a film like Gaayam. I didn't believe them. Gaayam was made by RGV who is the pride of Andhra Pradesh and he has taken cinema to a different level.

Praveen asked me about two years ago and I said I'm doing it. I told RGV also that I am doing it. He said nobody remembers Gaayam, why do you want to do another one? I told him it hasn't gone from people's memory and it's still shown on TV. When Praveen narrated the story with shots, I agreed and so did RGV.

What was Ram Gopal Varma's involvement in the film?

Ramu was always there following it up. I visited Mumbai and he visited Hyderabad quite a few times. He would constantly check on the phone and give suggestions as well. His heart and hand is there in the film. The basic script is by Rajendra and changes were made suitably. The basic line was perfectly connected to the original.

'Revathy is the catalyst in Gaamyam 2 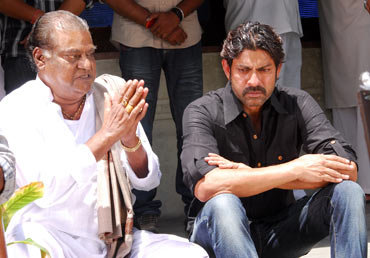 Gaayam is remembered even today. Do you think that the sequel will match up to the original?

I would say yes. Story-wise, it's big. Technically it's huge and the style is RGV's. Ilaiyaraja (music director of Gaayam 2) who saw the rushes (in double positive) said after Shiva, it's Gaayam 2. Both RGV and Ilaiyaraja are creative magicians.

Gaayam is contemporary and relevant even today. Would Gaayam 2 be relevant after some years?

Gaayam was far ahead of its times as it was made by RGV. Gaayam 2 matches the current times. I don't know how it will be years down the line. But politicians exploiting people will continue.

Does Gaayam 2 take off from where the original ended? What do Durga (the lead protagonist played by Jagapathi Babu) and Anita (the journalist played by Revathy) do in the sequel?

I can't reveal what they do. That's the beauty of the screenplay which I loved. Revathy is the catalyst. There are Ram and Durga in this film. I can't talk more on this. 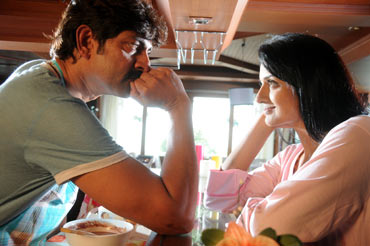 Gaayam 2 has almost the same caste as Gaayam except Urmila Matondkar. Was it a conscious decision to retain the same people?

The script demanded so and the same people were cast. Urmila was supposed to be there but we couldn't cast her.

Vimala Raman is the new entrant. How was she as a co-star?

Vimala's fun. Normally people get homesick when they are abroad but she kept us all alive and kicking in Bangkok when we were shooting.

Does she have a substantial role in the film?

She's got a major role. There's romance and sadness in her role. Though Revathy has an important character, Vimala Raman's role is more.

The late Kota Prasad plays the villain in Gaayam 2. How is his role as compared to the villain Gurunarayana played by Kota Srinivasa Rao in Gaayam?

There was coldness and entertainment in Gurunarayana's character. There is the same mix in the sequel. The son (Kota Prasad) in Gaayam 2 is ruthless and wild, hotheaded and impulsive. He triggers the whole film.

'I haven't signed any film after Gaayam 2' 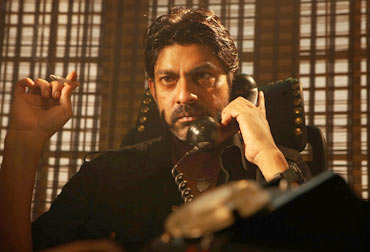 After a while, you are back in an action film...

I am happy. More than action film, I would love to do a Godfather film where there is power.

How was Praveen as a director?

His conception of shots and scene was fantastic. His sound sense was also good. After Gaayam 2, the director will be super hot. RGV has a crop of RGVs and many are imitators! But I won't blame them. Praveen delivers.

Ilaiyaraja has composed music for this film. Are there songs?

There are romantic, family songs and even a revolutionary song. Ilaiyaraja has even sung in this film.

How would you describe Gaayam 2?

As my dream film. I shot for eight months and dedicated this year to that. I haven't signed any film after Gaayam 2. I believed in it completely. If it is successful, then it goes to the unit, anything negative is mine.

'I was sleepless all through the shoot' 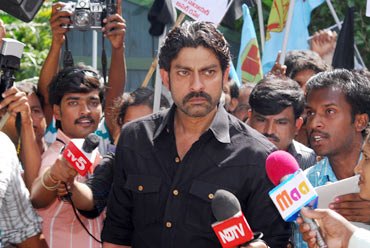 How was the experience of shooting Gaayam 2?

The best part was that it was nerve wracking. I loved it and owned it completely. Gaayam 2 was in my head 24/7. I was sleepless all through the shoot as the film was working on my mind. Gaayam made such an impression that I have to prove a point between Ramu and me that I will make a film better than Gaayam.

It's going to be a rebirth for me. I will return with a bang. Normally there's a lull before the storm, more so because my last films haven't done so well. This is the fourth-fifth time I will be coming back. My career has been like this -- after 3-4 films, I come back.

It was Ram Gopal Varma who made you dub yourself in Gaayam...

It's the modulation in the voice that matters and Ramu proved it. It is nice to be involved in other people's projects. It's give and take between actors.