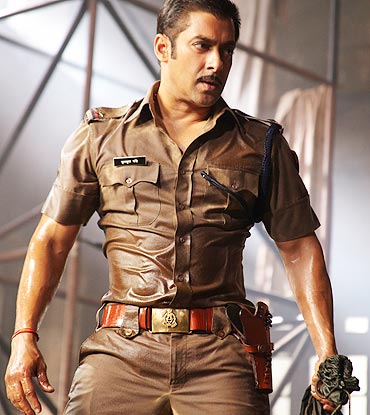 Okay, so he's played Prem more than he's played a cop. Perhaps his countless run-ins with the law have something to do with that.

Even so, there's no denying Salman Khan makes for a fetching sight in 'police ki vardi,' as Bollywood loves to remind us time and again.

What sets his Inspector Chulbul Pandey apart from the cops he's played before? For starters, that's an unusually silly name. There's also a ribbon-thin moustache to suggest his Bihari roots.

He starts out as a corrupt and irreverent policewalah but mends his ways though not methods after falling in love with the conscientious Sonakshi.

If the response to Salman's delightfully brash antics in the promos is any indication, this one's already a winner. 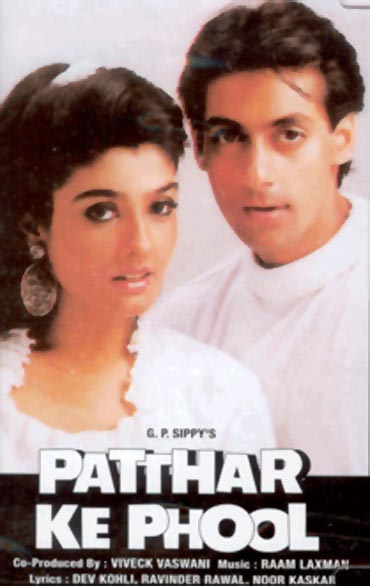 Best remembered for bon-bon ice-creams, roller-skating to Ram-Laxman's peppy soundtrack and Raveena Tandon's ravishing entry in films, G P Sippy's Patthar Ke Phool sank without a trace at the box office despite its promising cast including veterans like Vinod Mehra and Manohar Singh thanks to its seriously hackneyed script.

But a scrawny Salman is sincerity personified as a no-nonsense cop in a somewhat over-sized uniform caught in a dilemma between avenging his dead stepfather or arresting his girlfriend's criminal daddy. 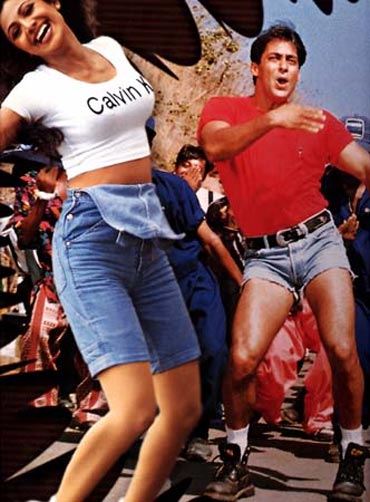 Image: A scene from Auzaar

Auzaar marked kid brother Sohail Khan's debut as director. Dare we say a mighty unimpressive one at that?

And so you can forgive yourself for not having any recollection of this Salman-led blooper also starring Sanjay Kapoor and Shilpa Shetty.

Basically, the actor plays a dynamic CBI officer appointed the uncomfortable task of investigating his best buddy's father and his alleged involvement in illegal activities.

High on terrible and disinterested performances, all you really notice is Salman's wardrobe of skimpy shorts and designer dhoti. Too stylish for a CBI types, even by Bollywood standards, no? 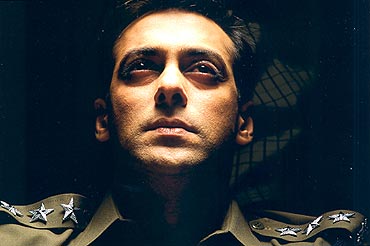 Image: A scene from Garv: Pride and Honour

Surprisingly, Salman's turn as a cop hasn't been anything to brag about. In Puneet Issar's gore-rich Garv, he plays a full-on macho cop with a penchant for punching bullets in people's head and mouthing campy one-liners.

Considering the glaring continuity glitches and loopholes in the plot, Salman, take it or leave it, is the only redeeming feature of this explicitly annoying tripe. 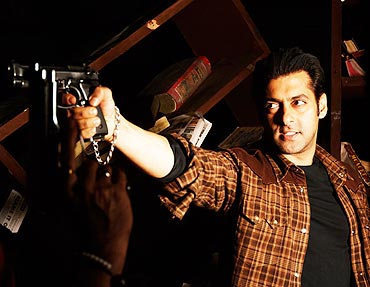 It's quite unlikely that anyone could have evoked the kind of reactions like Salman did with Wanted, director Prabhudeva's reworking of Telugu super-hit, Pokiri.

As an undercover cop blending in anti-social elements, the beefy star's larger-than-life aura and unruffled attitude raises Wanted's cheesy, implausible temperament to a comic book-like fervor. That's Salman's brand of 'commitment' for you.

Not only did he single-handedly carry the film to its blockbuster outcome but also got a much-needed reprieve following disappointments like Marigold, God Tussi Great Ho, Saawariya, Hello, Heroes and Yuvvraaj. Wanted 2, anyone?