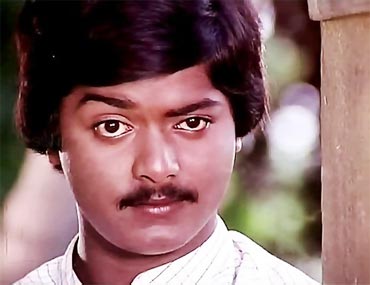 Murali was part of the mild and sensitive brigade of actors, more willing to shed a tear in honour of romance than indulge in fits of unruly violence.

Famous for roles that portrayed him as a perceptive singer or lover who pines away for his beloved, he had no airs about himself, either on-screen or off. This isn't to say that he played only the beleaguered lover; by turns, he was a strong brother, caring friend, a formidable warrior and rollicking funny-man too.

In over a 100 films, Murali managed to entrain Tamil cinema fans with engaging performances that brought gentle romance and unrequited love into fashion, over the 80s, 90s and early 2000s.

We pay tribute to the actor who passed away on Wednesday by looking at some of his most memorable works.

Director Ameerjahn's debut movie happened to be the first film of Kannada director Siddhalingiah's son as well. The fact that Ameerjahn was the protege of K Balachander was an added bonus.

Set in a college campus, the film explored many of the cliches typical of the genre but newcomer Murali made the experience memorable with his sincere work. Be it romancing Kuyili with Ilaiyaraja's chartbuster Athadi Paavadai Kathada, or going on an emotional roller-coaster, or even beating up his father's evil henchmen, Murali proved that he has what it took, to be an actor in mainstream Tamil cinema.

The movie won him rave reviews, and proved to be an ideal debut vehicle. 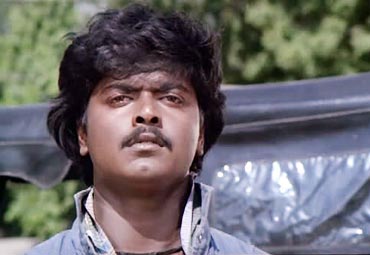 Image: A scene from Pagal Nilavu

Those were the times when a young film-maker called Mani Ratnam was just beginning to make his mark in movies. This particular venture was all about a young man who owes loyalty to the local goon but falls irrevocably with the sister (Revathy) of the newly arrived local inspector.

Poovilangu might have been his first film, but it was in this movie that Murali had a chance to flex his acting muscles, so to speak. His performance, a mixture of intense love, mischief and a roller-coaster ride of emotions put him firmly on the path of celebrity-dom. Not to mention the fact that the romantic tracks, such as Poo Maalaiye, and Vaarayo by Ilaiyaraja helped.

Murali, the actor, seemed to have arrived. 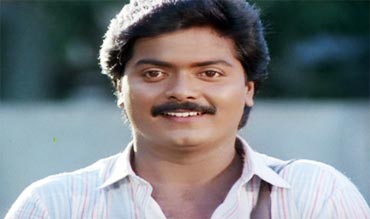 Image: A scene from Pudhu Vasantham

Perhaps director Vikraman had some inkling that this movie might be successful but not even he might have known just how it would re-write history at the box office.

The tale of four friends who eke out a hand-to-mouth existence with dreams of making it big in the musical world, Murali plays a sort of lead, who more or less is the unnamed head of the impromptu group.

When they literally run into a hapless young woman (Sithara) for whom they must care, all sort of complications develop.

Of added significance was composer S A Rajkumar's lilting, simple melodies. The public were enamoured of a movie that finally addressed the issue of friendship between an unrelated man and woman.

Murali played his character with elan -- his soft screen-presence, kind-heartedness, unwillingness to take advantage of a girl obviously traumatized and eventually, the idea that friendship triumphs all -- these were all factors that propelled the film to victory.

Murali was now a star. 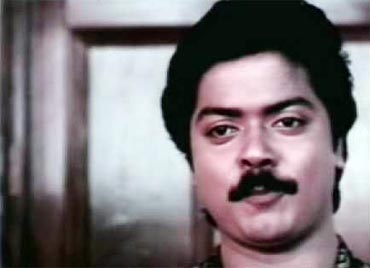 Image: A scene from Idhayam

Having achieved success as a romantic who puts emotions on a high pedestal, it wasn't surprising, perhaps, that Murali should attempt more of the same, and win more hearts while at it.

In director Kathir's path-breaking romantic debut, he played a medical college student who is enamoured with his college-mate (Heera), but simply cannot bring himself to express his feelings, for fear of rejection.

The tautly woven screenplay gave ample opportunities for Murali to give full reign to what would later become his signature -- heart-breaking sorrow that eventually debilitates him, accompanied by a latent insecurity that keeps him from telling the object of his affections about his real feelings.

With Ilaiyaraja's magical score consisting of chartbusters like Pottu Vaitha Oru Vatta Nila, Idhayam's chief USP was not a super-hero who beat down opposition but a young man who represented every youth ever batted by the winds of romance, and who desperately wanted to succeed in winning his beloved, but couldn't.

Murali fitted the role to a T. 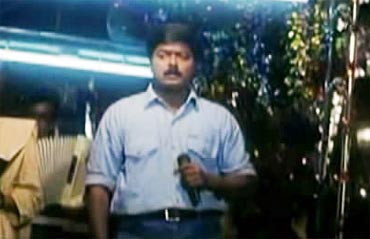 This was the age of technology; old-fashioned romance had slowly but steadily lost its charms and it was felt that a fast-paced life, increasingly overwhelmed by the need to earn was overtaking life itself.

Into this scenario came Murali, breathing life into emotional stories by playing a singer who falls for the sound of a beautiful voice, a young woman who swiftly becomes his heart and soul. He pines for her, yearning to see her in person, but the path of true love is never easy.

Deva's Oru Mani, the romantic chartbuster of the year played a large part in the film's success, but it was chiefly Murali's own performance, that of a normal guy who's suddenly in possession of something too good to be true, that won accolades. 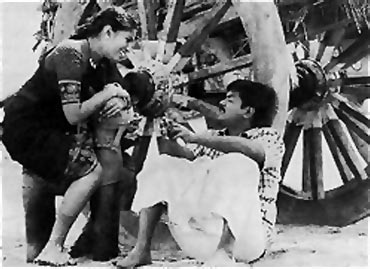 Image: A scene from Porkkaalam

After a spate of not-so-memorable movies where, though he did vary his performances, he didn't set the box office on fire, arrived Cheran'a master-piece.

Set in the barren wilds of Tamil Nadu, Murali played a potter whose biggest ambition in life is to find a suitable groom for his mute sister. Along the way, he stumbles into romance with a pretty weaver (Meena) as well and though it seems pretty straight-forward in the beginning, complications arise.

Though a slight variation on the usual, Murali proved what a consummate performer he'd become: his helplessness in hunting for a groom, simple pleasure in finding love, obvious affection for his sister and anger at his irresponsible father's antics tugged the hearts of viewers.

Here was a simple man, willing to succeed at any cost; it was hard not to empathize with him at every turn. With Deva's Thanjavooru Mannai Eduthu becoming a chartbuster, this movie really did begin a Golden Age in Murali's career. 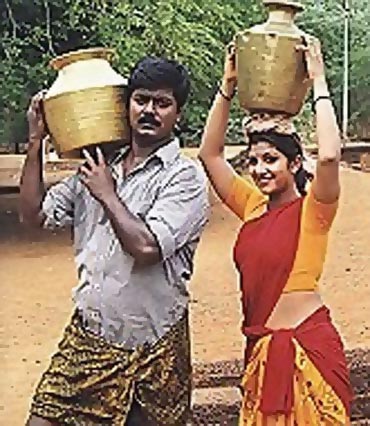 Cheran's predilection for a hero who understood the way he wanted his character portrayed continued; here, Murali was a part of an ensemble cast; a young man who, tired of the games played by corrupt politicians, finally decides that enough is enough.

An idealistic leader in his own right, his role was to kidnap the Chief Minister and teach him a lesson about how the other half lived.

Murali was still a high-minded youngster whose visions about the future were rosy, to say the least but he was a shade firmer, just a bit sterner than his usual portrayals. The film might not have set cash-registers ringing, but this new, steelier version of the actor did turn heads.

Obviously, Murali had now become some sort of a lucky charm for director Cheran and he did prove lucky the third time too.

Like many of the director's movies, this one too was message-oriented, detailing the pitfalls faced by avid men keen on going abroad for work, and falling into the hands of unscrupulous agents.

Murali played a young man bereft of all his hard-earned money, afraid of meeting his family, who then finds help in an unexpected way: switching places with someone in a similar position, Parthiban.

Murali won honours with his portrayal of an honest man, filled with the burning need to earn for his family, yet heart-sore with having to lie to them about his circumstances.

Stern at times, sorrowful at others, but with a core of determination to succeed, Murali made audiences cheer, finally, when he won against all odds. 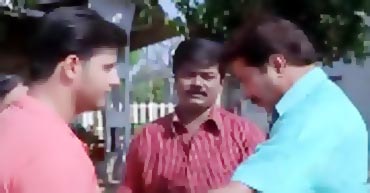 Image: A scene from Anandham

Ego hassles were never a part of the man. Murali proved this when he became a part of yet another debut film, this time, by director Lingusamy.

The tale was of four brothers whose love for each other overcomes all odds, financial or familial. Murali played the second brother, always led by the elder, but willingly so. It touched the hearts of many to see such heartfelt affection, and unquestioning loyalty.

Murali's sincere portrayal brought with it the intensity and devotion required of his character; once again, the mild-mannered hero had won. 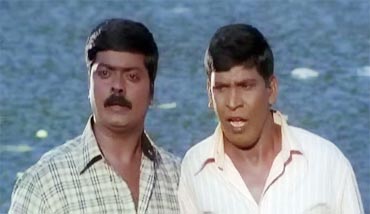 Image: A scene from Sundhara Travels

A remake of the Malayalam hit Ee Parakkum Thalika, Murali proved that he had an unexpected flair for comedy, as he embarked on a hilarious bus-ride in company of resident comedy-man, Vadivelu.

Saddled with a rattling bus and a romantic interlude that came with its own share of problems, not to mention a recalcitrant mouse, Murali walked away with honours for having delivered something different, not to mention holding his own against accredited comedians.