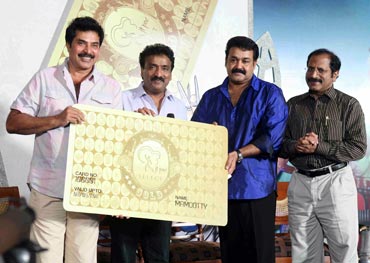 Two of the biggest heroes of Malayalam cinema -- Mammootty and Mohanlal -- joined hands last week to launch the 'community sponsorship programme' organised by the Jose Thomas Performing Arts Centre (JT PAC) in Kochi. Mohanlal is the chairman of the centre.

The programme enables the members to watch the performances from the top artists from various parts of India for one year.
Artists like Pankaj Udhas, Udit Narayan, Pandit Hari Prasad Chaurasia, Ustad Amjad Ali Khan, Naseeruddin Shah and many other noted names have performed at JT PAC in recent months.

Speaking on the occasion, Mammootty said that he always had dreams about starting such a stage to bring the best performers in the country on to one platform.

On the acting front, the two biggies are back with a bang now, with Pranchiyettan & the Saint and Shikkaar. 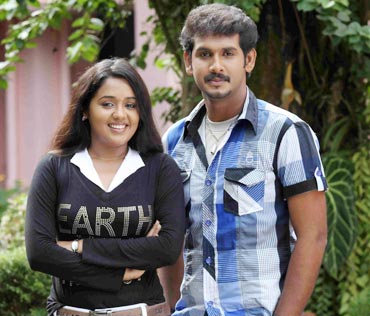 Meanwhile, Rajasenan, who has directed several blockbusters like Melepparambil Aanveedu, Aadyathe Kanmani and Aniyan Bawa Chettan Bawa in the past, has started shooting his latest venture titled Oru Small Family.

The film stars Kailash, Ananya as well as the director in an important role.

The film revolves around two families, one that became rich by making illicit liquor and the other, of a sub-registrar, who is vocal against the use of liquor.

The boy (Kailash) from the first family falls in love with the sub-registrar's daughter, played by Ananya. 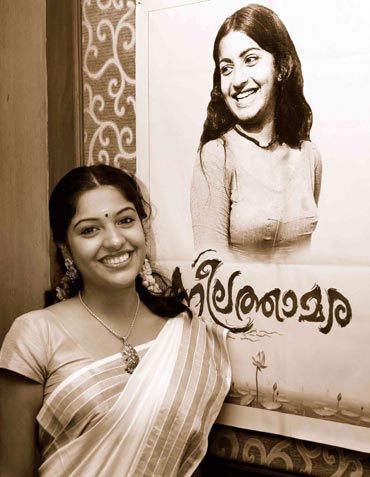 Looks like the success of Lal Jose' Neelathamara, a remake of a yesteryear film scripted by M T Vasudevan Nair and directed by Yusuf Ali Kechery, has spawned a number of remakes.

A perfect example is Aleppey Asharaf's Ninnishtam Ennishtam that starred Mohanlal and Priya in the lead, which is being remade now.

Another film that is getting an altogether new look is Rathinirvedam, the yesteryear classic directed by the late Bharatan.

The next investigation saga from the ace on-screen detective Sethuramaiyer of CBI Diary Kurippu fame is being discussed these days.

Shaji Kailas and Ranji Panicker have been planning to make a sequel to the blockbusters, Commissioner and The King while director Haridas Kesavan is getting ready with a sequel to his earlier film, Kannur, titled Veendum Kannur.

Tulasidas has just launched the sequel to his yesteryear comedy, Kasargode Kadarbhai, which in fact is a sequel to the film, Mimics Parade.