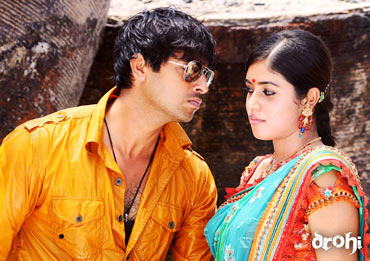 Image: A scene from Drohi
Shobha Warrier in Chennai

Srikanth burst into the film Tamil scene with the hugely successful Rojakoottam. After being hailed as one of the bright stars of Tamil cinema, he disappeared from the film industry for a year to come return with his mentor's film Poo. But Poo was essentially Parvathi Menon's film and it did not help Srikanth in any way as an actor. It was followed by some very forgettable unsuccessful films.

Now, he has made a comeback with Sudha K Prasad's powerfully made Drohi. The violent film is a kind of homage to the friendship films of the seventies made in the Ram Gopal Varma style of film-making.

The two male protagonists are played by Srikanth and Vishnu, and Srikanth has given the best performance of his career.

In this interview, an elated Srikanth talks about Drohi and more

Is Drohi going to be your comeback film?

I hope so. I am fortunate that I got good reviews after a long time. I hope that the phase I've been going through as a result of wrong selection of films is finally over.

Why did the wrong selection of films happen? You started off with some good films

Sometimes, when you hear a story, you get carried away by the narration and feel it will turn out to be a good film. Sometimes, due to obligations, you accept a film.  I know I can't blame anyone else for my wrong choice of films. My last three films gave me a very bad name and after that, I became very cautious.

'I had to look younger than Vishnu in the film' 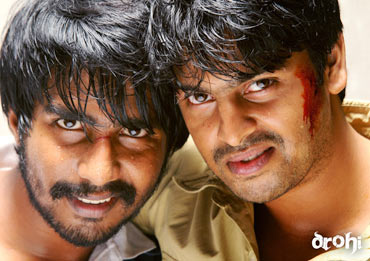 Sudha told me in her interview that you initially refused the film, and that she had to talk to you for 45 minutes to convince you to do her film. Why did you refuse the film initially?

That was because of a parallel character which I thought would overshadow my role in the film. I was already under a lot of pressure because of the failure of my last few films. So many insecurities came to mind. But Sudha convinced me that the character would have an impact and I needed to concentrate only on my character. She said, "you do justice to your role, you will get the benefits." I must thank both Sudha and Mano (Akkineni) the producer for their confidence in me.

How did you prepare yourself for the role? Samy, a Royapuram guy is quite different from what you have done so far.

When I was 22, I was acting in older roles. Here I am at 30 acting as a 26-year-old! I had to look lean so that I looked younger than Vishnu. Vishnu added mass to his body to look older than me.

Not only that, Vishnu has just entered the film industry and people will think he is very young. I have been in the industry for the last eight years. So, I had to physically look younger than Vishnu. Otherwise, the audience will not accept me as being younger than Vishnu.

I also had to sound younger. I didn't use my base voice for Samy. He is a laid back character with an intoxicated look. I wanted the audience to forget that I was Srikanth; I wanted them to only think of Samy and not Srikanth. I think I succeeded in that.

'It was difficult for me to act like an uneducated goon' Did you go to Royapuram to observe the youngsters of that area?

First, I watched a lot of footage about the Royapuram people given to me by the director. Then, I went there with Alphons Roy, the cinematographer. I stayed there for a week, mingled with the people and made quite a few friends too. Once you get to know them well, they are very nice, and it was easy to shoot there unlike what we hear. We have heard that they were very hostile and would not let anyone come near them. It is not so; it all depends on how you mingle with them. I made an effort to be friends with them. Instead of travelling by car, I rode my bike wearing casual clothes. We used to play cricket almost every day.

Once the shooting started, I would ask the Royapuram guys who acted with me to teach me to say the dialogues right. I listened to the way they talked and then I spoke that way.

I did my homework that way and it helped me a lot.

Was it difficult for you to be Samy?

It was very difficult. As an urban person, it was difficult for me to act like an uneducated goon. I also had to darken my skin.

Sudha said she wanted a good-looking fair-skinned actor as Samy...

I was really surprised when she said the same thing to me. Samy is a Brahmin boy who goes astray. She said the surroundings had to look dirty but Sami had to look charming. So, she took a lot of effort to see that I looked like Samy.

'Suriya said he expected a lot from me' 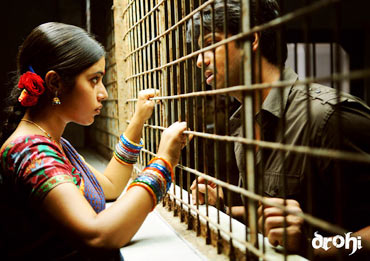 Did you expect this kind of appreciation for your performance?

Let me be honest. I never expected this kind of appreciation. I knew I had done my job with all sincerity, but that was all. It feels very nice when people from the industry call and say good things about your work.

I was touched when someone said I looked like the younger brother of Srikanth. I was moved when another actor asked me where I had hidden my talent until now. Suriya was so nice and generous to send me an sms saying that the trailer looked good and he expected a lot from me. It was nice of an artist of his stature to let me know what he felt.

I feel so happy when your contemporaries and the industry appreciate your work.

'Vishnu and I were really exchanging blows' 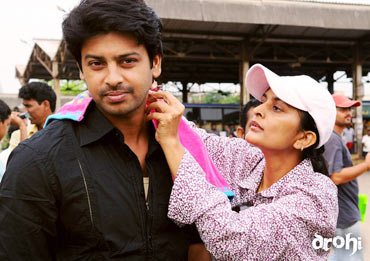 Image: Srikanth gets ready for a shot

Were the action sequences between you and Vishnu tough?

It was very tough. The fight composition was very raw. After getting beaten up, I had to recover fast enough to punch Vishnu. A lot of times, we were really exchanging blows. As he wore boots and I wore only slippers, the kicks were really bad. He had the additional advantage of 15 kilos on his body. Sometimes, his blows really hurt me and when it hurt, I also gave it back [laughs]. But I would apologise to him soon after.

Both you and Vishnu had equal footage in the film. Were you two cordial to each other?

Of course, we were cordial and friendly. And that shows on screen too. But let me be frank, I had my own insecurities. I knew I would be compared with a guy who is only one film old. I feared people asking me, what's the use of being in the industry for 8 years and doing 15 films?

Despite my fear and insecurities I shared everything with him because it was ultimately the film that had to come out well.

Yes, I was very selfish as far as my role and performance were concerned. I must say the boy was really nice and he has performed brilliantly. It is a nice feeling when both of us are appreciated.