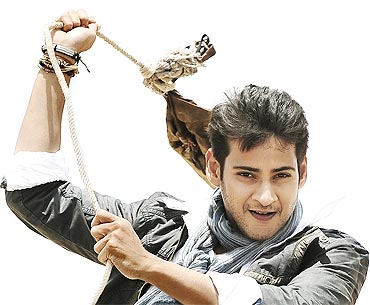 Image: A scene from Mahesh Khaleja
Radhika Rajamani in Hyderabad

Telugu star Mahesh Babu has been keeping his fans waiting desperately for more than two and a half years for his new film.

Mahesh Khaleja scripted by Trivikram Srinivas has been in the making for quite some time.

Produced by Singanamala Ramesh and C Kalyan, the film is directed by Trivikram Srinivas and stars Anushka.

The last time Trivikram and Mahesh collaborated was Athadu in 2005 which was a hit. Known for his good writing skills, Trivikram turned director with Athadu and later directed Pawan Kalyan in Jalsa.

The combo of Trivikram and Mahesh is expected to set the box office on fire. Though nothing much is known about Mahesh Khaleja, it is supposed to be an action-packed entertainer. 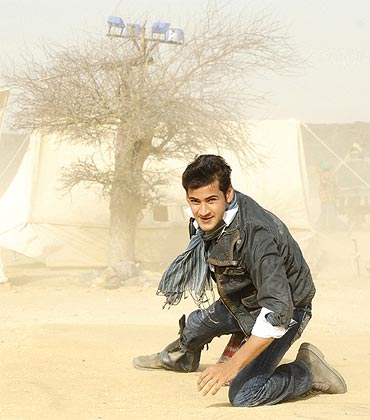 Image: A scene from Mahesh Khaleja

Mahesh, who has quite a few Nandi and Filmfare awards to his credit, created a sensation with Pokkiri. The handsome six-foot actor, who is rather reticent, is now interacting quite a bit on Twitter. In fact he unveiled the logo of his new film on the micro-blogging site.

Mani Sharma, a Mahesh favourite, is composing the music for the film. The film is shot in many places like Pune, Hyderabad and Rajasthan.