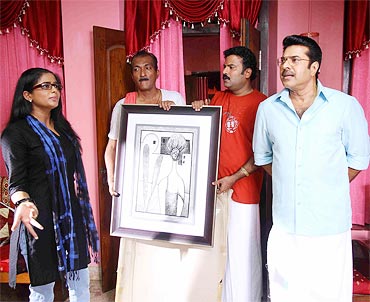 Image: A scene from Pranchiyettan and the Saint
Meghna George in Kochi

After months of no hits, the Malayalam film industry finally has something to cheer about.

The recent superb performance of three Ramzan releases has put an end to the drought that has been plaguing the industry for months now.

Mohanlal's Shikar and Mammootty's Pranchiyettan & The Saint did very well. Even director Lal Jose' Elsamma Enna Aankutty managed to do good business despite no big names in the cast.

The successes of the films have also reiterated the box office credentials of the two super heroes. 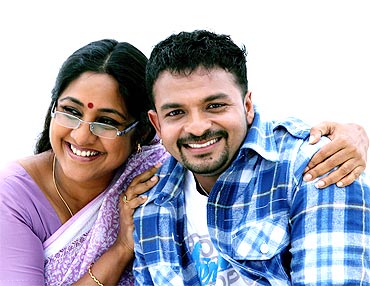 Image: A scene from Payyans

Jayasurya is the hero in writer-director Leo Thaddeus' film, Payyans. The shooting of the film has started in Alappuzha and will shift to Kochi soon.

The film is set in Fort Kochi, and the story is about a young man named Josie (Jayasurya) who is so careless about life. He is yet to complete his engineering degree and depends on his mother Padma's (Rohini) income.

His dad, John Varghese (Lal), a marine engineer, has been missing for several years now. The story is about how Josie later becomes disciplined in his life.

Leo has earlier directed Pachamarathanalil, with Sreenivasan and Padmapriya in the lead.

It's Vinayan against the world 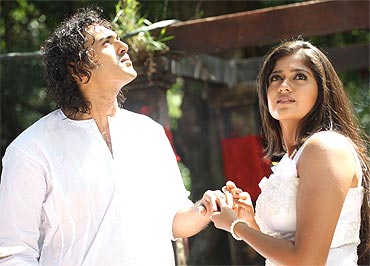 Image: A scene from Yakshiyum Njaanum

Director Vinayan has always been part of one controversy or the other in his career. After taking on the entire Malayalam film industry's resistance, he succeeded in coming out with his Onam release Yakshiyum Njaanum.

Now the producer of the film Reuben Gomez has alleged several serious charges against the director. Gomez says that Vinayan has taken him for a ride and misrepresented several facts. He even said that the director wanted him to take on FEFKA general secretary B Unnikrishnan physically.

Vinayan was quick to deny these charges and said that he will file a case against Gomez for his allegations. It seems the sparks are going to fly with both the parties on a war-path now.