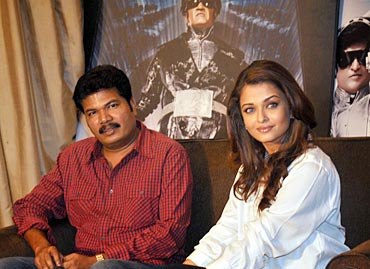 After Mani Ratnam's bilingual film Raavan, Aishwarya Rai Bachchan will be seen in another bilingual called Endhiran in Tamil, and Robot in Hindi. The film is one of the most-awaited films of the year, as it stars Tamil superstar Rajnikanth.

The film has been directed by ace filmmaker Shankar, who worked with Ash in one of her earliest films Jeans.

The duo spoke at length about the film at a press meet in Mumbai. Rajnikanth, who recently gave his younger daughter Soundarya away in marriage, did not make the trip to Mumbai.

Ash seemed reluctant to talk about her character, as she wanted audiences to watch it in theatre. All she said about it was: "My character Sana is very important to the story. She is a part of the narrative."

Shankar claimed that Robot looked like a Hollywood film. "It is not a copy. It's an original story, not a regular masala film. The special effects and animation are the highlights of the movie. I am sure no one has used this kind on animation in any part of the world," he said.

The director added that Ash had improved as an actor. "She was always sharp but with experience, she has become better. In Jeans, we had to explain quite a bit to her. But in Robot, we did not have to do that. She would come totally prepared on the sets," he said.

Endhiran/Robot will release on October 1.