The dancing queen of Tamil TV 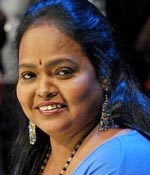 Kala Master is the queen bee of Tamil television at the moment and knows it. She has been dancing since she was five, became an assistant dance master at 12, and directed 320 students for the Miss World pageant at 26. Now, she is one of Tamil cinema's most celebrated choreographers and the creator of Tamil television's most feted dance show, Manada Mayilada, which has just completed 150 weeks.

Kala Master shares details about its journey and hers, with Pavithra Srinivasan

Manada Mayilada has crossed 150 successful weeks. How does it feel?

It's the result of sheer hard work. You literally have to slave your heart out to get a show like this running smoothly. Someone or the other will call at midnight and say, Master, I can't dance with my partner. And I have to run around, talk to them, tell them what a great opportunity this is and how they'll find their feet later on. I need to work these things out for at least five or six weeks into a new season. By the time 15 episodes are gone, the team begins to set and the dancers begin to realize what they're doing; the reach they and the show have. The sheer amount of talent they show is amazing.

How did the show happen?

I never expected to be able to do something like this. Various people had been telling me for years that I could enter the small screen, that I should put my talents to good use. But I'd never given it serious thought.

I'd just delivered my boy and I was in Kerala, choreographing songs, when I got a call from Kalaignar TV, asking if I'd be interested in doing a dance show. I decided that if I was going to head this show, I would do something different. I contacted Jaivel, a cameraman and we came up with concepts and plots to use in the show. Budgets were a huge issue. I, my husband and sister used to sit at home, wrangling over the funds and how best to use them. I ended up producing, directing and judging the show, all in one.

One of Manada Mayilada's biggest attractions is the dazzling sets. How difficult is it to come up with them every week?

My team of technicians makes it possible. Early on, I made sure that the show was going to have a lot of individuality; it mustn't be like anything on Tamil TV, before. We came up with so many different sets: Railway stations, deserts, the Egyptian set for Season 5  everything was different, and was extra creative because it had to fit within the budget.

The season 4 finale at the Nehru stadium. I don't think anyone has ever attempted that on Tamil television, before. I'd asked Simbhu to be the chief guest. He was supposed to come at 7 pm, but at 3 pm, he called and said he wouldn't be able to make it. There was no one else I could call at such short notice and it wouldn't have looked good. I begged and pleaded with him to make it somehow, and he did, with a raging fever. Until he arrived and sat in his seat, my heart was in my mouth.

Another very memorable event was the naming of the show. My team and I came up with a lot of English names, but Kalaignar listened to them and suggested this. I said it sounded ancient, but he was sure it would win. 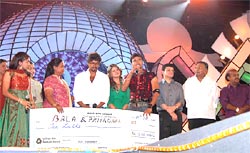 How did you come up with the judges for the show?

For the first season, my choice was Simran, but she found it very difficult to shuttle from Delhi to Chennai. She suggested that we film three episodes in one day, but I was adamant that we film only one. Each episode is strenuous, and takes out a lot from all the people involved. We need time to get everything right, without overstressing. In the end, I chose Namitha, and it worked out right.

Who would you say has benefited most from the show?

The choreographers, undoubtedly. Some of these people are incredibly talented, but had no way of expressing themselves. Some of them have really blossomed on the show. Sandy, for example, amazes me with his fans! For one show in Pondicherry, I remember there was no crowd around the dancers. Everyone was around Sandy, celebrating him! That's the kind of pull they have.

You run Odi Vilayadu Pappa too, a dance show for children. What's that experience like?

Incredible. The amount of talent children possess, their effort amazes me. Children have an instinctive understanding of dance. But sometimes, it's the parents who are more worried about the dances and elimination. I've seen parents cry when their children are eliminated from the show. It's very hard to listen to a child cry when he or she is eliminated. But you also need to understand a child's mind, when you are on a show like this. Which is why I chose Devayani as a judge. She is a mother and understands the nuances well.

How ethical is it to have children dance to adult numbers?

I usually make sure that they understand only the steps. It's not important for them to get the meaning of the lyrics, and in any case, they are usually too young to understand it. I avoid glamour as much as possible, and ask that the children be dressed properly. In fact, there was one episode in which a cute young boy was dressed in a loin cloth, because he was portraying Lord Murugan. I told the choreographers to dress him in shorts. I am very concerned that children not be exposed to anything vulgar.

Your co-judge, Khushboo, has joined politics. What are your thoughts?

Khush is very bold. She has no hesitation in expressing herself. Everybody had an opinion about her Tamil pronunciation, but she always said that considering she was a North Indian, she was doing quite well. I agree with her. She's also into social service. She'd been considering joining the party for six or seven months. When she asked for my opinion, I told her to follow her instincts. Khushboo is very versatile, she knows Tamil, Telugu, a little bit of Malayalam. I'm sure she'll do well.

Any plans to transition to the big screen?

Not on your life. The small screen does very well for me. I'd be frightened out of my wits on the silver screen!

Catch Manada Mayilada on Sundays at 7.30 pm, on Kalaignar TV.