News
Business
Movies
Sports
Cricket
Get Ahead
Money Tips
Shopping
Sign in  |  Create a Rediffmail account
Rediff.com  » Movies » 'I would love to do more reality shows'

'I would love to do more reality shows' 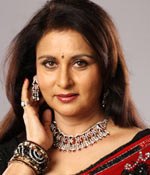 Poonam Dhillon was declared the second runner-up of Bigg Boss 3 last weekend, following winner Vindu Singh and Pravesh Rana. But she has no regrets. Her mission of connecting with a younger audience has been successful.

"It was a unique experience, living in Bigg Boss house for 84 days," Poonam said. "It would have been fantastic had I won but I am not sad that didn't.

"My children and their generation are not aware of the stardom I had enjoyed during my younger days. I participated in Bigg Boss so that the younger generation gets to know about me and be proud of me. I think my purpose has been fulfilled," she continued.

Poonam is quite happy with the way she conducted herself in the house. In fact, the actress did not get into any kind of controversy while she was inside. "My son said he was proud of me," Poonam said. "I am a quiet person, not too loud or dramatic. I heard that women liked me on this show. I have gained a lot of respect and that's worth it.

"Being calm and tolerant is a bigger achievement than being aggressive and losing your mind and dignity. I didn't want to win by doing that. Though all the three finalists were good only one could win," she added.

What did she miss most while she was inside the house? "Initially, I missed my computer," she answered. "But I learnt to live without gadgets. I am a voracious reader, so I missed reading too. I compensated the absence of books by spending all the time cooking (smiles)." 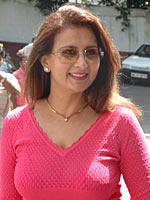 Did Poonam make any friends in Bigg Boss house? "After coming out of the house I got a warm welcome from Sherlyn Chopra, Rohit Verma, Jaya Sawant and Claudia. Sherlyn told me that she will treat me like her mother whether I will like it or not. Rohit echoed her feelings. So now I have two more children (smiles). Vindu has a lot of respect for me. He would constantly tell me how much he loved me. I don't need anything more than this because this is most important thing that you can earn in your life," she said.

Poonam was not comfortable with Aditi Govitrikar towards the end of the show. Aditi even said that she wouldn't like to see Poonam win the title. "I knew Aditi before coming on this show," Poonam clarifies. "She was nice to me for seven-eight weeks but towards the end, I felt she treated me like a rival. I know it's a game but I was surprised."

So will we see Poonam in more television shows? "I took part in the mother of all reality shows Bigg Boss. My children want me to work now. They feel they are big enough to care of themselves. Though I took a break from films to spend quality time with my children, I did some TV shows like Kitty Party and Andaaz. I would love to do more reality shows."